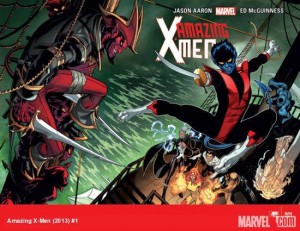 Nightcrawler fans, rejoice! The Blue Elf is back in ‘Amazing X-Men #1’. Ever since he died years back during the ‘Second Coming’ story arc, fans weren’t sold on the idea that he was really dead. I mean, it’s the X-Men, no one actually dies. However, as years passed, some fans began to think that Kurt Wagner had, in deed, actually died. But then ‘Wolverine and the X-Men’ started and we all knew that the little Nightcrawler ‘look-alikes’ running around the new school were hinting at something. Well, it seems Nightcrawler is back and just like the title, the first issue is amazing!

I liked that the comic took a panel to recap everything that has happened to Kurt. It told us about him being a mutant, a devout catholic, an X-Men, and then sacrificing himself for the future of the mutant race. If you know anything about the character, then you know he was meant to be in Heaven. But the twist comes when Nightcrawler doesn’t want to be in Paradise. Even in death he’s still an X-men and he’s missing his previous life. However, things don’t remain tranquil because his demonic father makes an appearance and Kurt, literally, jumps down from Paradise.

The issue also introduces Angelica, code-named Firestar, on her first day as a teacher at Wolverine’s school. I could connect to what she was feeling. Even if she has helped save the world countless times, and encountered aliens and what-not, no one can prepare her for all the crazy that goes on inside the walls of the school. There are a lot of comedic moments in the issue. I was glad to see the return of the gay and proud mutant, Northstar. Especially when I wasn’t sure where he would end up after Astonishing X-Men finished its run.

Jason Aaron has done a great job writing a story that hooks the reader from the start. For me, the issue was a real page-turner. The art is amazing and adds a lot to the experience, so kudos to the amazing Ed McGuinness for that.

Being a proud fan of Storm, I really liked how she took control of the situation the X-Men were facing. She is a leader, after all, and the Headmistress of the school. I’ve always enjoyed her dynamic with Wolverine, and judging by the first issue, we can expect more of that.

This seems to be five-part story focused on returning Nightcrawler to the land of the living. However, I’m not sure if he will return at the end of this all. Maybe he’ll decide he’s finally ready to enter Paradise? Whatever the case, I’ve been excited about this new series ever since the end of ‘Battle of the Atom’, and the first issue didn’t disappointment.

For those of you who think bringing Kurt back lessens the 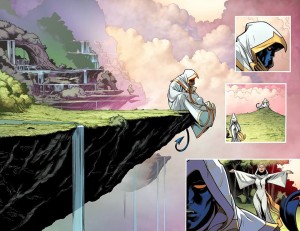 impact of his sacrifice. I would tell you all to give this series a chance. There are a lot of things that can happen. Seeing Kurt feeling unsure about his own future, to me, reflected what the fans are feeling. He seems to be torn between returning to his friends and entering the paradise which he has rightfully earned. Whether the story continues according to your expectations, judging by the first issue, one thing seems certain: it’s going to be amazing!