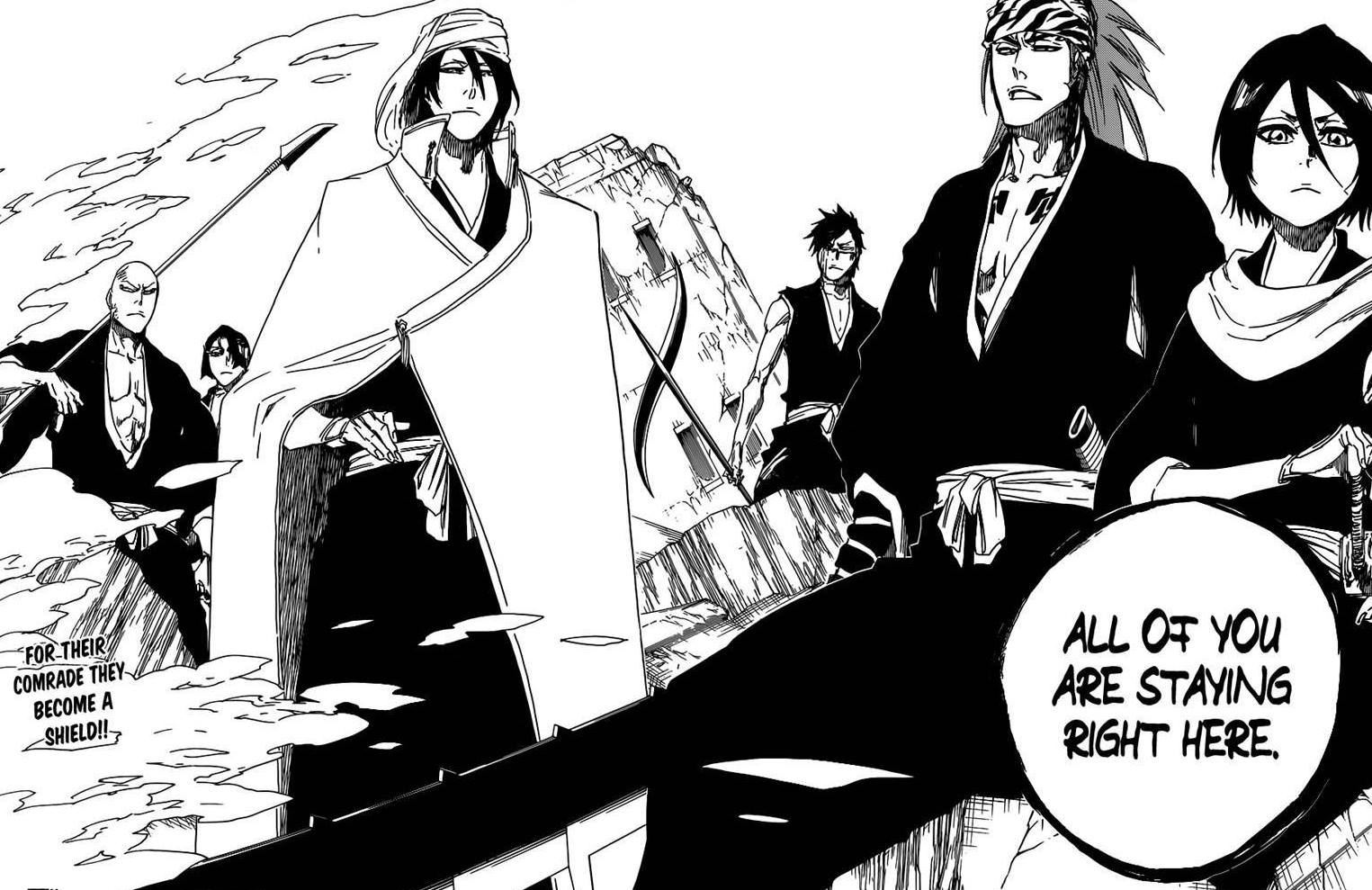 Finally something happened in this week’s manga issue of Bleach! The Headless Star 4 not only had some cool fight sequences, but reinforcements arrived, and we got to know what the Quincys’ boss planned to do.

It was revealed that the main antagonist summoned the huge beam of light in order to travel to the Soul King’s palace. I was kind of confused at first when Juha Bach thanked Ichigo and said that “the hero will take them to the light”. I thought he wanted Ichigo to become their leader or something similar. He went on to say, however, that because of the cloth Ichigo wore when he came to save Soul Society, he broke down the 72 barriers that had been in place. The said opening would exist for 6000 seconds, and the Quincys could go and attack the Soul King – and that’s why he thanked Ichigo. I don’t think the ‘zero division’ would be so dumb as to not know such a thing, because they were the ones who created and then gave the cloth to Ichigo and the rest of his allies. From the things I’ve already seen, the ‘zero division’ is incredibly strong, and I’m looking forward to seeing them battle it out with Juha Bach’s people. We all know the antagonists are going to make it into the King’s territory no matter how much Ichigo tries to stop them.

With Ichigo surrounded by eight Sternritters, I was expecting his friends to arrive soon. After hearing Juha Bach tell him about invading the palace, Ichigo made his way towards Juha Bach and the eight Sternritters tried to stop him. Their attacks didn’t do much damage, though, and Ichigo was also able to easily dodge some of them. That’s how I knew that if he had the time to battle all eight, he would have. Jazz-B caught him by the neck, but before he could attack, Renji stepped in and told Ichigo to go after Juha. I was happy to see reinforcements arrive. At the end of the issue we saw Ichigo going after Juha, who had Ishida and another Sternritter with him, while Renji, Rukia, and a few other Shinigami got ready to stop the eight Sternritters. I liked seeing Renji and Rukia standing near each other – I ship those two so hard! I’m also really excited for the six Shinigami going against the eight Sternritters. Tite Kubo has a knack for giving his characters amazing powers and skills; however, with six against eight, I don’t know what the outcome of the battle will be. We know Rukia, Renji, and Byakuya have grown stronger, but I’m not so sure about the other three Shinigami. It will surely make for an awesome fight.

As far as Ichigo battling Juha is concerned, I don’t think Ichigo is going to be able to defeat him. He’s going to have to battle three people at once, including Ishida, and I still don’t know what Ishida is doing as a part of Juha’s team. Even though Ishida and Ichigo have had their differences ever since the start of the series, their relationship has grown a lot. At the end of the “Fullbring” story arc, I was certain those two considered each other as friends. Yes, Ishida is a born Quincy, and his family doesn’t like the Shinigami, but seeing those two working together made for one of the best interactions in the story. For me, the main team has always been Ichigo, Ishida, Orihime, Chad, Rukia, and Renji. Seeing as Orihime and Chad haven’t shown up yet, I don’t know how the conversation between Ichigo and Ishida is going to go once they meet each other for battle. Do I think Ishida has grown evil? No. He has served as the brains of the team more than once and I wouldn’t be surprised if he has a plan up his sleeve. He might fight Ichigo in the coming issues, but I think that even though he’s a Quincy, his loyalty lies with his friends and will definitely play a role in the final battle of the current arc.

What did you think of this week’s manga issue? Are you glad the rest of the good guys showed up? Do you think Ichigo will be able to stop Juha Bach? Where does Ishida’s loyalty lie? Feel free to share your thoughts in the comments section below!