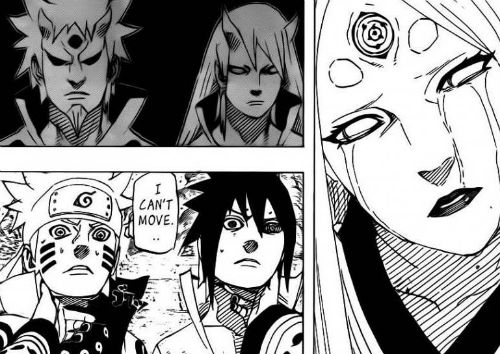 There was a lot of talking in this week’s manga issue of Naruto, which wasn’t a complete surprise. There have been a great deal of questions and Kishimoto tried to answer some of them this week, answers that some fans of the series might not like.

It was obvious that Sasuke’s attack wasn’t going to work against Kaguya. The ensuing explosion sent Naruto flying away and Sasuke fell towards boiling lava but he used his teleportation technique and appeared behind Naruto, stopping him from being thrown further. The two readied to battle Kaguya. The panel in which she appeared behind the two, her arms extended in a menacing fashion, was creepy. It looked as if she was going to break their necks but in the next panel we saw her hands caress their cheeks while they stood paralyzed. And then, shockingly, we saw her cry!

Yes, people, tears fell down her eyes as she remembered her sons. Does that mean Naruto and Sasuke aren’t Indra and Ashura, but reincarnations of the Sage and his brother? Some fans might not like seeing the main villain cry, but I thought it looked good. It made her seem human. Even though Kaguya is way too powerful, she is still a woman whose own sons sealed her away and hurt her. I think she loved her sons and created them through her will.

The origin of Black Zetsu was explained this week and Kishimoto showed that he wasn’t the useless character we all thought he was. Now, if only he could show something similar with regards to Sakura because she is in danger of going down as the most useless female lead character in history. It was revealed that Black Zetsu was created by Kaguya before she was sealed away in order to plan her return. Black Zetsu had been manipulating everyone from the start in order for the ultimate genjutsu to activate. Though Black Zetsu’s monologue explained a lot of things, it negated everything to do with finding one’s own destiny, a concept Naruto has been preaching since the start of the series. If Black Zetsu had been manipulating everything from the beginning, then all the major events such as the Chunin exams, the Akatsuki, etc., mean nothing. Does the concept of free will even exist in the Naruto’s world? Even now it seems Naruto and Sasuke working together to seal away Kaguya was pre-determined.

Leaving the philosophical aspect of the story aside, how Madara survived the battle with Hashirama was a standout moment. Madara used Izanagi to revive himself and was used by Black Zetsu to realize his plan of bringing Kaguya back. It seems weird to think that a powerful villain like Madara was being controlled by someone like Black Zetsu.

The issue ended with Naruto and Sasuke deciding to use a special technique. I would’ve liked to know a bit more about the said special technique. I’m certain the next chapter will show the new technique and will also have a great deal of dialogue. It’s been a while since we saw Naruto going on about his own ninja way and his determination to protect all his friends. I won’t mind a Talk-No-Jutsu chapter if it tells me a bit more about Kaguya and why the tailed beasts were a part of her.

What did you think of this week’s manga issue? Surprised to see Kaguya crying? How do you feel about Black Zetsu manipulating everything from the start? Please feel free to share your thoughts in the comments section below.