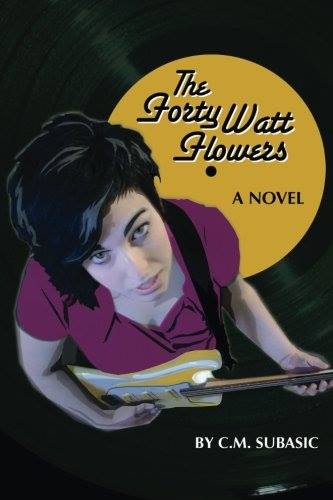 Today I have the author of “The Forty Watts Flowers” with me, Colleen M. Subasic. She is an award-winning editor, dramaturge, and playwright. Check out our exclusive interview with her.

I am a mid-wife of tales, helping novelists, screen writers and playwrights take their diamond-in-the-rough and polish it into a story to be proud of. I live in the “city of neighborhoods” Toronto, which is also known for our city jester, Rob Ford. I’m truly alive when I’m exploring my senses, from creating 7-course meals, creating visual art (I’m tres crappy at it, getting paint all over myself, but I’m smiling while doing it, so that’s enough for me), or enjoying arts in all their forms. For ‘real’ money, I sometimes need to write procedural or educational copy.

You have quite an impressive resume. What made you want to become a playwright?

I was attracted to theatre in high school because of its kinesthetic aspects. In Theatre Arts class you get to MOVE, which is way better than sitting at a desk looking at words. As an eager newbie (and because I can never do anything by half measures) at age 17 I attended a “para theatre” conference at a local university. There, I somehow befriended this British theatre troupe doing a version of Joyce’s Ulysses. Like a lovesick puppy, I followed them to Theatre Passe Muraille in downtown Toronto where they were doing a week-long run. Closing night I was standing around the party saying, I’d love to work here and was told I was hired. At the age of 18 I was attending school while also working front of house at Passe Muraille. This meant school from 9-3, theatre club rehearsals from 3:30 – 4:30, bus and subway downtown, clean toilets, take tickets and seat drunken late comers until 11pm, go out with the cast for a drink until 12, home for 1am and start all over again.

Theatre Passe Muraille was doing ground breaking theatre at the time, producing new works by Canadian writers. Working there, I was told that I didn’t have to be and old British man or dead to write a play.  I could write a play myself, and I could make it about the world around me. Who knew?!

At the time I was also standing in front of my record player, holding a copy of the B-52’s record in my arms, dancing and wondering, “Athens, GA? What kinda kooky place is that?”

Do you have any favorite plays you want to share?

Many, of course. I love Shakespeare, Ionesco, Edward Albee. Contemporary faves are mostly Canadian. Anything by Daniel McIvor, Morris Panych, David French, Michel Tremblay and Linda Griffiths. One of the first shows I watched as I stood at the back of that dirty, warehouse theatre was Linda performing Maggie & Pierre, a play about our famous prime minister, his wife and a reporter, all characters played by Linda. I saw that show at least 127 times. At one celebration, Linda gave me a button that said, “Nourishing Adventures.” I still have it and will take a photo to include.

How did the idea for “The Forty Watts Flowers” come into being?

My husband at the time got a post-doc in Athens, Georgia, so I followed him. At once anxious about living in a foreign country and intrigued to go to Athens, GA, where REM and the B-52s were from, we bought a car and drove down from Toronto.

I was a Canadian playwright in a place where the idea of being a Canadian playwright didn’t hold much sway. I had been a judge for the 3-day novel competition run by Anvil Press, and enjoyed the process of reading works from a substantive editorial perspective. So, I approached Hill Street Press, a small literary outfit that was publishing stories about the South, and began to review their slushpile. At the same time, I was getting to know the very active music scene, and in reading these scripts realized there was an absence: a story about a band in Athens, GA. So I started to write it. By the time I finished, Hill Street no longer was publishing fiction, so I moved on.

I’m a fan of layered and complex female characters. Tell me about the main character Trisha.

Trisha is the reliable daughter. The smart girl with bushy hair who has more in common with the geeks than she does her girl peers. Trisha wants to tap that spark that makes her special and show the results to the world, but it isn’t working out very well. A screenplay she’s spent six months on is such a mess, her best friend who promised to produce it has come to Athens to tell her she’s selected another script to produce. Trisha is crushed.

But that’s not her only problem. You see, two years ago, when driving her sister to a party, there was an accident. Molly, her sister, went into a coma and then died. Her mother blames Trisha for the death. Trisha leaves Rochester, Minnesota, heading back to Savannah where she was attending university, only to discover that the money put aside for her education isn’t there anymore. Apparently, it went to medical fees for Molly. She becomes so frustrated she cuts off all contact with her parents and brother, and begins to repeat the mantra, for all tense porpoises, I’m an orphan. Her challenge is to come to terms with her sisters’ death, her mother’s challenged mental state, and the increasingly worsening depressive brooding of her boyfriend.

She’s an audiophile, who worked throughout high school at a used record store and has a sizeable LP collection. It’s this knowledge she taps when an anxious band playing their first gig at the bar where she works asks for her advice. She blows them away and they ask what band she’s in. When she confesses that she doesn’t have one the singer says, “Wow, you really should man. You’ve got great ideas.” Thus the seed is planted and her journey begun.

Going through your work I see it links a lot to music. What kind of ‘target audience’ do you expect for “The Forty Watts Flowers”?

If you love indie music and reading, this book is for you. Followers of Nick Hornby, Roddy Doyle or Caitlin Moran (How to Build a Girl) should take a gander. As the story explores the challenge of being an artist, and listening to your own wisdom, anyone interested in the creative process should pick up a copy, especially young women interested in finding their power.

The ‘Fictional Tour’ promotion strategy is very interesting. How did you think of that?

The power of story is a key theme of the book, how a good story can turn nothing into something real. The band rehearses down the street from The Tree That Owns Itself, an Athens tourist attraction that itself is a testament to the power of stories. This tree came about because back in the twenties (or some time) a law professor at UGA gave his students a case study: Can an inanimate object be given rights, such as ownership. The prof made up a story that the man who some property bequeathed a tree ownership of the land 7 feet in all directions. The class exercise was written up in the local paper, but left out was that fact that it was not fact. Years later, when the story was re-discovered, locals found the money to build a chain around the tree, as well as a marker. To this day, this tree stands, interrupting the flow of traffic, despite the fact that it’s only a story.

Two years ago, as I was working through the final edits of the book I started Tweeting as the band. I saw it as an exploration of both Twitter (which I wanted to know more about, as a medium) and another way of looking at the characters.

When we were shooting the book trailer, the ‘band’ started joking about going on a virtual tour of closed venues. I thought it would be a great way to connect with people on an indie level while promoting to each locale one at a time, rather than the entire continent in one go.

What is the tour? At its essence it’s a blog, but it’s what is written about that’s important. In each town the band “visits” I connect with a local indie band (which I define as, playing local venues regularly, max one LP out, good music). I write a ‘review’ of their music, which they can use in any ways they want. All I ask is that they tweet/facebook and share the review. The bands love it, because they can use what I write in their other promotions.

As a promotional strategy, however, it’s not proving as useful as first thought. Each entry is like a short story, making it quite time consuming to write, edit, and develop in any other way. The bands aren’t always reliable (no huge surprise there). Also, it is not yet gathering much of an audience. What I am discovering is that everyone is out there tooting their horn, but very few people are actually listening to others. This is going to be the theme of the next entry, how we as a culture are more interested in yelling about ourselves and have forgotten how to listen, to our hearts, to each other, or the earth beneath our feet. We are disconnecting ourselves from each other.

I’ll keep it up, but at a relaxed pace and for the joy of doing it, but also in the hope that it is “discovered” in the future.

Any up-coming works you want to talk about?

The How Novel tour continues, but at a leisurely pace. I have a number of projects in mind including a book about older women in a band (The Faculty Wives), a play about Edward Snowden and Marshall McLuhan meeting in the Moscow airport, a children’s story about the Canadian electoral system, and/or a play about a wife who is having virtual affair with her husband. These ideas are currently battling for my attention. Who knows what will pop up.

You can get to know more about C. M. Subasic, her work, and the fictional tour by visiting her website. People who like to read about characters that love music will surely enjoy her book.

Have you read “The Forty Watt Flowers”? What did you think of it? Let us know!