Look for the Helpers in “Depart, Depart!” – Book Review 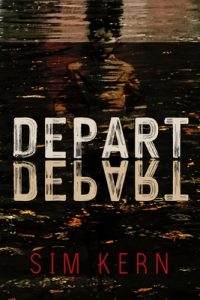 Depart, Depart! doesn’t need sudden scares or monsters to be terrifying. All it needs is to describe an all-too-possible future.

I was provided with an ARC of Depart, Depart! in exchange for fair review. All opinions are my own.

For many people who aren’t cisgender, everyday tasks, trips, and interactions come with the possibility of trouble. It’s a kind of background peril – wondering who to come out to, whether it’s possible to pass, which stranger in the grocery store is staring, who has noticed. Over time, these become ordinary dangers. In Depart, Depart!, non-binary author Sim Kern asks, “What would these ordinary dangers look like in a world that’s broken?”

It’s a question that feels close to home in 2020. On Goodreads, the blurb describes Depart, Depart! as “a story for these uncertain times” and it’s not wrong. The novella’s apocalyptic trigger is climate change rather than a pandemic, but reading this story in a time of upheaval still made for an intense experience. Kern narrates the story of Noah, a trans boy displaced from his city by a flood and forced to move into a huge sports arena that serves as a makeshift home for refugees.

The novella centers the trans experience and trans issues through Noah’s struggles and victories. Details of his life in the arena are handled with respect and empathy as he seeks a way to shower privately, to bind his chest safely, and to sleep among people he can trust. The story stays on the surface through these first passages, narrating Noah’s tentative attempts to find security.

There are a few incidents towards the beginning of the novella that recall the “look for the helpers” maxim of Mr Rogers. It’s heart-warming to read as Noah forms friendships with a few other queer people, and they start to organize a school for the children living in the arena. They’re helped by a group of Black teenagers who accept Noah as a boy without comment. These characters feel a little pencil-sketched, but it keeps the focus on Noah himself.

The story comes back down to Earth with the characters of a particularly hostile cop who attacks Noah and a would-be shooter who isn’t incarcerated despite having threatened Noah’s queer friend-group with a gun. The descriptions of these events are frightening, with Noah’s helplessness palpable through the page. In broad brush strokes, Kern makes points about race, queerness, and interacting with cops.

The novella truly begins to soar when Kern digs deeper, using situations and dialogue to ask questions without giving any immediate answers. It’s in the character of Abe, the ghost who follows Noah and helps him to escape danger, that we find the true beating heart of Depart, Depart!. The questions raised by his presence are ones that will feel familiar to a reader who isn’t cisgender: how can you connect with your family, when their values may be very different to yours? How can you reckon with their judgement, and how helpful is their “help”? The answers come to Noah slowly and are hard-won, and are all the more powerful for it.

The ghost of Abe is a powerful representation of Noah’s connection to his Jewish heritage and identity. The scenes with Noah exploring what it means to him to be Jewish are the most nuanced, heartfelt, and powerful in the novella – when Noah is overjoyed to find evidence of a Jewish spiritual framework for transness, and then that happiness is undercut by wondering why he needs validation from “clinging to scraps”, it hit home. The bittersweet rush of discovering evidence of belonging in the complicated and hostile past is captured so well. Noah’s thoughts and insight here feel intricate and profound.

The build-up to the end of the story is well-paced, and so the climax is powerful and touching. It feels like a gift to read a scene where a trans character gets to meet his family who’ve passed away, and they offer him love. It soothed a little of the hurt in me that’s there for so many people who aren’t cisgender.

Noah’s arc (no pun intended) throughout the book is satisfying and feels earned. Even in the relatively short span of a novella, Kern gives us a character who learns about himself – what or who he wants to take with him when he runs away, and how he wants to live through things, and who he wants to be. Noah has flaws and the courage to do battle with them.

Depart, Depart! is ultimately a story of hope. It’s a steadying hand on the shoulder of trans readers, particularly those struggling to feel safe and loved, and particularly those who feel that different parts of themselves can never be reconciled.

You can find more book talk, with reviews and recommendations, here at The Geekiary.

Previous:Netflix Will Stream Hannibal and We’re Here to #SaveHannibal Again
Next: Disney to the Karens: Wear a Mask Or Stay Home