Cells at Work – Sympathy for Cancer? Probably Not 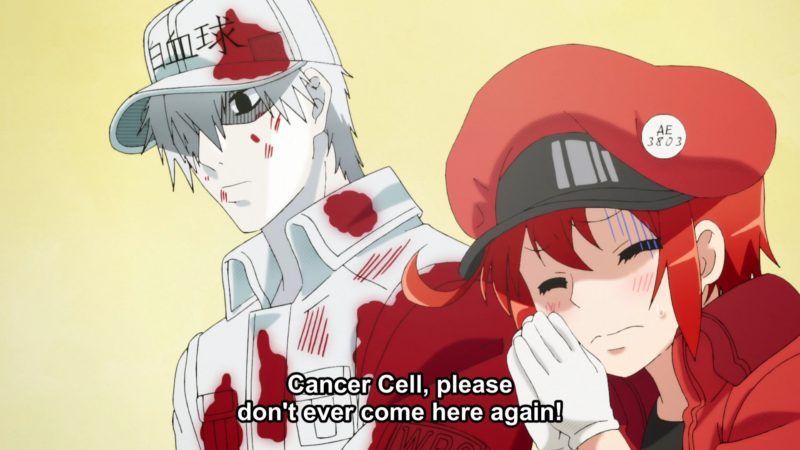 Cells at Work is an anime that personifies the cells in the human body. It’s actually a concept that works quite well in anime form and is very enjoyable to watch. The last two episodes were specifically about cancer cells. Part two especially received mixed reviews from blogs and fans on social media alike. With cancer being such a delicate subject (most people have been affected by cancer in their lives or know someone who has), it’s no surprise that the episode was met with mixed results.

I want to start by getting a little personal so people know where I’m coming from. I am at-risk for cancer and I have also lost people close to me to cancer. I hope I am able to treat this topic with the sensitivity and care it deserves.

A number of people were surprised at how the cancer cell was written in the episode. He was portrayed as someone who was born into the world just to be treated horribly by immunity cells and destined to die. He questioned why this had to be when he was a cell just like all the others, but because he was born as defective due to someone else’s mistake, he wasn’t allowed to live. He questioned why he was even born at all. White Blood Cell, who ultimately killed the cancer cell, said that he couldn’t save the cancer cell nor could anyone fix him. They couldn’t let him live because he would cause destruction to the body.

I was surprised at this take on cancer myself while watching the episode. Did the writer expect us to feel sympathy for cancer? And if so, why? In fact, this portrayal turned some people off of the show completely. After giving it some thought, reading others’ responses, and chatting with some fans on social media, I began to see it a little differently. Cancer is a tragedy. And since the cells are all personified in this universe, I feel that the writer probably felt like there needed to be a tragic backstory of sorts. The fact that cancer happens at all is a tragic and awful thing. (Did you know that cancer cells are produced even in healthy bodies every day? I didn’t!) 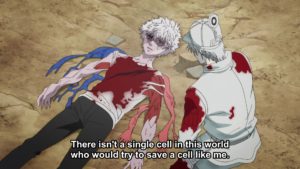 I don’t think we’re meant to feel bad for the cancer cell or feel sympathy for him in any way. But rather we’re supposed to feel unnerved by the situation that allows for cancer to exist. I think Cells at Work did an interesting spin on this. The writer could have tackled cancer just like all of the viruses and bacteria that have been introduced in the show so far. Instead, they chose to approach the subject in a way that makes us all think a little more or maybe a little differently than we would have otherwise. But, certainly not with sympathy for cancer.

If you haven’t checked out Cells at Work, I definitely recommend it. I’ve learned a lot about how the body works and how our cells respond to the various viruses, bacteria, allergies, and other conditions our bodies go through in a way that doesn’t feel like learning at all. And from talking to people in the medical field about the show, it’s fairly accurate in its portrayal too! Cells at Work can be seen on Saturdays on Crunchyroll.