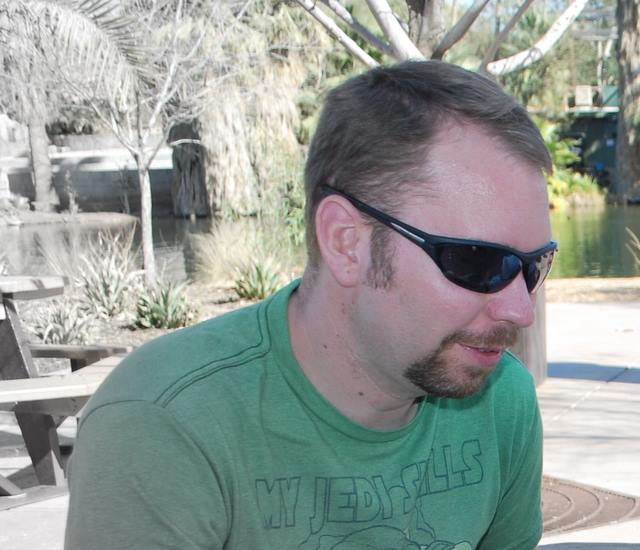 Today I have author Daniel Ausema with me. I enjoyed learning more about him and his unique take on telling stories in a ‘serialized’ manner. Check out our exclusive interview with the author where we talk about what it means to publish serialized works and more!

For the past decade I’ve been a stay-at-home dad. Already before then, I’d written a couple of novel manuscripts and had some poems and short stories published, but that was when I began taking the craft of writing more seriously, paying more attention to the kind of stories that were out there and the kind of discussions people were having about those stories. So, since then I’ve had dozens of stories and poems published in a wide range of magazines and anthologies.

When I’m not ferrying my older two kids to and from school, I can most often be seen running on local bike trails, pushing my youngest in a bright yellow jogging stroller.

When did you realize you wanted to become a writer?

I don’t know that there was one particular moment, but I’d say it definitely goes back to the stories my brothers and I used to create together and act out in our basement. When I was quite young, I remember a space story about a humanoid crab named Crab who always carried a knife in one claw. (Why not use the claw for a weapon? I don’t know…) And an exploration story about Clewis and Lark. (Clever…) and a Star Wars/Lord of the Rings imitation/mashup (though my older brother was the only one at the time familiar with either). Later my older brothers lost interest, and my younger brother and I took much more control over making up the stories. We pushed each other to come up with ever-cooler scenarios.

Share a bit about your journey as an author, a poet, and a freelance writer. You also worked in education?

I took a minor in journalism in college (my college had no journalism major at the time), because it seemed like a more reliable writing-related career than focusing exclusively on creative writing. I found that I really enjoyed writing articles—there’s something puzzle-like about fitting all the bits and pieces together, the pertinent information, the telling quotes, the revealing examples. I was also taking a lot of literature classes for my Spanish and English majors. So, regardless of the focus, I was writing and reading a lot, in all sorts of modes.

After college, I did a variety of freelance writing and translation work, but it was a struggle cobbling together enough things where I was living at the time. I’d avoided an education degree, but I’d worked every summer at a summer camp and led some experiential education things—nature classes, team-building sessions, and the like—through the school year as well. So, I gravitated to other educational work as I found it, increasingly focusing on working with an interesting combination of high school athletic teams and at-risk teens. So, that’s what I did until becoming a stay-at-home dad.

The poetry has always been there, alongside everything else, ever since I took a creative writing class in high school. I’d hoped to write short stories or even a novel at the time, and was initially disappointed with how much we were going to focus on poems. But by the end of the semester, I’d caught the poem-writing bug. I go through spurts now, sometimes writing no poems for months at a time, and sometimes writing many.

Tell us about your inspirations as a writer.

I’m very influenced by my physical surroundings. Today I live at the foot of the Rocky Mountains, and I love to see how they rise, practically from my backyard. I love to be out there hiking and exploring. I’m also insatiably curious, so every tidbit I learn can turn around and find its way into a story or poem. I love finding out new facts about the world around me, and learning to see those things from the eyes of other people. So, there’s endless fascination that I just want to take in…and then turn around and add my own take on those things. Because most of all, it’s the process of creating something that I love, of taking words and weaving them together to create something new.

What can you tell us about ‘Spire City’? What kind of readers will it appeal to? 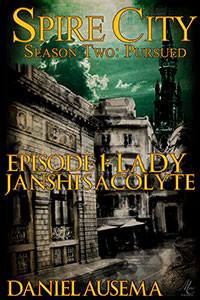 All kinds of readers, naturally! OK, that may not be the most helpful answer. I do think it should have pretty broad appeal. Some of my shorter works tend toward the cerebral and experimental, but with this I think I managed a good balance that is accessible without sacrificing lyricism or depth.

More specifically, it’s a work of secondary-world fantasy, so most fans of fantasy should feel at home here, especially those readers who enjoy fantasy but are ready to move beyond swords and elves and try something new. And on the flip side, for those who shy away from fantasy because of the medieval trappings and the magic, this is a great way to experience that other-world feel of wonder and strangeness but with little magic (apart from some mad science) and an industrial-era, steampunk setting.

And of course, it’s steampunk, which has its own vibrant community. Spire City is perfect for those who are willing to read steampunk that isn’t set in Victorian London/Paris/New York but explores its steampunk trappings in a city of carriage-pulling beetles and mad science. There is also a definite New Weird vibe to many aspects of the story. So, fans of China Mieville and Steph Swainston and Jeff VanderMeer’s Ambergris books will find much to enjoy here.

This is the overview of the series: Spire City is home to mighty machines of steam power and clockwork, and giant beetles pull picturesque carriages over cobbled streets, but there is a darker secret behind these wonders. A deadly infection, created by a mad scientist, is spreading through the city, targeting the poor and powerless, turning them slowly into animals. A group of those infected by the serum join together to survive, to trick the wealthy out of their money, and to fight back.

It is a serial fiction project. Each season is roughly the equivalent of one book in length. Season One: Infected ran from November 2013 to August 2014, with a new short-story-length episode every three weeks, thirteen episodes in all. Those episodes are now collected in two bundles, Contagion and Epidemic. Season Two: Pursued just began serialization on November 28, 2014 and will again run for thirteen episodes. And Season Three: Unwoven is the final season, which will begin a year from now.

How did this serial fiction project come to be? What is it like to write serialized works?

The short version is that a publisher made a comment about a different novel I’d submitted, saying that she felt like she was opening a Dickens-style serial each time she moved to a new chapter file. That publisher folded before the novel could be published, but her comment made me want to write something specifically to be serialized. And the Dickens reference made me think right away of steampunk and orphans and dirty factories.

Writing it, well, there are certainly many ways to approach serialization. Some people take a novel and just chop it up along the chapter breaks…which can work, but sometimes feels unsatisfying. I love what Michael Chabon did in Gentlemen of the Road, which has each episode really ramping up the overall story, ending in a cliffhanger. But would I have loved that if I were reading it as it was serialized, instead of after it was published in book form? I’m not sure. I took my inspiration from how television shows handle their episodes. So, each episode is self-contained, tells its own story, but builds toward the overall season-long and series-long arcs.

It has been more difficult for me. I can easily find any number of book reviewing blogs and book discussion forums and the like. There are some short fiction reviewing sites (though not as many as I’d like to see). But I haven’t found any that review serialized stories. Some will consider, say, the book-length collection of episodes once they’re all out, but even there I’ve met with some hesitation to take it on, because it’s not quite what the reviewers are used to reviewing. And then where do you ask readers to post Amazon and B&N reviews? On the individual episodes? On the bundles at the end? So, I’ve done a lot of blog swapping with other writers and made some great writer friends that way, but there are always so many good books out there clamoring for attention. It can be difficult to get noticed.

Any advice for indie authors who are just starting?

Read a lot and widely. But read, how to say it? Read with an openness. I run into a lot of beginning writers who are so caught up in learning the rules of writing and what works for them that they read only to critique the word choice or writing style and lose the ability to enjoy what they read. There’s a definite place for higher level critique, but at the beginning you need to read recognizing that there is probably a reason for the choices a writer made and try to understand why and what affect it has rather than just dismiss it as wrong. When you can do that, then you can move on to an actual substantive critique (if you wish to). 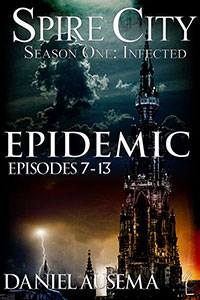 And write a lot…and widely. Don’t get caught up in narrowly defining the box you’ll write in. Just take whatever ideas and opportunities come. Try something new whenever you feel like you’re losing steam. Take a break from your ten-book epic and write a 100-word drabble or a haiku. If you’re a short story writer and novels intimidate you, dip your toe toward novel writing by writing serial installments. Finish what you write and give yourself time to think about how it went, what works, what you can learn for the next project.

Spire City is the main one for the next couple of years. I’ve also written a novella set in Musa Publishing’s shared world The Darkside Codex, which is also a steampunk fantasy world with a lot of similarities to Spire City. That was published a year ago, but I expect to see a lot more activity on that front in the year ahead, even possibly including further stories that I write. I have other, non-steampunk (!) manuscripts that I’m shopping around to agents, but nothing definite yet.

You can know more about Daniel Ausema by visiting his blog and following him on Twitter.

Check out Spire City on Amazon!

Have you read works by Daniel Ausema yet? Let us know!