What’s Your Sign? A Review of “Zodiac” by Romina Russell 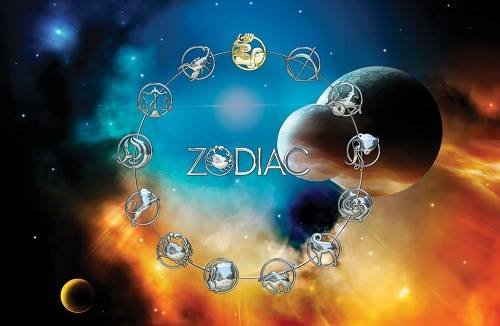 It’s a commonly reoccurring theme in young adult literature — a teenaged girl discovers she is somehow special and must embark on a harrowing journey to save the known world. In the case of Rhoma Grace, the heroine in Romina Russell’s action-packed new book Zodiac (available today from Razorbill), it is up to her — and the requisite gaggle of companions — to essentially save the entire universe. Zodiac attracted me because I will always be the girl who watched one of the Star Wars movies every day for a week, and I am forever searching for YA novels that take place in space. The premise is intriguing, the universe is interesting, but I found it to be more style than substance.

Rhoma — or Rho, as she is called — and her bandmates are some of the only survivors of a brutal attack on one of their planet’s moons, an attack that Rho saw coming but was convinced was not real. Rho, the newly-named Guardian of the planet Cancer, and her advisor, Mathias, travel from planet to planet, attempting to warn the other systems while at the same time avoiding attacks from an unknown and extremely hostile entity.

If the world of Zodiac looks slightly familiar, it’s probably because you’ve already seen it before in various incarnations. Zodiac takes place in a galaxy with twelve planets, much like the twelve districts of The Hunger Games’ Panem. Each planet is named after the one of the signs of the zodiac. Each planet is focused on one core trait, similar to the varying factions in Divergent. Each planet operates largely independently with a central government. Oh, and a rogue thirteenth civilization that is largely believed to be myth is coming to destroy everything. 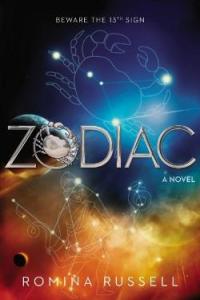 All of this would be fine — books borrow from each other all the time, shared elements are everywhere in literature — except that Russell does not spend all that much time exploring the world of Zodiac. It’s not well-written enough to pull off imitating other series because it doesn’t really provide enough of itself for balance. The readers are plunged into the mystery almost immediately, without much knowledge about the characters or the civilization. The individual planets are detailed fairly well, but you only see three of them. I wanted to know more about the government, the history, the overall culture, how they interact and coexist under normal circumstances. Zodiac is pretty much all action.

There is so much action in Zodiac that is gets in the way of other things — like character development. We don’t learn much about the three main characters — Rho, Mathias, and Libran ambassador Hysan Dax — other than what’s on the surface. (Rho is special, but why?) We learn even less about the supporting characters, who seem to exist only to further the plot rather than enrich it. The traits of the various astrological signs are used in place of actual development. A lot of characters appear only briefly, yet we are expected to develop a connection with them, enough so that we should be concerned about their fates. Reunions that should be heartfelt, news that should be devastating, everything is lessened for the simple matter that you don’t know why it’s supposed to be a big deal.

The obligatory love triangle between our three protagonists is less than organic and seems to develop only because Russell thinks it should be there. We don’t know enough about Mathias or Hysan to understand why Rho is so torn between the two of them. They can both be charming, but the whole thing reeks of the common trope of insta-love, so I didn’t particularly care who she ended up with.

The series has a lot of potential, and despite the fact that it seems like I didn’t have anything positive to say I will most likely continue on, because now I just want to know what happens (Something is going to happen with Rho’s mother, I can just tell!). My main issue with Zodiac is that I feel that Russell tried to cram too much into it. Zodiac should have been more of introduction to the world than it was. There is too much going on to really follow anything. It isn’t confusing, but there is so much information that I occasionally lost the thread. There is also a lot of emphasis on things that may be important later, but we don’t know how yet, so they kind of just hang out there.

If you’re interested in science fiction or fantasy, you would probably really enjoy this story. But I recommend that you check out the series’ official website before you read Zodiac. The site gives a little more background information, leaving you to focus more on the plot than I was able to.

Previous:Supernatural 10×09 Review: The Things We Left Behind
Next: Thor #3 Review: When the Ice Lords Make War