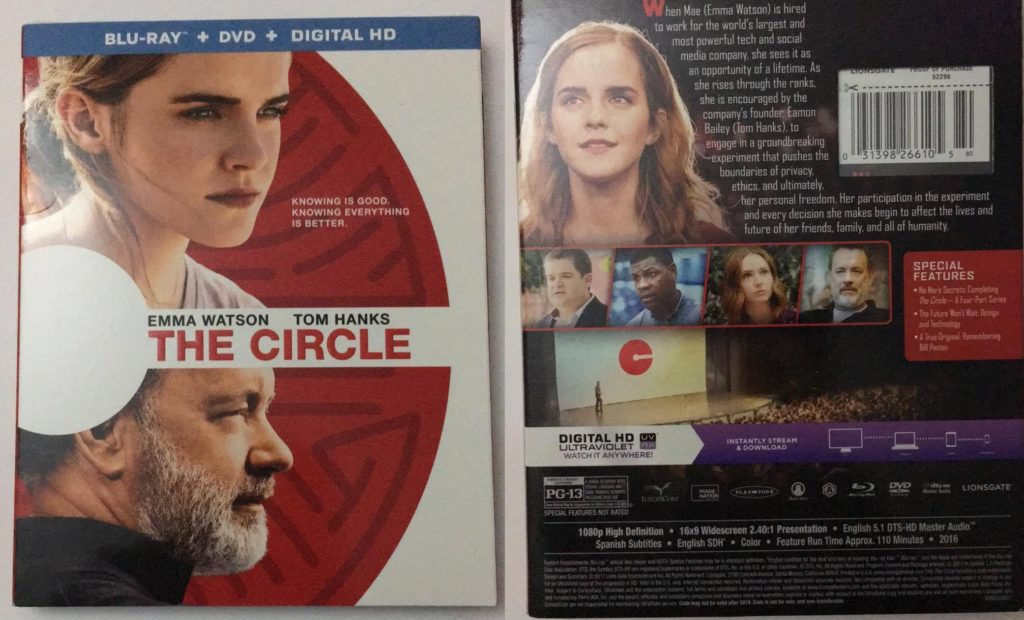 Emma Watson stars as Mae Holland alongside Tom Hanks in the interesting techno-thriller The Circle which will leave you wanting more.

I was provided a review copy of The Circle by Lionsgate Home Entertainment. The opinions are my own.

One of the best things about The Circle is its premise. With an increase in the use of social media and other kinds of technology, the lines between what should be public or private have started to blur. The Circle tells a story that can very well become true in the near future.

Even though this film (based on a Dave Eggers novel) has Tom Hanks, the late Glenne Headly, and Bill Paxton, it is an Emma Watson movie. We follow her character Mae Holland as she is introduced to a whole different world in The Circle, an organization that wants to make everything transparent. The plot does have some very intriguing things to say about the future of social media and internet usage. You’ll probably end up agreeing with Eamon Bailey (Tom Hanks) when he talks about what he wants to accomplish.

Eamon’s ideas of keeping an eye on politicians, tracking children so they don’t get kidnapped, etc. do make sense but there’s always a feeling that while they might sound good on paper, applying it to the real world could lead to numerous problems. We already have things like surveillance cameras, tracking systems, and facial recognition software to deal with potential threats, but Eamon is determined to take them much further. To him, the concept of personal space is temporary. Tom Hanks is awesome as Eamon and I could listen to him giving speeches about The Circle’s latest technology for hours.

Emma Watson does most of the heavy lifting as Mae. One of the things I liked about her was that she wasn’t tangled in a romantic subplot. There is no romance in The Circle and I appreciated that. This allowed Mae to be her own person instead of being defined by a love interest. Of course, there are hints about her childhood friend having feelings for her but they aren’t necessarily the focus of the story. John Boyega’s Ty Lafitte can also be considered a potential love interest for Mae but again, the film doesn’t focus on it.

I was surprised to see Mae agreeing with how The Circle operated. At first, I thought she was playing along because she wanted to help Ty expose it. But her loyalty to The Circle was revealed to be genuine. She even accepted to continuously share her life with the entire world. In a sense, there is no traditional hero in this film. I was expecting her to work with Ty to bring down the organization after the terrible incident involving her friend but that didn’t happen. While she did expose what Eamon and Tom Stenton (Patton Oswalt) were up to, for Mae, being public all the time was the future. So, the end was surprising for me. I liked it because it felt different, but it still left me wanting more.

The Circle felt more like an opinion piece about social media usage and the internet rather than an actual film. It has some awesome ideas I wish were developed further. There was so much content related to our modern society but unfortunately, a lot of it was just mentioned in passing.

Coming to The Circle Blu-ray Combo Pack, it includes a Blu-ray disk, a DVD, and a Digital HD copy. Courtesy of Lionsgate Films, the Blu-ray features an AVC encoded 1080p transfer in 2.40:1. The overall sharpness and detail were a joy to see. The film is very bright and I really liked the video quality. Even during the darker scenes, there are colorful lights and sharp character images to make everything look appealing. The scene where Ty brings Mae to a dark underground chamber is an example of how clear the visuals can be.

The DTS-HD Master Audio 5.1 track is clear and allows for better immersion in the film. While there isn’t an amazing soundtrack to listen to, the audio does a great job of making each dialogue sound clean.

There are also a couple of special features for you to enjoy.

Some DVD and Blu-ray specifics

With a runtime of around an hour and forty minutes, I enjoyed watching The Circle. Even though I think Tom Hanks wasn’t used as much as I would have liked, Emma Watson makes for an interesting lead. Furthermore, while the film will leave you wanting more, the sharp Blu-ray video quality and other technical merits definitely work in the film’s favor.

Have you watched The Circle yet? Will you be picking up the Blu-ray Combo Pack? Let us know.