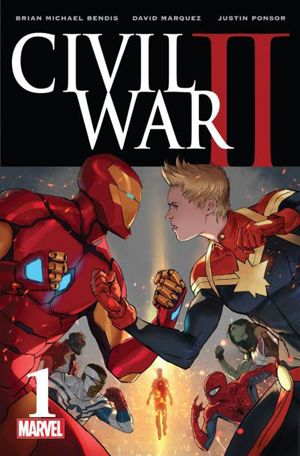 Marvel’s latest comic book crossover event of the year, Civil War II, is right around the corner and the company is promoting it big time. They have released a trailer for the event along with solicitation texts that hint towards two major character deaths!

Civil War II will be released in June and it is being written by Brian Michael Bendis with David Marquez and Justin Ponsor handling the art. The premise revolves around the idea of freewill and the ethics involved in trying to change the future. The main series will run for seven issues and will be accompanied by numerous tie-ins. Ms. Marvel and New Avengers will be part of the event for two issues each. The X-Men will be included in the event as well, but in a separate four-issue miniseries instead of their main titles serving as tie-ins. A separate miniseries makes sense because the X-Men will still be experiencing the Apocalypse Wars when Civil War II rolls out in a couple of months.

A trailer has been released for Civil War II and it is clear that the superheroes will once again be forced to stand against each other. This time around the war of ideologies will occur between Iron Man and Captain Marvel. The conflict is due to an Inhuman who has the ability to predict the future.

One of the most interesting things for me in the trailer was Kamala Khan ripping a picture of Captain Marvel. Carol Danvers is idolized by Kamala and I can’t wait to know why Ms. Marvel decided to do such a thing.

Civil War II is also teasing two major character deaths (until they come back after a year or two if not sooner. These are comic books stories after all). There are rumors that She-Hulk and War Machine will die and their deaths will trigger the dispute between Iron Man and Captain Marvel. The released solicitation text does point towards these rumors being true.

Are you excited for Civil War II? Do you think She-Hulk and War Machine will die? Let us know!