Comic-Con: The Nobody’s Damsel Panel Speaks to the Feminist Fangirl Within 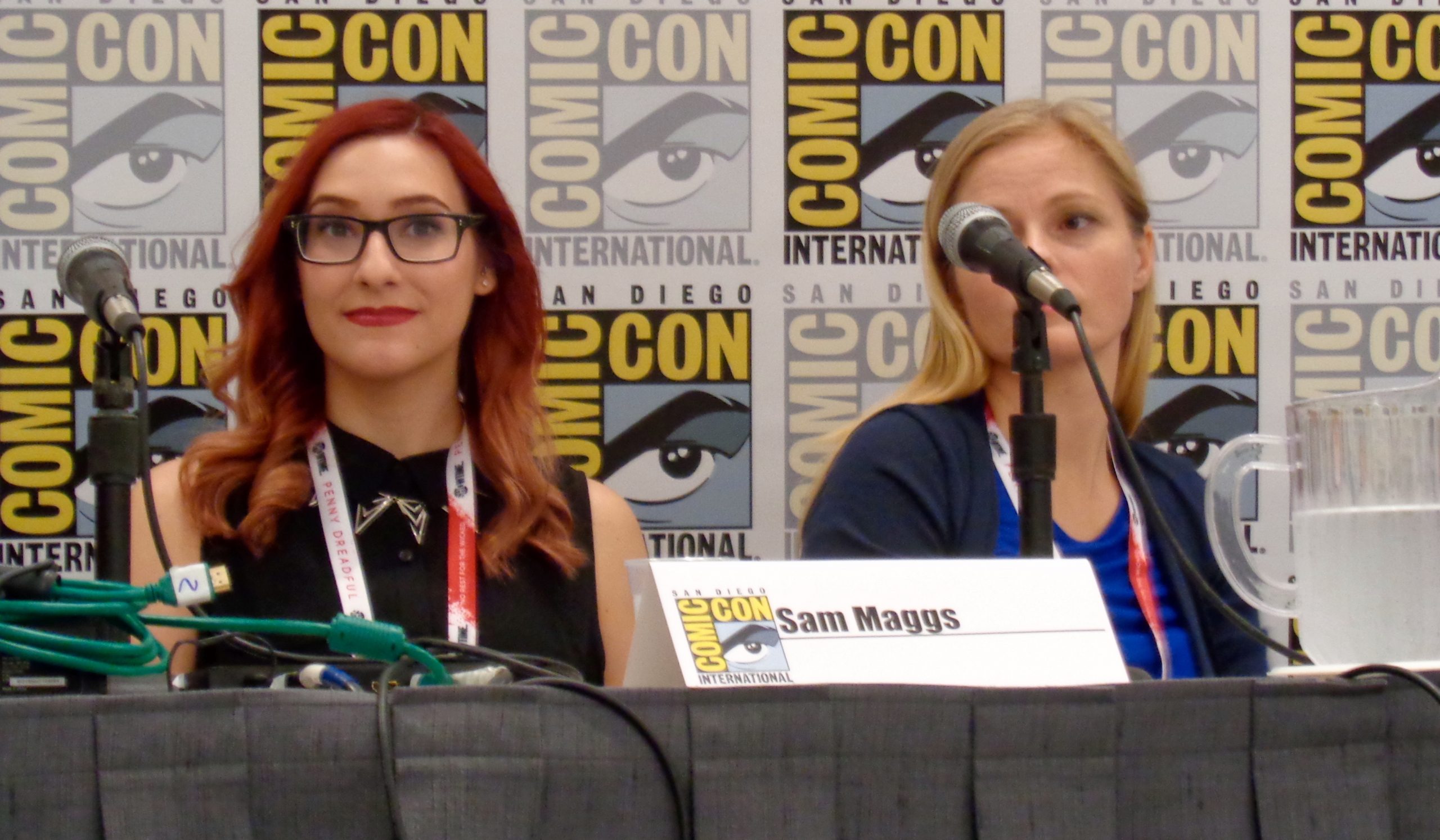 It’s probably news to any regular Geekiary readers that we’re kind of very interested in female characters, so when I heard that there was a panel at SDCC this year titled: “Nobody’s Damsel: Writing Tomorrow’s Women” I put it at the top of my to-do list. SDCC is pretty hectic but I made the effort to see this panel, and I am incredibly glad I did, because while the panelists didn’t discuss anything particularly groundbreaking, it was still nice to hear that some people understand and are actively trying to change the obvious problems with the representation of women (and other minorities) in popular media. 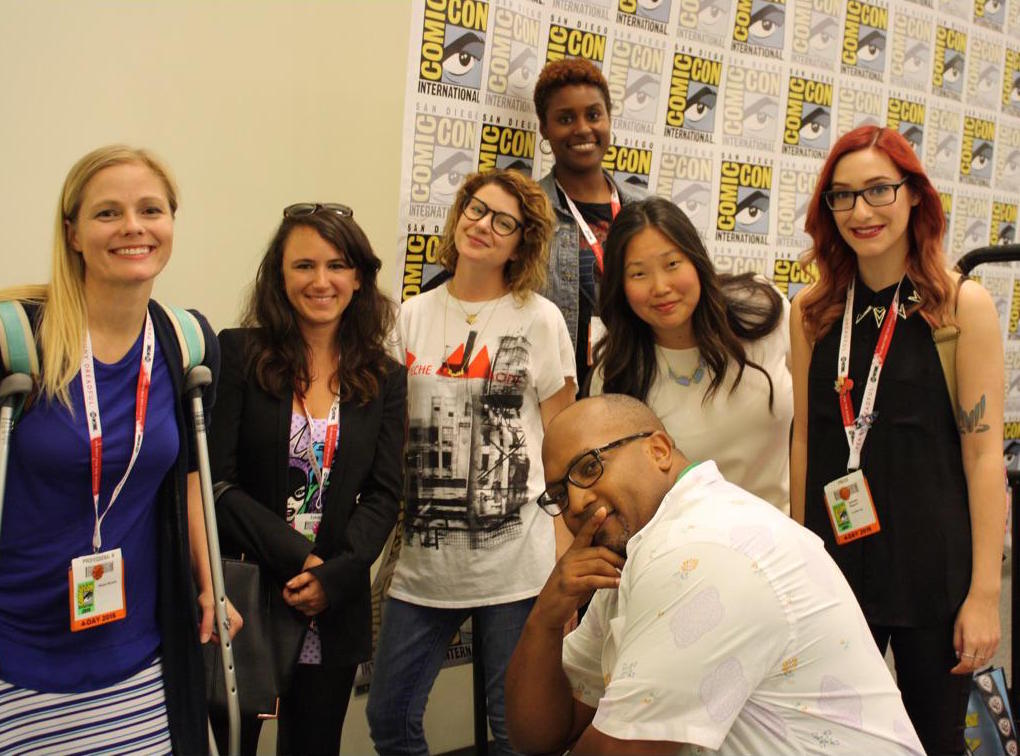 Pretty awesome line-up right? That’s what I thought. I even got to shake Sam Magg’s hand, which was a massive fangirl moment for me. But the best part was actually listening to this group of mostly women talking about how far female characters have come while also recognizing how much work there still needs to be done.

The first topic on the agenda was – developing modern female characters and content. Moderator D’nae Kingsley noted that “there are more representations of strong female characters than ever before” and threw the question of why and how that happened to the panel. It took about two sentences for Buffy to be brought up. While I love that Buffy is now recognized as a significant shift in the depiction of female characters, particularly female action heroes, it’s a little disappointing that people are still looking back 20 years to find that kind of recognizable female character. Buffy did cause a shift in the way that female characters were written, but there have been further shifts since then, at least I hope there have because if we’ve been stagnate for the last 15 years I might cry.

Sam Maggs had a more interesting take on the shift, recognizing the role the Internet had to play in the shift towards more dynamic female characters. The Internet allowed us (women) to form our own communities and it also allows us to speak directly to the people that are making these things.

“We can go straight to Marvel and DC and say: why aren’t you making more comics for us? We’re here, our daughters are here.” – Sam Maggs

From there things got a little more interesting when D’nae asked: What do women want? And I just have to mention how depressing it is that we still have to ask this question because the responses it received should be common sense, and it sucks so hard that they aren’t.

What women want is pretty simple really: they want to see themselves represented on the screen. They want to see, as Issa Rae said: “Balanced, flawed characters”. That second word is the key, and it’s also what is most often missing from female characters: flaws. If the women do have flaws, they are usually, as Issa Rae said, “male-approved” flaws, but those are not real flaws. They are not recognizable flaws. They are flaws that often fall into stereotypes, like she’s so crazy or messy so that her male co-star can love her in spite of that one often incredibly silly “male-approved” flaw.

At the moment, the problem is that ALL women are being represented by ONE female character and because that SINGLE female character represents all the women on the planet they have to make sure she’s perfect. As a result, no one can relate to her. Of course there’s a simple solution to this problem: the more female characters there are, the more opportunity there is to show their flaws. But that is easier said than done because while there has been a significant shift in recent years, there is still a long way to go before a large number of female characters will be accepted as the default.

That seemed to be the consensus of the panel; the only way to achieve true diversity is to make a diverse world the default. Which is something that is already happening in children’s media, although it is often dismissed as pandering. It’s not pandering to include a diverse range of characters; it’s realistic.

“The biggest thing is familiarity,” explained Dan Evans. If you know someone, then they are no longer and outsider. Evans insists that the entertainment industry is full of great people that just want to make great things but they write what they know and they just don’t ‘know’ about diverse characters. When they do write diverse characters it often turns out horribly or stereotypically. Then everyone reacts badly and so they go back to writing that they know. Evans finishes by saying that there needs to be change where people are willing to take the leap, even if it doesn’t work out.

Issa Rae points out a very obvious solution to the problem of those in the industry that do not ‘know’ how to write diverse characters, hire people that do. It’s certainly a lot easier to get the perspective of a women or a POC or any other point of view besides that of a straight white male if you have them on your staff.

“Trust people to tell their own stories” – Issa Rae

It was then pointed out that the lack of diversity in on the creative teams of the media we consume is not only a disservice to the characters but also the audience. As Sam Maggs points out, half the people consuming this media are women, more than half the population are women, yet only a small percentage of those creating media are women. The simple fact is that the people making this content are not representative of their audience and most of the problems they have with writing diverse characters could be solved if they just asked someone.

“Who put Spiderwoman’s butt on a cover like that? A bunch of dudes did and they didn’t ask anybody about it.” – Sam Maggs

The conversation veered from what the problem is to specific ways creators – the ones that are already in the position to make change – can go about fixing things. Molly McAleer’s response, while not nearly strong enough in my opinion, did help to remind that it doesn’t take much to do something significant. She suggested that if you get the change to do ONE LITTLE thing different, with ONE character then that’s how change begins – as long as you don’t rest on your achievements after that one little thing. If everyone just kept adding one little thing, one more character, one new storyline, one throw away line then eventually those little things will add up to something big.

After that, things got a little more serious and also surprisingly uplifting as the panel began to talk about the impact of feminism on the media right now. Listening to the discussion I couldn’t help but wonder what the response to this topic would have been even last year because feminism has been a dirty word for A LONG time and it’s only just come out of the shadows again. There is so much to say about this but I thought what Sam Maggs said about feminism just summed it up so succinctly that I’ll just use her words.

“We’ve been seeing people become more accepting of the term, which actually just means equality for all people… The best kind of feminism is intersectional feminism, which means your thinking about equality not just for different genders, but different sexualities and races and classes (etc). Wanting equality for everyone. Taking the stigma away from that word.  It gives people something to rally behind and that’s what we really need.” – Sam Maggs

“It gives people something to rally behind” that’s just a perfect way to explain the importance of the term feminism. If you need more convincing that feminism is an important term, check out this truth bomb moderator D’nae Kingsley dropped: “A 13 year old boy is more likely that a 30 year old woman to identify as feminist”. It’s not that shocking if you hang around women my age, but that doesn’t make it any less depressing that something so important has become so tainted.

From there panelists Meghan McCarthy and Aria Moffly talked about how making media for children gives them a lot of opportunity to challenge ideas, particularly surrounding gender. Like the fact that My Little Pony has been deemed cool for boys to like. Or that girls are more openly allowed to be into superheroes to the extent that DC is creating things specifically to feed that market. Considering how much more diverse children’s media is, it’s not really surprising that young people are more likely to identify with a term like feminism.

Finally the panel talked about the reality of making these changes happen. “The best thing about the entertainment industry,” said Dan Evans, “is that people just want to make money.” His suggestion was that we find a way to convince the powers that be that they are missing out on money, and we will see more diversity. Except it’s not that easy, because there is A LOT of evidence out there proving that people will pay to see characters like them reflected in our media – unfortunately like 20 years ago someone made a terrible film about Electra and now no one can ever make a female superhero movie again.

“I’m terrified about WonderWoman because I feel if we all don’t go and see wonder woman 50 times no matter how good or bad it is they’re never going to make another female super hero movie. “ – Sam Maggs

Even if women and POC people get into a creative position doesn’t mean that they will make a difference. The default is still the straight white male and it’s hard to shift that idea, especially when the people controlling the money fit that description. Issa Rae talked about trying to please networks just to get a show on the air, and losing her creative voice in the process. There is this idea that if you just get your foot in the door then you can make changes from the inside, but it doesn’t really work like that. You have to know when to fight and stay true to your voice.

“Sometime as an artist you want people to see your work, but you lose sight of yourself.” – Meghan McCarthy

Nobody’s Damsel was a super fascinating panel – and I hope I’ve managed to encapsulate some of that into this post – that raised some interesting questions about the depiction of women, and the lack of diversity in contemporary media. The main thing I took away from the panel is that we need more women. Everywhere. We need more female characters, we need diverse female characters. We need a diverse range of women behind the scenes as well. Because the more women there are the more people will accept diversity as default.

Previous:FEELINGS Daily: Everyone Freaked Out About Xena and Chris Evans Directed a Movie
Next: Friday in Ballroom 20 at SDCC: A TV Recap