Dear Geekiary: Should I watch Teen Wolf Season 5 for Sterek?

I am a huge fan of Teen Wolf and I ship Sterek. It was great to be part of the fandom in the beginning, especially during S1 and S2. However, since S3A and 3B I noticed a shift in the online fandom. I watched S4 and it has been very emotionally draining for me and the fandom reaction has been very negative, with some Sterek shippers saying the show queerbaited.

I believe such a thing happened and S4 even took out Danny. I’ve cried tears of anger and sadness a few times during S4. It was if they were deliberately keeping Stiles and Derek apart. I’ve read meta on Tumblr that Sterek is still there and Jeff Davis kept them apart for a reason. Should I watch S5 when it airs in hopes of seeing Sterek? I want to say I want to watch because of a coherent plotline as well, but I think we can all agree Teen Wolf doesn’t have that and the love for the characters has outgrown the love for the show.

Hi, Sad Sterek Fan, you are not alone in having the feelings you just talked about. A lot of fans have experienced a shift in the Teen Wolf fandom, especially since Season 3. The show gained popularity and a lot more people came. Along with them came different opinions about what they liked and disliked about the show. Now, I’m not going to go into the whole ‘who’s right and who’s wrong’ in the fandom or if the show is queer baiting or not because we have talked a lot about it in our Teen Wolf Masterpost.

Instead, I’m going to address a thing I noticed in your question. You said that Teen Wolf Season 4 was emotionally draining for you and you even cried tears of sadness. That’s a big ‘No’ as far as I’m concerned. If a show, may it be Teen Wolf or any other, is making you emotionally uncomfortable, you need to take a break from it. And I’m not saying take a break as in when the show is in hiatus. No, just stop watching, especially if you are hoping to see ‘obvious’ Sterek in the upcoming Season 5 of Teen Wolf.

If you think that’s going to be tough for you then why not just follow recaps or review of the episodes? We do a lot of that here. You can also get to know what happened in the and if ‘Sterek’ occurred in an episode by following the ‘Sterek’ tags on Tumblr. This way you won’t have to sit through an hour of Teen Wolf, which might have content that can make you uncomfortable, if there isn’t any Sterek, or it’s presented in a way that might upset you. 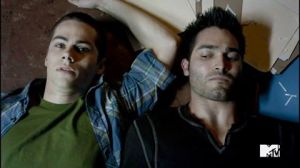 Shipping is a big part of fandom and it can be tough to deal with, especially when you ship a pairing that isn’t canon. But if shipping a pairing is making you feel uncomfortable when the show doesn’t make it canon then the best thing for you to do is let it go. Yes, you can make your voice heard. You can vote for the best ship on internet polls and whatnot, but all of that isn’t worth it if you are damaging your physical and/or mental health in the process. Will we see Sterek as a canon pairing on Teen Wolf? Who knows! I’m not a part of TPTB (The Powers That Be). What I can do is enjoy the show and call it out on stuff I don’t like.

Believe me, if I ever experience any stress because of Teen Wolf or find myself very unhappy because a fictional pair of characters weren’t shown as canon then I will stop watching the show. No show is ever worth mentally harming yourself over.

I hope my advice helped you. Feel free to check our reviews when Teen Wolf Season 5 starts to air, along with any other opinionated articles that might follow. If you like something you read then watch the new season, if not, then don’t stress over it and move on to other shows that might give you what you need.

Your own emotional health is far more important than any fictional show. If you are looking for TV shows with impressive LGBTQ+ representation then feel free to look at our recommendations of Queer Representation Series. These shows actually have major queer characters and you won’t have to worry about subtext. Enjoy!

Previous:Beetlejuice & Lydia Deetz to Return to the Big Screen!
Next: The Hobbit: The Battle of the Five Armies Review