Doctor Who: The Tenth Doctor Vol 1: Revolutions of Terror – Review 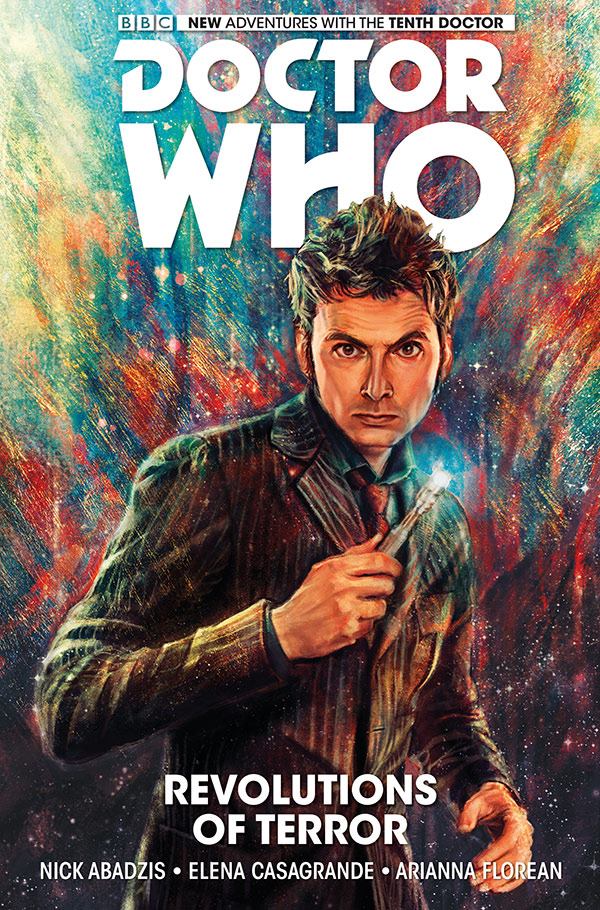 I was recently given a few Doctor Who comic trade collections. I must admit I’m not a huge Doctor Who fan, not because I don’t like Doctor Who – I do, it just doesn’t interest me as much as other TV shows I’m into.  I started with the Tenth Doctor because he’s my favorite.  For my first foray into Doctor Who comics, I was not disappointed.

This comic collection starts right after the Doctor was forced to leave his companion, Donna Noble behind.  He runs into a young woman named Gabby who is unhappy with her mundane life.  As true whenever the Doctor seems to be around, her life soon became much more interesting!  She and the Doctor find and defeat monsters shaped by people’s own fears and are able to save the day in time for the last of El Día de los Muertos (The Day of the Dead) celebration.  The only problem I had with the first story arc was that the writer used “La Día de los Muertos” instead of El Día de los Muertos which would definitely throw Spanish-speaking readers.  A Spanish speaking person wouldn’t say “La Día” as “día” is a masculine noun. I digress.

After Gabby and the Doctor had saved the day, Gabby asked if she could travel with him.  At first he was reticent, but allowed her to come as he felt she deserved a good vacation.  They traveled to another planet where they were able to interact with art. The Doctor felt this was something that Gabby, as an artist, would really enjoy. And she did – until it started attacking them, that is.

What interested me most about the second story arc was that the writer and artist took the reader between seeing what was actually happening to Gabby and the Doctor, and what Gabby was writing and drawing about their adventures in her journal.  My only complaint would be that Gabby’s handwriting in her journal was hard to read.  A different font would have been better. There were times where I wasn’t quite sure what was being said.  But, that might not be a detraction for everyone.

Ultimately I thought that the first volume of the Tenth Doctor’s comic book series was a fun read.  I don’t know if I would pick up the second volume though. The art wasn’t something I enjoyed, and Doctor Who itself is not a huge interest of mine.  However it was enjoyable to read, and I would recommend it to anyone who is a big fan of the TV show.