Doctor Who 11×1 Review: The Woman Who Fell to Earth 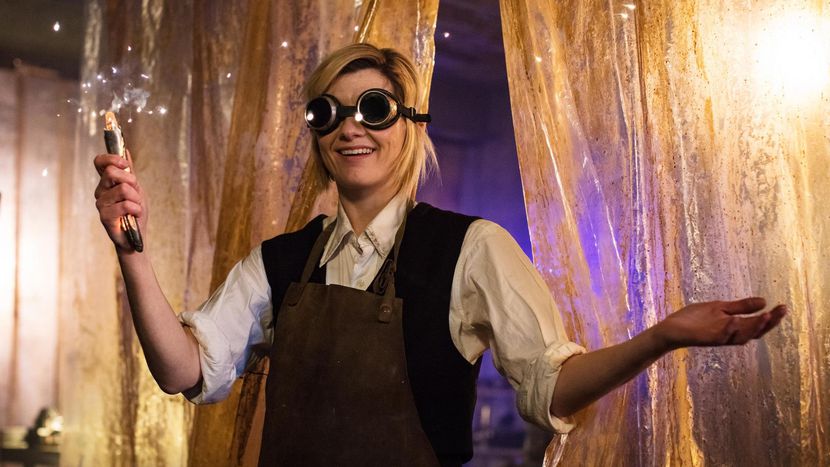 ‘The Woman Who Fell to Earth’ is a fantastic reset button for Doctor Who, infusing a new energy into a series that had hit an uncharacteristic slump.

The most obviously fresh aspect of ‘The Woman Who Fell to Earth’ is the casting of Jodie Whittaker as the Doctor, but it’s far from the only change.  This set of Companions feels more reminiscent of the Rose Tyler era, where they were plucked from every day life quite by happenstance instead of some big inevitable destiny.  Ryan, Yaz, and Graham feel like real people with real flaws who are being thrown into the intense world of the Doctor and I couldn’t be more excited to get to know them.  Don’t take this as a criticism of the past few Companions, though.  Amy has been my favorite since the moment she was introduced.  I will forever miss the Matt Smith era and still cry about the loss of the Seasons Five and Six TARDIS crew.  But at the same time, it is refreshing to get back to regular people plucked off the street.  There’s something about that dynamic that lends itself to a greater level of relatability. 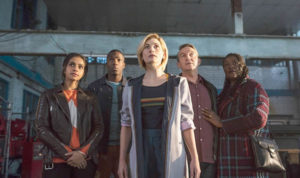 Ryan is particularly interesting as a Companion. I can see his propensity for touching random things being a hilarious character quirk.  We saw him touch two rather alarming alien objects in a matter of seconds, setting off the series of events that we saw play out throughout the course of the episode.  When he’s questioned about the urge to touch these things, it becomes apparent that this type of curiosity is shared between both him and the Doctor.  I feel like their relationship will be an interesting one filled with many misadventures- which honestly is sort of the Doctor’s MO.  In other words, he’s perfect Companion material and I’m excited to see this develop.  Ryan is flawed and that in and of itself is perfect.

Yaz is a bit more cautious than Ryan, but no less fierce and eager to prove herself.  She reminds me a bit of Martha in the sense that she’s extremely capable but needs an outlet to display her talents.  What better outlet than gallivanting across space and time with a Time Lord?  She hasn’t been developed as fully as Ryan’s family has been at this point, but she’s already interesting and we’ve only just begun.  Give her a bit of time and I’m sure she’ll be as fleshed out as the others.  I’m only one episode into this and I already have faith in the writers to deliver on that front.  It’s unusual to have faith in this show running team so fast and I could be setting myself up for disappointment down the line, but I’m going to just enjoy this positive feeling for now.  I look forward to more Yaz development and I have faith we’ll get it.

The third Companion seems to have been pulled in somewhat reluctantly.  Graham is Ryan’s grandfather by marriage, but it’s clear from their interactions that Ryan hasn’t quite accepted him as family yet.  He’d only been married to Ryan’s grandmother, Grace, for about three years before the events of ‘The Woman Who Fell to Earth’ ended her life.  Grace was the thing that brought Graham and Ryan together.  Without her they very well could have drifted apart, but now they’re floating in space along with the Doctor and Yaz and will undoubtedly get pulled along on many adventures in the near future.  They’re stuck together for a while at least and, with any luck, they’ll grow to recognize each other as family even without Grace being the glue that binds them together. 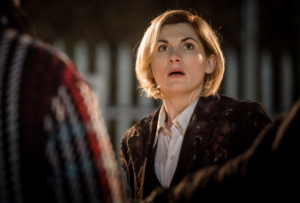 And lastly, we have the historic casting of Jodie Whittaker as the new Doctor.  The timing of ‘The Woman Who Fell to Earth’ is pretty amazing.  Doctor Who is a global show that’s produced in England, but for those of us in America there’s an added layer of meaning here.  Without diving too much into politics, it’s been a rough couple of weeks for women here in the USA.  To have the first woman Doctor premiere after such an intense news cycle is a small soothing balm against an intensely deep ache.  Of course it doesn’t make everything better in the universe, but it’s a reminder that progress is being made on some fronts even while the battle rages on elsewhere.  Small victories are worth savoring, and god dammit I’m going to savor this historic moment.

As with all post regeneration episodes, the Doctor is still trying to find her feet and really understand who she is.  In this case she has an entire new set of Companions, had to create a sonic from scratch, and had to rely on the kindness of her new friends to get some new clothing.  It was a tough regeneration very much reminiscent of Matt Smith’s and, now that she’s got the basics (except her TARDIS), I expect we’ll get to know more of her actual personality soon.  The small bits that we’ve gotten through the confusion of regeneration have been delightful already.  Jodie Whittaker isn’t just ‘the first woman Doctor,’ but a wonderful new iteration of the classic character in her own right.  I can’t wait to get to know her better.

‘The Woman Who Fell to Earth’ ended on a cliffhanger, so if you weren’t already excited about post regeneration adventures already, you certainly should be now.  The Doctor is floating in space with her new crew and oxygen is no doubt going to be an issue very quickly.  The conclusion of this tense moment, along with whatever the new opening credits end up being, are just a little less than a week away.