Nickelodeon is always a solid presence at San Diego Comic-Con, with an eye-catching booth to boot! It’s hard to forget last year’s giant pineapple! But this year, the focus was on a lot of revivals – like Double Dare, Invader Zim, Rise of the Teenage Mutant Ninja Turtles… While checking out all the booth had to offer, I was fortunate enough to sit down and chat with Eric Bauza, the voice of Splinter in Rise of the Teenage Mutant Ninja Turtles, about the upcoming series.

Tell me what you guys have here.

I just did a walkthrough around this entire Nickelodeon booth, which seems like an impenetrable fortress this year. We have stuff representing Invader Zim, we’ve got Rise of the TMNT, we’ve got some Loud House. But I’m here on behalf of Rise of the Teenage Mutant Ninja Turtles. It’s gonna be exploding on the small screen this fall. However, this Friday, after the sports awards for Nickelodeon, they’re having a very special sneak peek of the first episode.

This Friday on TV. [Note: This was last Friday. I fail at life.] We do have a Comic-Con panel, which will feature some of the– I’ll give you a spoiler. It’s not a full episode, but it’s definitely one of the biggest fight scenes in the first episode. So if you’re out there now – I don’t know when this hits the internet, when your vision goes back from double to single – you’ll be able to enjoy that this week. At the end of the week. So if you’re out there, please tune in.

You know, […] I grew up watching the original. As a young adult male, I got to work as Tiger Claw on the 2012 series, and knowing that I get to be a good guy on the very present, very current series as Splinter is like a dream come true for me. And there’s a couple other projects I wish I could talk about – Turtle-related – but there’s stuff coming that’s going to blow your mind. Outside the series.

Tell me a little bit about the new show. How does it fit in? Is it completely different from the other series? Does it incorporate some of the earlier series?

Here’s the thing. You can’t beat around the bush with the actual title of the show – Rise of the Teenage Mutant Ninja Turtles. It’s said to have been a somewhat of a prequel series. Yet it seems so different. 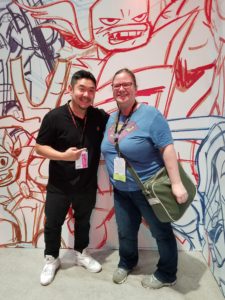 I watched the very first episode the other day, so I’m fresh off the pilot. As a fan, it’s definitely familiar. As a fan of the original series, I am confident that you will love this show. They don’t just pick any random person off the street to make a new series with these guys, you know what I mean? So there’s going to be so many familiar elements to these characters – Michaelangelo, Leonardo, Donatello, and Raphael. It’s like, these are now characters that are 30 years old. They’re no longer teenagers. Yet they’re teenagers at heart.

They’re the equivalent of, like, Shakespeare characters. If you’re an actor and you know this show, and here’s an audition for Raphael, you’re going to take every version of the show that you’ve seen – whether it be the movie, comic books, previous series – and you’re going to pour your heart and soul into these characters. Me – when they told me that I had a chance to audition for Splinter – I lost my marbles. All I could think of was Kevin Klash voicing Splinter in the movie. [Splinter voice] “I made a funny!” You know?

There are so many familiar moments in this series that will hearken back to any version. But yet, if you just watched a previous version of the show, or the movies, you kind of don’t want to see that again if it’s already run its course. The previous series that was on television – I was a part of, I love it, it’s so near and dear to my heart – but as a fan, if it had its full run, why would you want to see someone else try to do that same thing again? I would like to see someone do something different with it.

This is as different and crazy as it gets with combining elements of the modern Turtles. Even if you weren’t a fan of the Michael Bay movies – I watched them both in theaters. I loved it. It was a roller coaster ride. I actually watched the first one in a theater with the moving seats. Have you been in a theater with those?

I’m actually from the D-BOX Technology company, I’m selling technology on moving movie seats. No, there’s this thing called D-BOX Technology, and they offer it to most high-octane, action-packed, blockbuster movies – including Star Trek, Star Wars, Ninja Turtles – where the first four rows of seats in a regular movie theater, like an AMC movie theater, the seats move. Like, if someone gets punched in the face, you feel like you just got punched in the face.

So, the first time I watched the very first Michael Bay movie was that experience, and I gotta tell you, I liked it. People are purists out there nowadays. We live in an age [where] the fans know more than the people making the actual show, so we have that working against us. But I feel like this series in particular, again, it’s like the heart and soul of these characters exist. And I think it’s fun when you take familiar characters and put them in all-new situations and give them all-new abilities.

Like, there’s been a changing of the guard with Raphael being the leader. That’s always been a head-butting situation – brother against brother, Leo vs. Raph. Now we change the seats, we switch it around, and we make Raph the leader, and we see… Who knows, down the line, if they do a switch. We don’t know. We don’t know. You’re just going to have to tune in and find out.

That’s what’s so exciting about this show, is that we switch things on you on a dime. We challenge the aficionados out there. Also, in the previous series, we’ve established the fact that in Dimension X, there’s multiple universes going on. So who’s to say, in the run of the series, you may or may not run into some old characters that you may have fallen in love with in other shows. Who knows? Anything goes in Ninja Turtles. I’ve learned that the easy and hard way. What if there’s a scene with Tiger Claw vs. Splinter? How am I gonna voice that? My brain’s gonna split in two.

What are you most excited for fans to see in this new series?

I first saw the series as a 2D cartoon. Bringing it back to its 2D roots… They got Ant Ward and Andy Suriano at the helm. I’ve been buddies with both of them – but more Andy. He’s a very established comic book artist. And it looks like a moving comic book. We’re talking hard shadows and stuff that you can’t achieve in CG that only 2D hand drawing can accomplish. So I feel like if there’s a lot of fans of the old-school Ninja Turtles, this is going to make you want to pick up a pencil and draw these characters again. To any budding cartoonists out there, it’s very inspirational and refreshing to see. We live in a digital age, but stuff that was created by hand, that will remain that way.

If you could write an episode, what would you have happen?

Oh my gosh. Well, it would definitely be an all-Splinter episode. This series, Splinter is unlike anything you’ve ever seen. He is the drunken master, he is lazy, he doesn’t know their names. So he goes, “Uh, orange one, you take red one and you go to store and get me dumplings.” He likes snacks. He is a tough love kind of father, too. He is not the sensei that we know. It’s almost like if Yoda and a rat had a baby, it’s going to be this Splinter. You guys are going to love it.

Thanks again to Eric for taking the time to speak with me!

You can catch Eric as Splinter in Rise of the Teenage Mutant Ninja Turtles, coming to Nickelodeon on September 17. But you can currently watch the first five episodes over at Nick.com or on the Nickelodeon app! Cowabunga!

Want more Rise of the #TMNT? Episodes are now available on the @Nickelodeon App! pic.twitter.com/rDLrFqWqfE