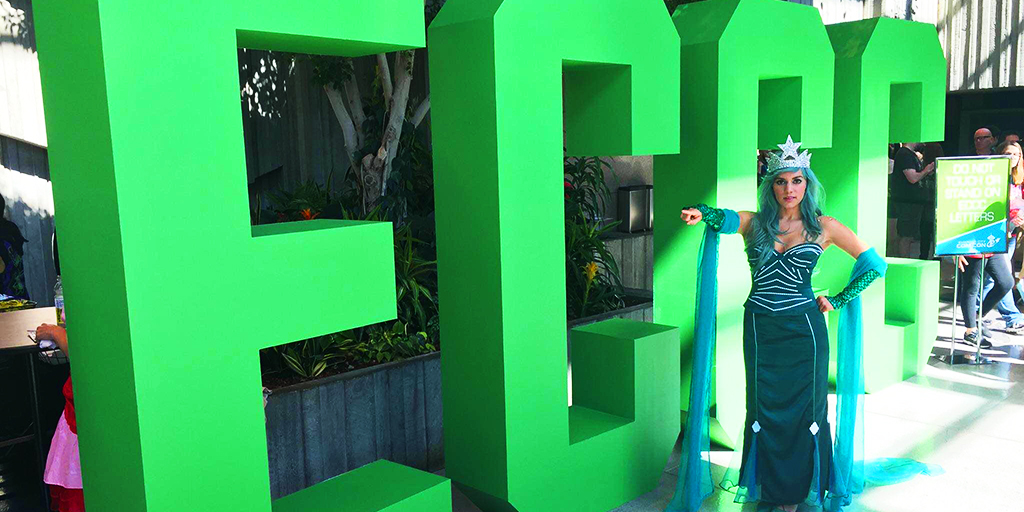 When I noticed the Better Cup project I was immediately intrigued.

If it’s one thing we know well here at the Geekiary, it’s that us geeks can be very socially conscious and politically active about the causes that are important to us.  Combining the two activities seems natural to us, so I was eager to reach out and find out what Better Cup was all about.  Organizer Jay Carmona was happy to fill me in.

Your project seems like an awesome blend of geekery and activism.  What inspired you to cosplay and attend conventions as part of the Better Cup project?

Thank you! When I went to my first convention my mind was blown. Comics and fandoms–geekery–I like that word– have always been a huge part of my life, and I try to bring that influence and creativity into how I think about politics and organizing. This project makes a direct link between the personal and professional parts of my life, and I realized very quickly that the same was true for my whole team. So, really, when we were looking at this campaign I said: “who drinks coffee and hangs out on computers and might care about this stuff?” The answer was right there, and I’m lucky enough to have a team and an organization that got it and said, “Yeah! Let’s do this crazy thing!” Stand has been doing corporate campaign work for nearly 20 years, and we’re used to looking at issues in new ways. We also wanted to appeal to an audience that is a bit outside the traditional comfort zone of an environmental group. I’m constantly inspired by the ingenuity, skill, creativity and love that goes into cosplay, and we wanted to bring some of that to the issue here, which that amazing people who drink coffee (and tea!) deserve a cup that doesn’t harm the environment. 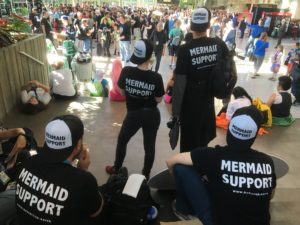 Was Emerald City Comic Con the first convention that you attended for this project?

Yes. It was pretty fun explaining what a convention is like to our team beforehand. I started getting emails saying, “what’s a Deadpool?” and I knew people were hooked.

How was the reaction to it?  Were people generally receptive?

ECCC has such a great atmosphere. People were psyched, and mostly just floored that Starbucks cups aren’t recyclable. People would walk up to us holding the iconic, white Starbucks cups and go, “I can’t recycle this?” And with extremely few exceptions, they can’t. This campaign is about fans of Starbucks and fans of coffee saying, “Hey, we love this product, and but we want a cup that’s better for the environment.”

Any other conventions on the horizon? 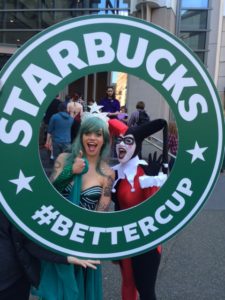 Some people have asked us about SDCC, but we don’t have plans for more conventions, yet. I’m partial to fan-run cons, and we have plans for other, mer-themed events coming up. So people should stay tuned. Also, since we’re depending on volunteer merpeople — it’s really up to you–so join us and maybe go to a con dressed as a merperson.

What’s the ultimate goal of the Better Cup project?

Starbucks serves four billion disposable cups a year. It takes 1.5 million trees each year to supply those cups, and those trees are being clearcut from forests, leaving behind environmental destruction — not good for mermaids. So, we want Starbucks to do three things: Commit to 100% recyclable cups (right now even if you put them into the recycling they’re not getting recycled), 100% recycled or tree-free cups, and commit to incentivizing reusable mugs at their stores to the tune of 25% of drinks being served in them. It’s simple, doable, and actually, these are goals they committed to themselves in 2008 — but failed to hit. You should join Team Mermaid.