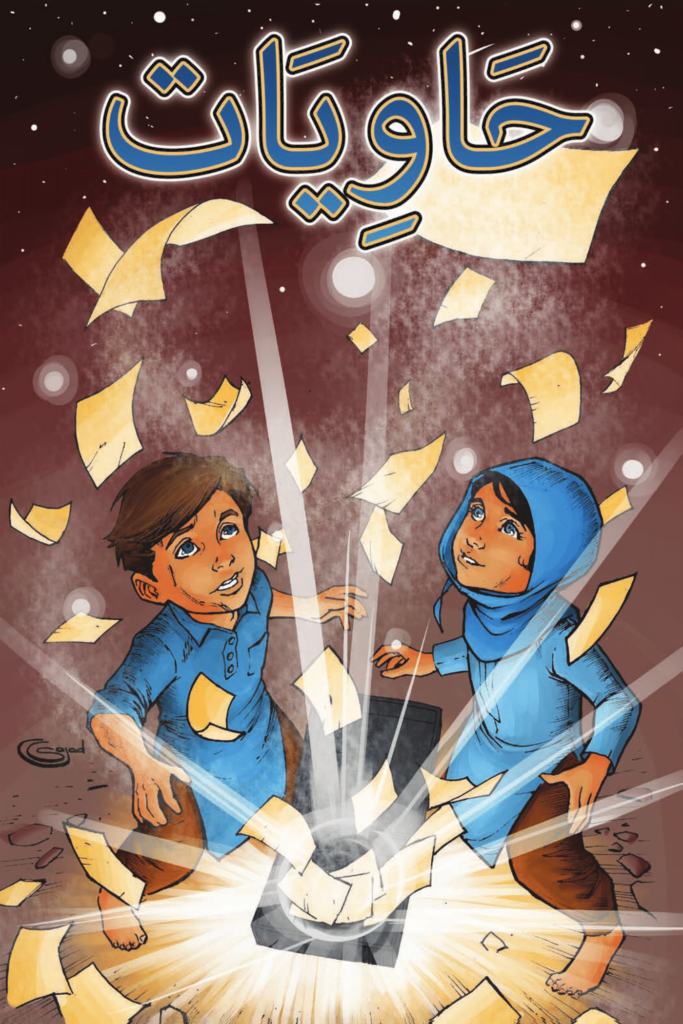 The first edition of Haawiyat, an Arabic-language comic created by the non-profit group CYRIC, has reached Turkey and is being distributed to Syrian children who were displaced by violence in their homeland.

Haawiyat is the creation of Comics for Youth Refugees Incorporated Collective (CYRIC). This group makes all-ages comics for refugees based on folktales from their own culture. They worked with mental health professionals and refugee experts to choose tales that will comfort the children. (There are a lot of kids, too – almost half of Syrian refugees are under the age of 12.)

This first book takes its name from ships that were sent to bring supplies over for the refugees. Three stories are told over its pages, mostly black and white. The stories were adapted for comics by A. David Lewis and translated by Farrah Hamza, with art by different volunteer artists. Joseba Morales draws “The Story of the Five Cakes”, Rob Croonenborghs handles “The Story of the King’s Daughter’s Earring”, and Ursula Murray Hested illustrates, “The Story of the Miller and the Two Djinn”.

The awesome cover art (at the top of this article) is from Shajad Shah and colored by Jim Dash. Ghost Glyph Studios did the lettering.

The comics were distributed by the non-profit NuDay Syria to children in Istanbul and Gazianteb. There were more kids than copies of the comics, since Haawiyat was considered a “proof of concept” project by its creators.

Now that it’s been proven successful, the creators are working on a bigger second issue. “For phase one, all production and services were donated or volunteered,” says Lewis, the project leader. “In phase two, we hope the expanded incarnation of the title will have more stories, be in full color, AND go out to many more deserving children!”

I had a chance to read the current volume of Haawiyat. It was charming, with uplifting little stories that focus on the inherent goodness of people. As an all-ages comic it’s meant for kids, obviously, but it was still a cute read. The back cover is laid out with blank comic boxes and an invitation for kids to draw their own story, which is a fun idea.

Fundraising for the next volume of Haawiyat has begun through Razoo. CYRIC is also looking for creators who are interested in contributing to the second issue. Anyone who might want to take part can email a link to their portfolio to main@syriacomic.com.

What do you think about this project? Share your thoughts in the comments below!