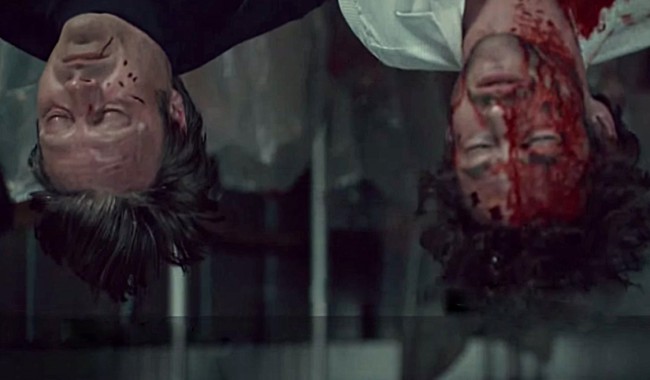 Ouch, my heart.  Despite this being a mid season episode, it felt like the end of an arc.  In a way it was.  Hannibal and Will are no  longer playing a global game of cat and mouse, Jack has finally ‘caught’ the Chesapeake Ripper, and Chiyoh, despite her very short time on the series, has now wandered off to do her own thing.  She just can’t watch Hannibal rot in a cage, I suppose.  But really, the most painful thing of all was that horribly intense look between Will and Hannibal as Hannibal was giving himself up to Jack.  It was so intense, I’m going to just let actor Aaron Abrams’ tweet summarize my feelings in the perfectly snarky way that is so Aaron Abrams…

Anyone else feel like this was the influence for #Hannibal coming out with his hands up and saying he was still here? pic.twitter.com/jJcvuF9hpy

That summarizes it quite nicely, Mr Abrams.  Well done. 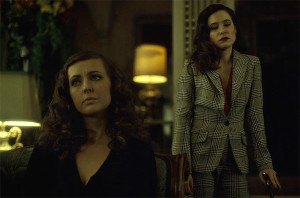 Outside the dramatic break up between our beloved cannibalistic serial killer and the poor damaged FBI agent who has been hunting him, there was plenty of WTF moments this episode that left my head spinning.  I hate to shout ‘I called it’ for shows, because really that’s just rude, and in this fandom being rude puts you on a dinner plate, but the moment Mason said Margot’s surrogate was ‘on the farm’ I knew exactly where it was heading.  I was hoping I was wrong, though.  It was horrible and disgusting and crosses over into elements of body horror that disturbs someone with an unusually high tolerance towards the grotesque.  Yes, dear Margot, I hate to break it to you, but your baby is inside that pig.

The conclusion of the Mason Verger story was perfect, though.  Margot got her revenge and Hannibal agreed to take the fall.  What a sweet guy.  On top of that, she’s got her brother’s sperm and can now carry on the family line.  I hope Alana acts as a surrogate and their happy relationship continues for a long long time.  I’m going to need copious amounts of fanfiction about Margot, Alana, and their Verger baby on the estate together.  It’s the gender swapped murder family counterpart to Will, Hannibal, and Abigail.  I’m going to live in a happy universe where all six of them live happy murder family lives together.  Thanks for warping my brain, Bryan Fuller.  I blame you for this entirely.

I do feel quite punched in the gut over the original murder family, though.  Both Hannibal and Will seem conflicted about their feelings about each other.  One minute Hannibal is slicing Will’s head open with a saw.  The next minute he’s saving Will from death and giving himself up to the FBI just so that he can stay near him.  Will, on the other hand, is chasing Hannibal all over the globe and then, well, let’s use a tweet Mr Abram’s again to get to the heart of the matter…

Remember when the guy who chases murderers told the murderer I love you but I’m not in love with you hey you have a great evening. #Hannibal

Outside of the show itself, I think I’m going to miss Aaron Abram’s tweets the most.  Dude knows how to get to the point.

So here we are, at the end of an era.  The end of Hannibal?  Oh my no.  I refuse to think that way.  The show isn’t over yet.  But it is the end of Will and Hannibal’s origin stories.  We’re now plunging head first into Red Dragon and nothing can stop us.

Previous:FEELINGS… with The Geekiary: Post SDCC Special
Next: Junjou Romantica 3×2 Review: Failing to Plan Is Planning to Fail