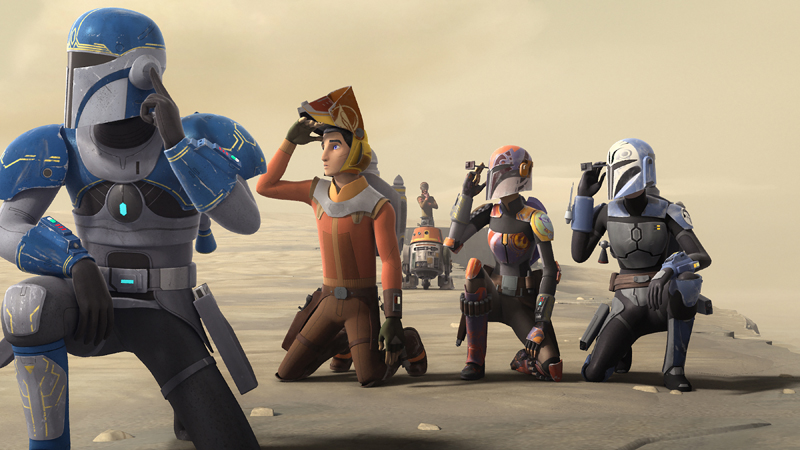 The fourth and final season of Star Wars Rebels started with a bang in “Heroes of Mandalore”, a two-part season premiere that takes place entirely on, you guessed it, Mandalore.

Our “Heroes of Mandalore” were in pretty dire straits at the beginning – and again twice more, later in the episode – but even I was surprised at how easily things came together (not just in the end but several times throughout the episode). Of course, I don’t want to complain too much; only one of these situations was truly frustrating, and I’ll get to that in a bit. 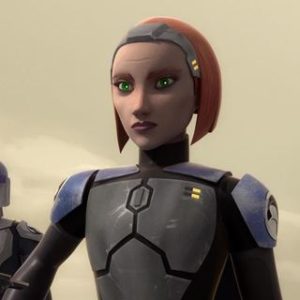 After all, “Heroes of Mandalore” brought back none other than Bo-Katan Kryze, former leader of the Nite Owls and lieutenant in the Mandalorian terrorist group Death Watch. She last appeared in the fifth season of The Clone Wars, and played a big part in the Rebels season four premiere. First she saved Sabine, Ezra, and friends from the Empire – a save I can absolutely get behind – and by the end of the episode she was infiltrating Saxon’s Star Destroyer with them, giving Sabine some hard advice, and taking the Darksaber – and the leadership of Mandalore, such as it is – in hand.

There was also the usual slapstick style comedy in this double episode, namely Ezra struggling with a jetpack. As usual, though, Chopper stole the scene, this time by flying through the air and hitting one of the stormtroopers over the head during their attack on the convoy that was transporting Sabine’s father. Less amusing (despite their attempts to be) were Sabine and her father’s interactions. After years of Sabine being separated from her family, the forced familiarity between them, and her father’s attempt to make light of his critique of her art, just felt awkward.

Unfortunately their reunion was interrupted by the use of the Duchess, a weapon designed by Sabine herself, one that was specifically made to target Mandalorian armor. At first viewers were led to believe that Sabine’s mother and brother were killed in the attack, and while this plot point felt a bit cheapened by the fact that they survived, Star Wars Rebels is a cartoon, and a family-friendly one at that (I suppose it’s technically meant for kids, but I know a LOT of adults who love it). It would have been one heck of a dark turn for them to kill off half of Sabine’s immediate family with this weapon that Sabine herself helped create.

And wow, is it a *weapon*. Even Thrawn seemed surprised (as much as he can show anything like emotion) that Saxon was willing to use it against his own people, considering that at its highest setting the Duchess basically cooked the Mandalores wearing the armor to ash. Of course that didn’t stop Thrawn from suggesting that Saxon use Sabine to fix the weapon’s range problems. 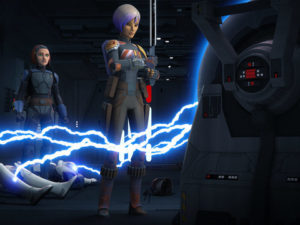 So as previously mentioned, those titular “Heroes of Mandalore” ended up on Saxon’s Star Destroyer to take down the Duchess…and while it wasn’t as easy as they’d hoped (it was a trap!), in the end they won the day. And while I can even get behind that – because who needs another TV show with a depressing season premiere? – the fact that they simply destroyed the Duchess left me speechless. Sure, Sabine using it to essentially torture the stormtroopers after reconfiguring it to target their armor wasn’t great, but really the only reason to not deliver a weapon like that to the Rebellion is because, well, it would win the war for them…and obviously that can’t happen at this point in the story.

While the fourth season premiere of Star Wars Rebels was certainly enjoyable and at least added to Sabine’s character arc, I have to admit that I’m hoping for a bit more oomph in the rest of the season, especially as it’s the last one we’re going to get.