Jordan Peele’s “Us” Gets Digital, 4K, Blu-ray, DVD and On Demand Release This June! 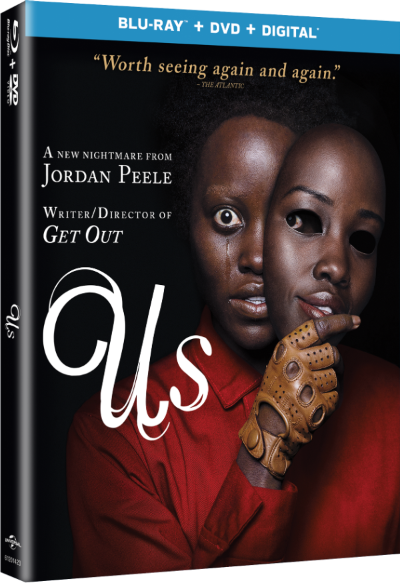 The Us home release will be giving fans more than 50 minutes of bonus features “delving deep into the mind of Jordan Peele, his filmmaking process and the symbolism” behind his latest successful movie.

Set along the North California coastline, Adelaide Wilson (Nyong’o) reluctantly returns to her beachside childhood home with her family and finds that she is haunted by unresolved trauma from her past along with a string of eerie coincidences. As darkness falls after a tense day at the beach, the Wilsons discover four figures standing in their driveway. They soon realize this is only the beginning of their troubles as they find that the four figures are terrifying and uncanny opponents: doppelgängers of themselves.

The Exclusive Bonus Features on 4K Ultra HD, Blu-ray, and Digital are:

The Bonus Features on 4K Ultra HD, Blu-ray, DVD, and Digital are:

The film will be available on 4K Ultra HD in a combo pack (4K Ultra HD, Blu-ray, Digital). Bonus features on the 4K Ultra HD will all be delivered in “stunning” 4K resolution.

The Technical Information for Blu-ray:

Us has a run time of 1 hour and 56 minutes. It has been rated R for violence, terror, and language.

Released on March 22, 2019, Us has grossed more than $245 million at the global box office against a $20 million production budget.

Previous:“Sonic The Hedgehog” First Official Trailer Released! It Isn’t As Bad As I Thought It Would Be?
Next: The DC Collectible Figure Collaboration With China’s Imperial Palace Highlights Cultural Art