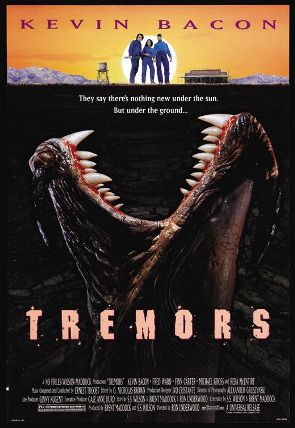 Fans of the original Tremors can rejoice as the horror-comedy franchise is getting another shot at a television revival with Kevin Bacon reprising the role of Valentine McKee!

According to Deadline, a Tremors TV series is in the works with Kevin Bacon set to star as well as executive produce with Jason Blum’s Blumhouse Prods. Andrew Miller will be penning the adaptation.

Tremors came out in 1990 and even though Kevin Bacon thought it was a career low for him, the film eventually went on to gain a cult status and four direct-to-video installments. There was also a spin-off TV series in 2003 but it ended after just one season on the Sci-Fi channel. However, it seems producers still think there is enough juice in the franchise for another TV series, and I don’t blame them. I’m a fan of Tremors and if done right the up-coming TV series could be enjoyable with the added bonus of Kevin Bacon coming back to the franchise after 25 years.

There is no network attached to the project yet. So, I’ll keep you updated if the series gets picked up, which I think it will.

Are you excited about Tremors coming back as a TV series? Who else from the original cast would you like to see again? Let us know!