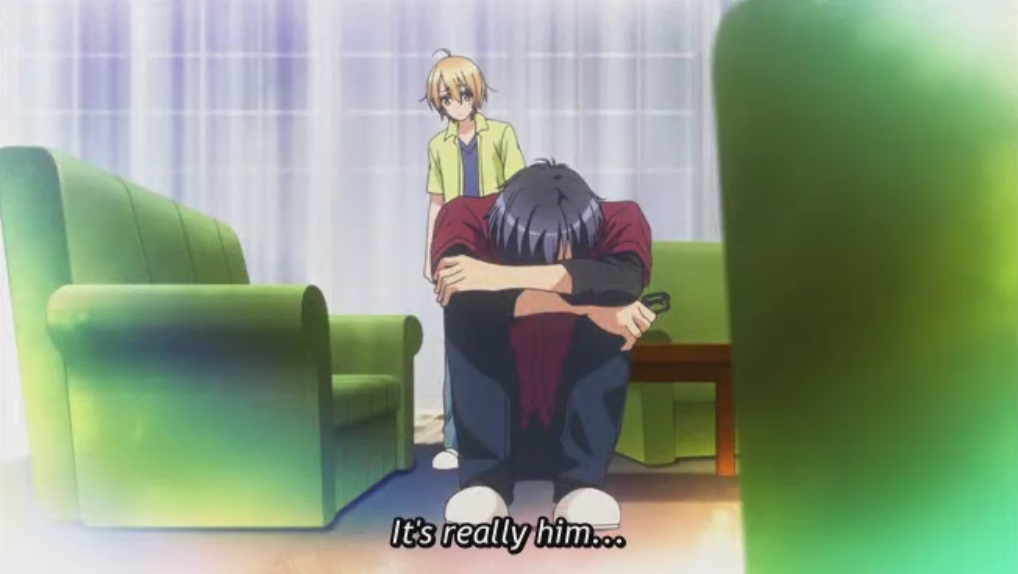 Love Stage!! keeps getting better and better with each episode.  Unfortunately, this episode did fall into one of the tropes that’s so prevalent throughout the yaoi and shonen-ai genres with the introduction of a scene that stands precariously on the corner of non-consensual and dubiously-consensual.  It’s a trope I try very hard to avoid, but it’s so common in this genre that it seems to pop up even in the most lighthearted shows that I come across.  Moving past that ‘incident,’ the episode delivered all the things I’ve begun to enjoy about the characters in this universe and continues to offer a very appealing artistic style.

TRIGGER WARNING: This episode had a dubiously consensual sexual scene.  Proceed with caution.

The episode starts off once again highlighting Izumi’s fascination with LaLaLulu.  His entire bedroom is decked out with merchandise, including an alarm clock that has her voice set to wake him up with a chipper greeting.  Not only does his fascination with her highlight his geeky qualities, which many readers of this site can relate to, but it also points out his tendencies to fluctuate when it comes to gender expectations.  We already know that visually he can be mistaken for a girl at times, but here we have a boy who is very proudly interested in Shoujo anime.  The fact that he sleeps with a LaLaLulu body pillow sexualizes it somewhat, but when he fantasizes about her it tends to focus on her giving him words of encouragement and inspiring him rather than anything overtly sexual.  He’s a boy who can relate to a strong female character who is decked out in pink and he doesn’t seem to have any shame about that fact.

A large portion of this episode dealt with Ryoma coming to terms with the fact that he still has feelings for Izumi, despite him being revealed as a man.  He’s quite clearly thought of himself as heterosexual up until this point, but he can’t stop thinking about him to the point that it’s actually throwing him off at work.  He makes up an excuse to go visit him in an attempt to see him one last time before pushing him out of his mind completely.  This doesn’t work out quite as he planned, though, and he ends up forcing Izumi into a sexual situation against his will.  The atmosphere of the scene changes quite dramatically as Ryoma realizes he’s enjoying the nearness to Izumi, which shifts it from being forceful to something strangely gentle and intimate.  Izumi is still thrown by it all, though, and had not at any point given explicit consent for them to continue. 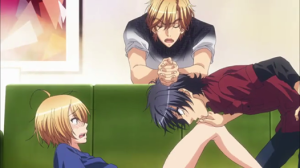 But have no fear, because big brother Shoga saves the day by bopping Ryoma on the head.

Can we please talk about how amazing Shoga is?  At first I thought he was going to be a stereotypical “rock star” type of character, but he keeps showing his true colors with his protectiveness towards Izumi.  He’s still quite flash and full of himself, but you can’t say he’s self absorbed to he point of not caring about others.  Despite the disconnect between his and his brother’s personalities, he still obviously loves his brother a great deal and won’t let anything bad happen to him as long as he can help it.  In this case it meant him stepping in when things were getting really “bad” for his brother.  While the scene’s dubious-consent is definitely uncomfortable, Shoga’s acknowledgement of how wrong the situation is and last minute rescue does save it from becoming a show ruining moment for me.  All hail Shoga.  Praise be to Shoga.

The episode ends without much resolution to their intimate encounter.  It’s clearly throwing both Izumi and Ryoma off.  Ryoma can hardly work and Izumi has confined himself to his room.  Their feelings are obvious to the both of them now, but neither of them really seem know how to handle it.  But let’s be fair, they’re both teenagers and tackling both their first love and questioning their own sexuality is a lot to deal with at such a young age.  Something tells me that Izumi’s family will be supportive, but Ryoma?  We really haven’t seen much of his personal life.  All we know is that he’s assumed his own heterosexuality up until this point, but beyond that his personal situation has yet to really be touched on.

Previous:Comic-Con: A First-Timer & Cosplayer’s Perspective
Next: Naruto x 687 Review: I Know You Will