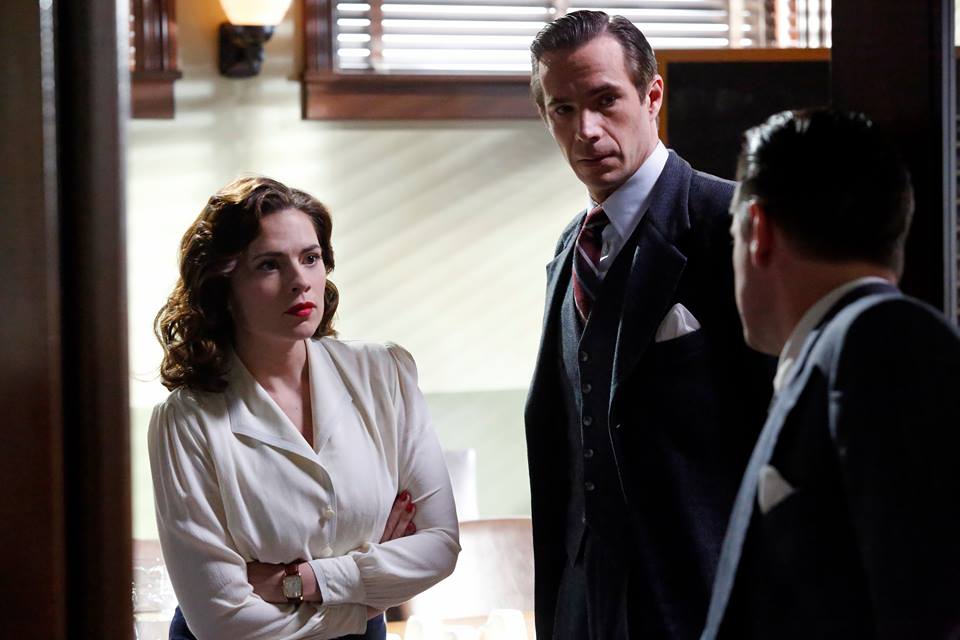 The good thing about most of the regular cast of Marvel’s Agent Carter being male is that if they want to kill a major character it’s probably going to be a dude. And it was. A dude. In fact it was the head dude. The dude I had kind of started hating slightly less than the other dudes. But at least he went out with a bang. Literally. Have I mentioned how much I love this show yet today? Because I really fracking love this show!

Okay, so this week on Marvel’s Agent Carter: Peggy is under arrest, but she doesn’t have time for the misogynist interrogation techniques of her colleagues – there’s a Black Widow on the loose in New York, and it’s probably going to end in disaster. Jarvis attempts to help Peggy out by marching into the SSR and handing over a signed confession from Howard Stark. Unfortunately, Howard is still avoiding his responsibilities, so Jarvis had to forge the confession. Peggy was not pleased. Meanwhile Soviet spy Dr. Ivchenko is still being allowed to do what ever the hell he wants, and what he wants is to hypnotize Chief Dooley.

When Peggy and Jarvis spot Ivchenko communicating with Dottie, she has no choice but to tell the truth and hope that the dickbags she works with are at least professional enough to check it out. They are, apparently, so that’s one point for them. The problem is that Sousa and Thompson head across the street to look for Dottie, leaving Dooley alone with Ivchenko. Dooley gets hypnotized, handcuffs Peggy and Jarvis to a table, and helps Ivchenko escape with one of Stark’s bad babies – Item 17. In the end Dottie and Ivchenko get away because everyone else is too busy dealing with the explosive vest that Dooley stuck in.

Also, Dottie buys a baby carriage and uses it to douse an entire cinema with some kind of gas that makes them homicidal, resulting in many dead people…and one lucky couple that was late for the movie because they were looking for free parking. Oh, and Dooley exploded. In mid-air. After jumping out of a window. And it was as cool as you might imagine.

The thing about Marvel’s Agent Carter is that there is so much to say about it after every single episode. After I submit every review I think of at least 5 other things that I should have mentioned. Because I could talk all week about the way that it presents sexism, and how the women in this show – particularly Peggy but the others as well – negotiate that sexism. Then there’s also the fact that this show fits into the wider Marvel Cinematic Universe, because it does in really cool ways. There’s also just the character analysis, because every single character on Agent Carter could have an entire thesis dedicated to them. I could talk about the stunt work, the visual effects, and the costuming for hours on end.

But none of that expresses my general enjoyment of this show. Because when I’m watching every week, I’m too caught up in the story to notice anything else. I just want to know what’s going to happen. I really care what’s going to happen. And that is the mark of a good television show. As all of you are probably aware of Agent Carter’s brilliance, I won’t bore you with any more gushing. I just think it’s important to note that first and foremost, this show is entertaining as hell.

First things first, Bridget Regan is brilliant. She’s just so great as Dottie, and I really really hope she doesn’t die next week so that she can continue to come back season after season. And yes I am just assuming that there will be many seasons of Marvel’s Agent Carter because the alternative is just too horrible. But that’s not the point here – the point is that Bridget Regan should play the morally dubious but incredibly sexy and sexually fluid female villain in everything from now on.

Next, Chief Dooley’s final moments were great. Kudos to Shea Whigham for making me care about a character that I generally want to see get beaten with a stapler (yes that’s a thing now). Don’t get me wrong, he was still a sexist douche…but he was also a person, and I feel bad when people die. Not as bad as I feel when dogs die, but bad enough for it to be uncomfortable. And I have to say, even though I knew it was going to end with his death I was on the edge of my seat for that entire confrontation.

Now let’s talk about Peggy Carter calling out the three men she works with on their very different versions of misogyny. “You think you know me,” says Peggy after they question her ability to keep her actions a secret. “ But I’ve been that what each of you has created.” To Chief Dooley she is “a stray kitten on your doorstep to be protected.” To Thompson she’s “the secretary turned damsel in distress.” And to Sousa she’s “the girl on the pedestal transformed into some daft whore.” 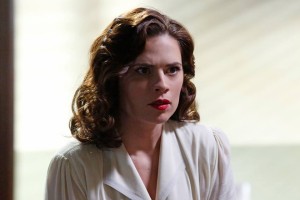 Each of these accusations is cutting and relevant in its own way, but it’s Agent Sousa’s that is the most powerful. Because he’s supposedly the ‘nice guy’, he’s the one the media has been pegging as a romantic interest since day one. He’s the one that’s on her side. But he’s no different than his workmates. He still doesn’t see Peggy as who she is. As a person. He still puts her in a box and ignores her flaws, which is why he was so angry at the idea that Peggy wasn’t what he thought. Dooley and Thompson’s misogyny is more overt but Sousa’s is more dangerous. And I am so proud that Peggy called him out on it.

Finally, I have to say that every time Hayley Atwell says Steve Roger’s name on this show a little piece of me dies. She infuses so much heartbreak into these tiny moments and it’s beautiful. Hayley Atwell is a dream and should star in everything that is ever made from now on. Okay? Good.