This week’s episode of Arrow proved to be a true switch-up, with Oliver back on Lian Yu in “real time”, and visiting Starling City in the flashbacks. The thing is, I wish I’d had more than one episode to get used to this, because I feel like if done right it could have turned into a hell of an arc. Instead they left it as a one-shot, and therein lies just one of the problems with Arrow season three. 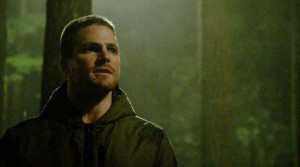 “The Return” was almost an even split between real time and flashbacks, and while I understand the importance of witnessing Oliver’s trip to Starling City, this really took away from far more interesting storylines – like Slade Wilson loose on Lian Yu, of course. At first I found myself rolling my eyes over Oliver and Thea’s little “camping trip”, but once it turned out that Merlyn (that crazy, crazy man) had released Slade from his A.R.G.U.S. prison on the island, I was much more interested in that than what was going on in the Starling City flashbacks. I honestly couldn’t have cared less about Oliver’s mission, though to be fair it was interesting to see glimpses of Thea’s past, the beginnings of Laurel’s relationship with Tommy, and Quentin Lance’s fights with Sara’s first “death”, with alcohol, and with Laurel over her decisions. 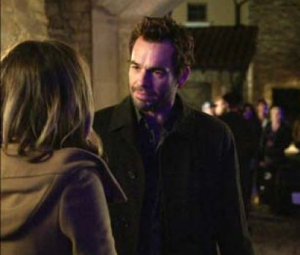 Speaking of Laurel and Papa Lance, while I understand the later inclusion of a real-time scene between them, I feel like we should have caught a glimpse of them (in the current timeline) earlier in the episode, as well. Even with their flashback storyline, it was a bit jarring to have just that one moment between them – especially as this was the first time we saw them since Laurel finally admitted the truth about Sara’s second (and very real, this time) death. While Papa Lance’s anger and frustration is understandable, and while the flashbacks featuring his past anger certainly added more weight to his current decision to distance himself from Laurel, it seems like a bit of a leap from him crying in her arms in last week’s episode.

I’m also a bit torn about the flashbacks including cameos by so many characters. Some of them absolutely made sense – Thea, Tommy, Laurel, and Quentin, especially (both for their own story lines and for Oliver’s) – but others felt like nothing more than fanservice. As I prefer the darker (and in some ways, the more “sensible”) side of Arrow, it was hard to come to grips with Diggle conveniently being a bouncer at Tommy’s party and Felicity conveniently wandering into the office while Oliver was there gathering intel.

In the end, though, to me it seemed like the truly important development in “The Return” involved Thea. She now knows about her part in Sara’s death – and she knows that Merlyn orchestrated it. I practically did a victory dance when she told Merlyn off and promised that she would never again be his daughter. As much as I appreciate Malcolm Merlyn as a character, and as much as Thea has frustrated me in the past, this particular scene has been a long time coming…and hopefully promises for some seriously interesting future interactions between Merlyn and Team Arrow.