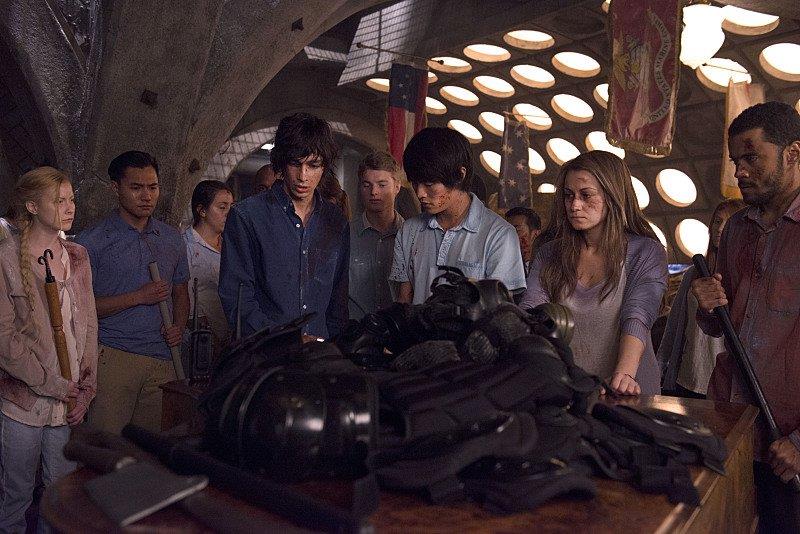 Every episode of The 100 is more intense than the last. This is a show that doesn’t slow down, doesn’t pause. It just keeps building until the only logical conclusion is that everything blows up in your face. Sometimes literally. Last night’s episode, “Resurrection”, would have seemed more at home on HBO than the CW – the brief but brutal battle between the Mount Weather guards and the 47 could have been pulled from an episode of Game of Thrones. Sometimes we forget that these kids have already lived through war once, but after last night I don’t think any of us will forget it. Bellamy said, “War is coming,” but it’s fairly obvious that war is already there.

Last week, I said that the storyline will continue to get darker, and “Resurrection” is quite possibly one of the darkest episodes yet – which is odd, considering the hopeful tone of the title. The 47 occupied one of the lower levels of the Mount Weather facility, and successfully defended it against some of the guards, killing approximately ten of them using fire axes and weapons appropriated from those who died of radiation poisoning last week. I don’t compare things to Game of Thrones lightly, so trust me when I say that this sequence was amazing. We know so little about most of the delinquents, and the Mountain Men probably know even less. I like to think that Cage was surprised by the vehemence with which the kids fought back. Unfortunately, this means he will likely come at them with more force, so I hope they have a good plan.

One of the best bits about “Resurrection” is that we learned that not all of the residents of Mount Weather are evil! I’m pleased that we’re currently exploring the rest of the people who live in the mountain, because until now we’ve had limited interactions with them. It’s easy to forget that this is a community, and that just a few episodes ago Bellamy encountered a school. I like that we are getting to see more of what the regular people are like, because apparently these people formed a resistance group, and that’s fantastic! This also allows for more development of Maya, which is always a plus.

Points for the Finn mention, even though it broke my heart a little bit. I couldn’t help but notice the parallel between Bellamy not telling Jasper about Finn and Clarke lying to Bellamy about Octavia being in Tondc. 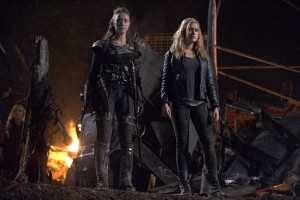 Speaking of Tondc, I apparently tend to judge too quickly. Last week I criticized Clarke for not fighting harder for what she believes is right. This week, she seems to be getting fed up with Lexa’s lessons and is once again beginning to resemble the person she was in season 1. I have said before that I believe we are headed for an inevitable schism between the 100 and the rest of the “Sky People”. Clarke is clearly going to emerge as the leader whenever that happens, so I hope she uses what she learned from the Ark and what she is currently observing from Lexa. She needs to be a leader who can make the necessary sacrifices to do what is best for her people, just hopefully not to the extent we have seen so far.

I love the scene between Abby and Kane. After the start those two had, it’s wonderful to see how much they obviously care about each other. Kane has come a long way since the early episodes, and I very much like that it was he who pointed out the similarities between how Clarke and Lexa didn’t warn Tondc about the missile attack and the decisions the Council made aboard the Ark. Their conversation led to a bit of a reconciliation between mother and daughter, wherein Abby appeared to slowly be accepting her daughter’s position in their new society.

I have notes about this episode that are basically just characters’ names followed by multiple exclamation points, and clearly I can’t talk about everything I want to, but let me briefly sum up a few other high points from “Resurrection”. I’m happy that Indra survived, and that she seems to have forgiven Lincoln. Octavia took charge and earned the respect of the other Grounder seconds. Jackson and Sinclair made rare appearances. Clarke shooting the sniper through Lincoln was incredible.

The endings of the past few episodes have sort of left me with a feeling of despair, and I’ve just been waiting for things to get worse. This is the first time in weeks where I have been hesitantly optimistic about the rest of the season. “Resurrection” was intense, but there were also some moments of hope – Grounders worked together with Sky People to save those trapped in the rubble, while Mount Weather residents risked their lives to shelter and hide the 47.

It will be interesting to see what happens when the cavalry arrives, so to speak, since Clarke seems determined to kill everyone in Mount Weather…yet we are now learning that not all of them deserve to die.