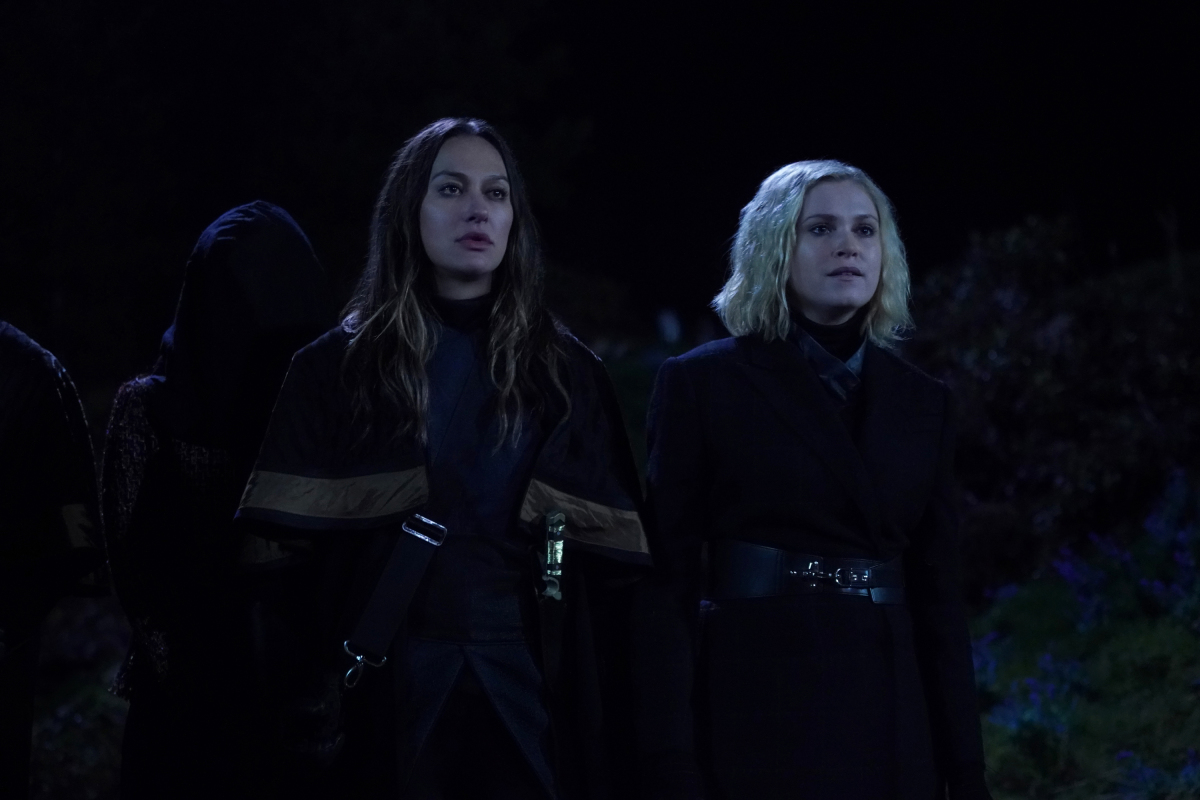 Wow, it’s been a while since I’ve enjoyed an episode of The 100 like that! “Adjustment Protocol” was a jam-packed episode, where a lot of stuff happened but there was still plenty of setup for next week’s season finale. It will be difficult to unpack everything that happened, but I’ll give it a try!

Things are falling apart in Sanctum in “Adjustment Protocol.” Russell is now convinced that the only way to regain the people’s faith is for all the Primes to ascend together, which sounds just as creepy and narcissistic as you would expect a cult leader to sound. But of course, not all of the Primes are able to be reborn – Josephine and Simone wiped four of the drives several episodes ago, which leaves Murphy and Emori pretending to be the Lee siblings in order to fool the people of Sanctum. And for all Russell looked down on Clarke and the rest of Skaikru, he doesn’t seem to mind a little genocide when it benefits him.

Clarke is playing the role of spy very well, or at least well enough to fool Russell and the others (even her own mother for a bit!). There were definitely a few moments where she sounded a little too much like Clarke, but Russell was either too emotional to realize or he’s an extremely good actor and is playing a massive long con. At this point, I’ve almost lost track of who knows it’s Clarke and who doesn’t. That said, I loved that our resident spy Echo was able to deduce that “Josephine” was really Clarke and that attacking was the right move at that time. I also loved the small moment between Clarke and Murphy at the end of the episode.

Gabriel is the worst, forgoing their plan to try and avert the ascension, thereby ensuring that everything fails spectacularly. When given the opportunity to kill Russell, he couldn’t do it, and by revealing his presence, they lost the distraction they needed to break into Sanctum and free the rest of Skaikru (most of whom are already free). Bellamy tries to give them their distraction by convincing Priya to tell the people of Sanctum the truth, which “forces” Russell to use the red toxin on the people the way Clarke and Gabriel didn’t want to. In the chaos, Delilah’s parents kill Priya. In true The 100 fashion, attempting to spare lives will likely end up costing more. “Adjustment Protocol” seems to emphasize that bad things are going to happen anyway so you should just jump to the worst option first.

We said goodbye to Abby. Many fans have been speculating that Abby would die this season; she has far outlived her usefulness, and after Kane’s death a few episodes ago, the writing was on the wall. It was telegraphed fairly heavily in this episode as well – Abby was able to reunite with Clarke and exchange “I love you’s,” she made up with Raven and declared her family, she gave doubting Jackson a pep talk, and she did what she could to spare Madi. Adding all of those together, it was pretty obvious that was her siren song. I’m not exactly sorry to see her go, but having her get overwritten by Simone is a special kind of cruel.

“Adjustment Protocol” very nicely set up next week’s finale. The Primes have taken hostages up to Skaikru’s ship, where a literal army is waiting for them. The only reason Indra didn’t kill them on site is because Gaia and Madi are in danger. I fully expect that next week’s episode is going to be a roller coaster, but I also suspect that we’ll be left with a cruel cliffhanger. (EP Jason Rothenberg has said as much before.) There is just too much left unanswered for everything to be wrapped up neatly in the one episode remaining this season.

Previous:Jovanka Vuckovic’s “Riot Girls” Gets Limited Theatrical Release This September
Next: “The Death and Return of Superman” Complete Film Collection Releasing This October!