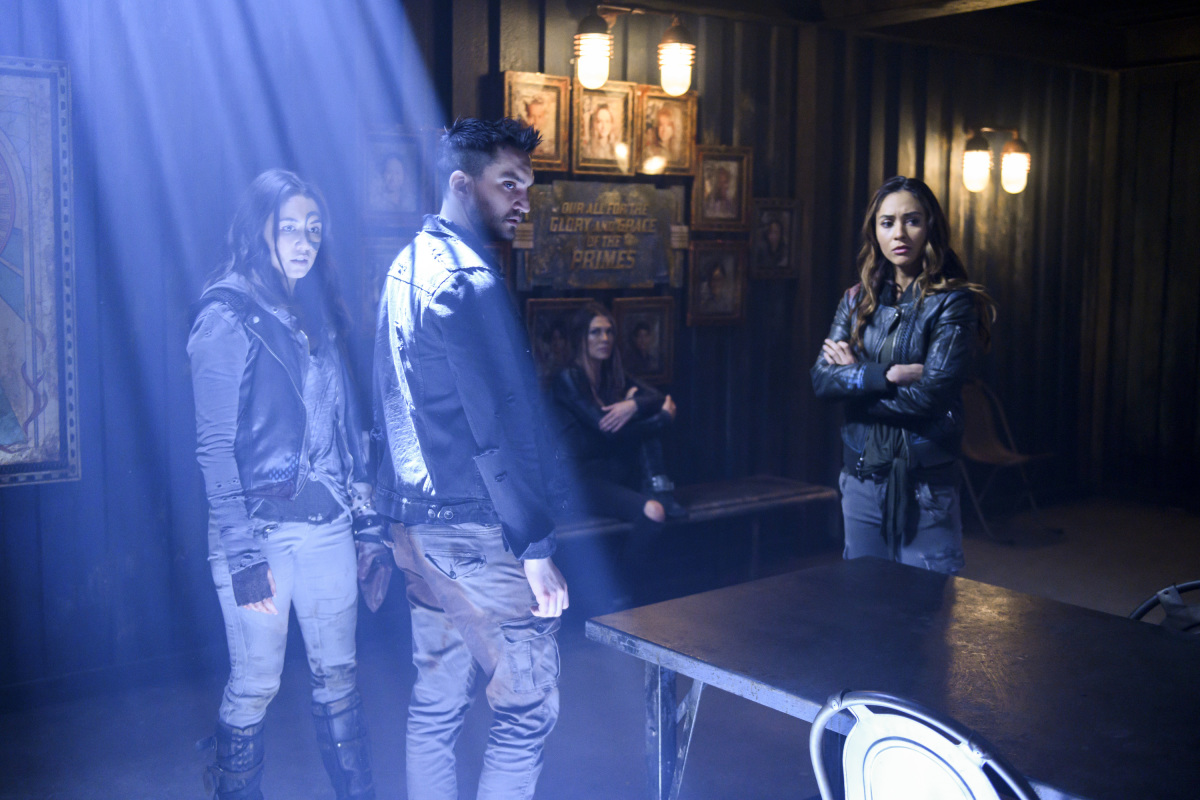 One thing that The 100 has always been good at is highlighting just how truly horrible human nature is. “Matryoshka” and “Ashes to Ashes” emphasize both the resourcefulness and brutality of a group of people pushed to the limit; both episodes also serve to prove that sometimes the best intentions lead to awful consequences.

Sanctum is no longer a paradise. “Matryoshka” shows how quickly a group will resort to violence when their way of life is threatened. Skaikru are to be executed for “their” crimes, even though most of them haven’t done anything wrong. It also showed how easy it is to spark a revolution. A few people were told the truth about Sanctum and the Primes and that was all it took for one of them to attempt a radical form of change; it’s a little disconcerting how simple it was to succumb to the pull of violence, but sometimes I feel like that’s the point of this show. 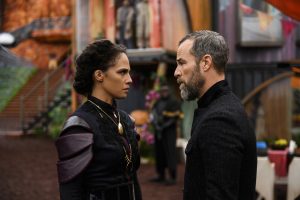 The brutality of the Primes isn’t something that should surprise me. After everything that we’ve learned about Josephine in the past few episodes, it makes sense that they’re all basically sociopaths. It would be difficult to be as long-lived as they are – albeit in different hosts – without losing some of your empathy. They’ve spent so long convincing the people of Sanctum that they’re gods that they’ve started to believe their own hype. Still, to learn that their preferred method of execution is burning someone at the stake is fairly shocking. That has to be one of the more painful ways to die, and for a society that claims to be enlightened, using medieval methods of execution just seems…wrong.

The hypocrisy in “Matryoshka” is also quite blatant. Abby’s treatment of Murphy is borderline ridiculous, considering all the terrible decisions she’s made just in this season alone. But really, it’s the Primes who take the cake for Hypocrites of the Year. As I said, they’ve started believing their own hype. They seem to truly believe their actions are in the best interests of everyone, and they don’t seem to realize they’re acting only for themselves. They’ve shown that they’re petty and vindictive – Simone tells Abby that Clarke is dead just to twist the knife – and they don’t care about the people of Sanctum at all.

A note about Murphy: I knew he would make the right decision eventually. I think he took the conversation with Raven to heart and this may be a really great turning point for his character.

“Matryoshka” also showed the indomitable spirit of humanity. The scenes with Clarke and Josephine as they struggled to survive against a brain that was breaking down were pretty spectacular – not to mention Bellamy’s sheer dogged determination to just not let Clarke die. I like the fact that no one on Skaikru ever wants to give up; I think that’s what makes them such compelling protagonists.

It bothered me a bit that this episode used the “Eureka Moment” trope not once but three times but I suppose we can forgive it because this season is honestly getting better.

Also, I’m tired of this whole Sheidheda plot. In a season full of so many different plot threads, this one is just entirely unnecessary; it’s taking time away from other stories and tossing in unneeded angst. I could understand perhaps dropping bread crumbs for a Sheidheda arc in season 7, but it makes season 6 just a little too full.

“Ashes to Ashes” is about hope as much as “Matryoshka” was about desperation. Here we have a trio of people – Clarke, Octavia, and Gabriel – who are trying to do better whose hands are being forced to resort to violence when they don’t want to be. It was smart of Bellamy to think that quickly on his feet and concoct the story of the bomb, but Clarke and Gabriel found a way to achieve the same goal with minimal loss of human life. “For Monty” will surely become the new Skaikru rallying cry when faced with such a decision in the future. 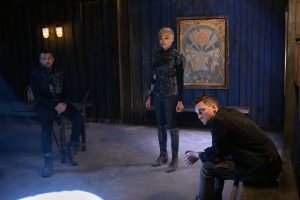 It makes sense in a way that “Ashes to Ashes” was directed by Bob Morley; it was an episode with a lot of talking and a heavy focus on character interactions – characters who we’ve rarely seen interact (like Miller and Gaia) and characters who haven’t interacted much this season (like Bellamy and Octavia). The characters are what make the show, and many of them have been sidelined this season as we’ve had to introduce a whole bunch of new people. I particularly enjoyed the little moment with Miller and Gaia, where we learn that Miller is still struggling to deal with his actions in the bunker. However, I found the scene between Bellamy and Octavia to be a little forced, but I suppose that’s partially due to Bellamy not really knowing how to reconcile his image of the way his sister used to be with who his sister has become. 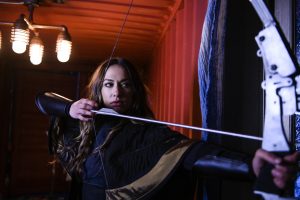 I’ve waffled on Echo as a character for a while. I liked her very much when she was first introduced, and I continued to like her as an antagonist in Azgeda, but I balked heavily at her becoming Bellamy’s love interest mostly because we didn’t get to see the relationship develop naturally. (I hate time skips.) She shines best when she’s her own person and not an extension of Bellamy, which is why she was so great in these two episodes. Her backstory was a nice piece of information that feels very odd being introduced so late in the series – especially as she’s never told anyone, and she’s been dating Bellamy for years at this point. Her lack of hesitation in killing Ryker was stone cold, but completely necessary and totally in character for her. One life to save all the others, yes?

On a related note, I’m coming around to the theory that they made Echo a Nightblood to have her become Commander as an alternative to Madi, who has been shown to be incapable of handling the Flame. There isn’t a whole lot to support this theory other than Gaia’s reaction and assuming that they didn’t just choose Echo to be a host for the fun of it.

Resourcefulness is the name of the game in “Ashes to Ashes”. Clarke is now Clarke pretending to be Josephine, and I’m not sure how long she’ll be able to keep that up. Aside from the fact that Madi is out for blood, there was a moment where she grabbed the syringe when it looked like Russell had caught on. He seems to be buying her act for now, though. Also, count me down for believing Murphy knows that this is really Clarke – Bellamy and Octavia were both there, so surely he has to know something is up.

With only two episodes left, “Matryoshka” and “Ashes to Ashes” still leave us with a lot of lingering questions. Is Diyoza really dead? Is Josephine really dead? How is Jordan doing? What is the deal with the anomaly? How many people did that janitor tell before he “killed” Simone? I’m starting to suspect we may be in for a doozy of a cliffhanger in the season finale.

Previous:“Zumba Burn it Up!” Rhythm and Fitness Game Coming to Nintendo Switch This November
Next: Dark Age Draws Readers Even Deeper into the Red Rising World