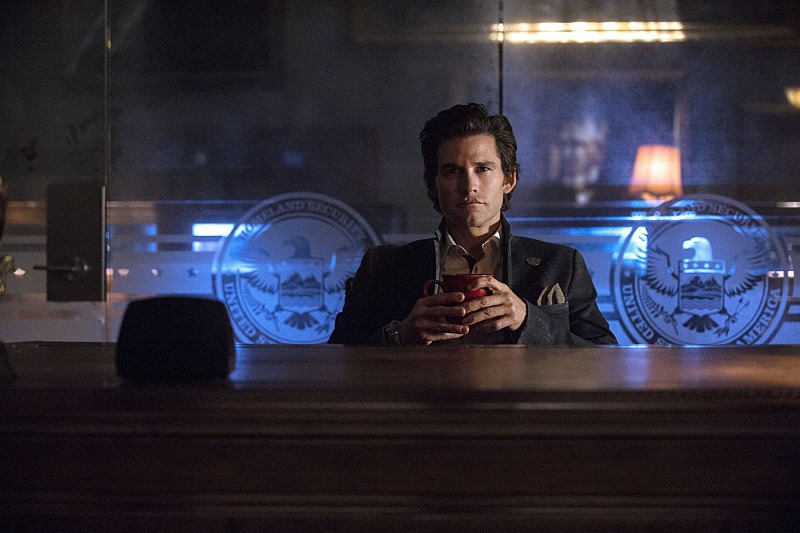 The 100 has never been a show to pull punches, and this week’s episode was no exception. You knew that it was going to be tense right from the beginning, thanks to a well-edited and brutal opening sequence showing what became of Bellamy in Mount Weather. In true The 100 fashion, it didn’t let up from there. With the battle for Mount Weather officially underway, there were enough moments of suspense in “Coup de Grâce” to keep you on the edge of your seat for the entire hour. 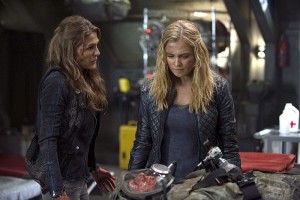 A coup de grâce is a death blow, either literal or figurative, that ends someone’s suffering. It’s meant to be a mercy, though very little about this episode was merciful, as both Cage and Clarke effectively seized power from their parents. It shouldn’t have come as a surprise to anyone that they did this, though I wasn’t expecting it to happen so soon. These actions speak volumes both about the parents and their children. Clarke offered her mother a choice, while Cage did not. Abby reluctantly acknowledged Clarke’s leadership, while Dante was forcibly imprisoned. We know by now not to count Abby out, but with Dante effectively neutralized, we don’t know what to expect from him. We don’t yet know what he’s capable of.

It’s difficult to ignore the similarities between what Cage is doing and what the Council did aboard the Ark. Yet something about Cage strikes me as darker than that. Dante and Abby are similar in that they want humanity to be worth saving. I hope the parallels end there; I wouldn’t want Clarke to turn into the cold, calculating politician that we see in Cage.

This episode brought forth an underlying issue that some of the members of the 100 have been dealing with all season – what is their place now that the rest of the Ark is on the ground? Clarke told Raven that she didn’t know what her job was. I suspect that her taking charge at the end of the episode was her way of regaining some sense of purpose and that we may be headed for a full-blown schism between the Ark and the 100. Only time will tell.

While we’re still sort of on the subject, I’m glad that there is some lingering tension between Raven and Clarke. It bothered me how little we got to see of Raven’s grief over Finn’s death, so I like that Raven is clearly still hurting over what happened. On a show where death is a frequent occurrence that can often be easily dismissed (for example, I can’t help but notice people seem to have forgotten Byrne’s existence already), it’s nice to see that they don’t forget about all of the people they lose.

I will admit that I didn’t start to like Maya until she told Monty and Jasper the truth, but she truly proved herself in this week’s episode. Her quick thinking and determination got Bellamy not only out of the harvest room, but to the hidden radio so that he could contact the Ark. She doesn’t have the brutality that the members of the 100 do, but that’s okay because she doesn’t need it. She’s risking enough just by doing what she’s been doing, and she’s getting better every episode because of it. I really like the character she’s becoming. 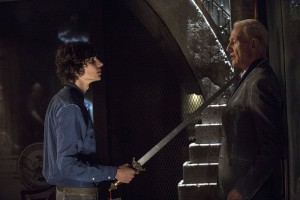 Jasper also performed admirably. He seems to have redeveloped the spine that disappeared after they were brought to Mount Weather. Apparently all it takes is his best friend being kidnapped (again) and Jasper turns into a surprise swordsman. Sure, he was beaten by an old man, but it’s all about the effort. I hope Jasper continues to grow into the leadership position he seems to be taking. I do worry that now that Bellamy is “on the inside”, the supporting characters who had been able to flourish on their own will be quietly pushed to the periphery.

Can we talk about Bellamy, though? The way he dispatched the guard in the harvest room, then turned to make sure that Maya was all right? And if it didn’t tug at your heartstrings when he learned that the kid he spoke to was the son of the man that he’d just killed, then I don’t want to know you. Bellamy has come a long way since the pilot. I’ve said it before, but I honestly do believe he’s had some of the best character development ever.

Sadly this episode didn’t feature Octavia very much, though her transformation into warrior princess is solidly underway. Even more sadly, we didn’t see Lexa at all – there was only a mention that she must be warned. It leads me to wonder what Clarke was doing before the assassination attempt. Was she simply out for a ride? Was she on her way back to Camp Jaha from the Grounders’ camp? Is this all part of the plan? Sometimes The 100 just doesn’t mention things, and it can be very frustrating. (Like, are people wondering where Jaha and Murphy are? And they took a group of people with them, too, how has no one mentioned that?)

Overall, I really enjoyed this episode. It’s laying the groundwork for future episodes and hinting at possible things to come. It was painful to watch, but I think that’s a good sign. It was hard to watch these characters I love so much be forced to resort to these actions, but at the same time, I’ve come to expect nothing less from them.

P.S. The awesome Grounder who helped Bellamy kill the guard is called Echo, and I seriously hope we see more of her.