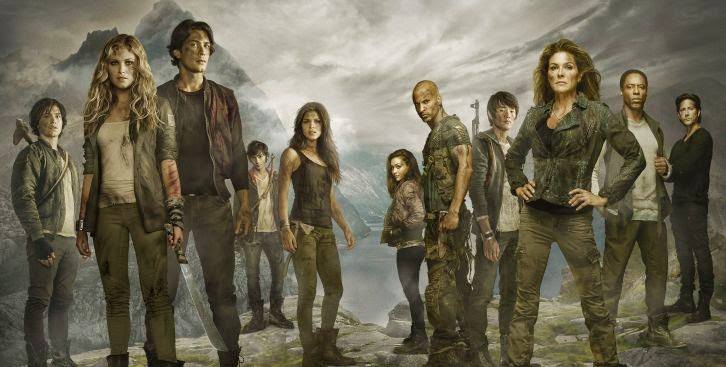 In a post-apocalyptic future, to escape Earth’s nuclear holocaust, humanity has retreated to a great space station called the Ark. With limited resources available, any crime committed on the Ark, no matter how minor, is punishable by death – unless the perpetrator is under 18. Now the Ark is failing, and time is running out, so the Council decides to send 100 juvenile delinquents back to Earth to see if it inhabitable. The kids are sent down with no supplies and one instruction: survive. This is the premise of CW’s The 100.

Here there be spoilers for all aired episodes (up to 2×10), so proceed with caution.

I unashamedly love this show. Sure, sometimes I wonder how a group of kids who were in prison look so healthy and well-groomed (answer: it’s The CW). More than once I have found myself thinking about how it’s amazing that no one has gotten pregnant yet, considering there has been no mention of birth control. And if the current society is an amalgamation of twelve nations, why are there still so many white people and no accents? How does Octavia have such great social skills for someone who spent most of her childhood hiding under the floor? Why does Jasper have those goggles? For the most part, though, I am able to focus on what the show does right – namely the character development and the relationships. 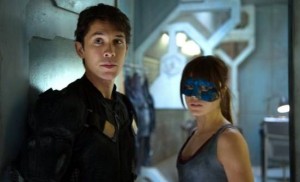 If you want good character development, look no further than Bellamy. Bellamy is the epitome of the “bad boy but a good man” trope. Everything he has done has been to protect his sister Octavia, including the attempted murder that got him on the dropship in the first place. He starts the series as a major douchebag, convincing the kids to let the Ark think they’re dead so that he won’t get arrested (and possibly executed) for his crime. Eventually, he evolves into a leader willing to sacrifice himself to save his people. Compare that with peacemaker Finn, who has sort of the opposite journey. Finn is painted as the good guy, yet he lied to Clarke and cheated on Raven, and in his obsession to rescue Clarke, he massacred eighteen people and doesn’t even seem to feel guilty about it. (I am still upset that so many people were willing to ignore his actions.)

Looking for some good relationships? The 100 has those in spades. Not just romantic relationships (and thankfully there’s only one love triangle that isn’t really a love triangle – this is the CW, after all), but all of them. On the Ark, with so little food and oxygen, it was against the law to have more than one child, so the relationship between siblings Bellamy and Octavia is completely unique in that world. We also get to explore the relationship between Clarke and her mother, Abby – both of whom thought the other was dead – as they try to ignore the tiny, insignificant detail that it’s Abby’s fault Clarke’s father was executed. 2×10 introduced us to a relationship I didn’t even know I wanted to see – Jaha (former Chancellor of the Ark) and Murphy (one of the delinquents) as they left with a group of, for lack of a better word, cultists trying to find the mythical City of Light. 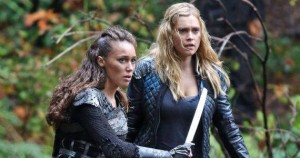 The 100 is one of the most feminist shows currently on television. It could still stand to work on other aspects of its diversity (for example, only one of the characters is canonically queer, information which was not revealed until episode 2×09), but it shines in its treatment of female characters. Most of the leaders in The 100 are women, with the exception of Mount Weather, which has to suffer only having a woman be their head doctor instead. Clarke emerges in the pilot as a force to be reckoned with, Octavia is well on her way to being a warrior princess, they would all be dead if not for Raven’s mechanical genius, and Abby has fallen from grace and battled her way back so many times it’s bordering on ridiculous.

Season 2 especially has been fabulous for the ladies. In addition to expanding the roles of the already stellar group of female characters, each with their own particular skill and purpose, we are also introduced to Byrne, the head of the Ark’s guard, and Maya, the only resident of Mount Weather trying to help the trapped delinquents. The commander of the Grounder forces (Lexa) is a woman, and her number one general (Indra) is also a woman. This helps soothe but does not completely eradicate the burn caused by the death of Grounder general Anya, who helped Clarke escape from Mount Weather.

Clarke is by far one of the best characters, though I must admit I’m a little worried about her arc this season. I love that she is being recognized as a leader not only by the Grounders but also by the Ark, but I fear that her decision to wall off her heart will lead to devastating consequences. I didn’t really like that so much of the focus after Finn’s death was on Clarke’s grief and not Raven’s. (Yes, Clarke did kill Finn, but Raven knew him for most of her life and ignoring her grief robbed us of the chance to develop her character more.) Also, I feel that the 47 in Mount Weather have sanctified her too much and become too reliant on her to help them escape. “What Would Clarke Do?” is a cute mantra, but Clarke is just barely 18 and shouldn’t have to have all of the answers. I am waiting for the end of the season to reserve judgment, because I hope that there is method to the madness and all my worries will be for naught. 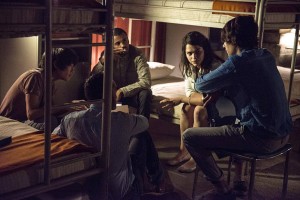 Speaking of those being held in Mount Weather, the split narrative allows some of the supporting characters to take center stage. While Bellamy and Clarke struggle to rescue their friends, characters like Jasper, Monty, Harper, and Miller have stepped up to fill the void left by the absence of their leaders. I was extremely pleased when they stopped waiting for Clarke and took responsibility for their own fates, remembering that they are all delinquents and don’t need Clarke to break the rules. In addition to allowing the development of some previously underutilized characters (there will never be enough Monty), this helps highlight the diversity of the cast. Sure, there are still a lot of white people, but in their defense, most of the white people are women.

According to a Twitter chat with Jason Rothenberg, the creator and executive producer of The 100, the world in which they live doesn’t believe in binary sexuality. People love who they love. This has yet to fully come across on screen – with the main exception being Lexa – but considering how receptive the Powers That Be seem to be to fan feedback and criticism, hopefully the revelation about Lexa is the first of many. I know there are some fans who are looking to existing, supposedly platonic relationships to change into something more. It’s nice to know that the possibility exists and is something they are apparently seriously considering. 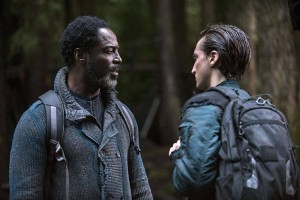 The 100 deals with quite a few emotional and ethical issues as well. The conflicts that arise from these issues form the crux of the narrative. The 100 is an exploration of human nature. It puts its characters in a survival situation and asks hypothetical questions. What would we do to keep the human race alive? What would we do to spare our loved ones terrible pain? Would we be willing to sacrifice ourselves to save others? Would you risk everything for the chance at a better life, one that may not exist? Over the course of two seasons, The 100 has dealt with torture, human experimentation, capital punishment, murder, and war – but it also deals with things like love and loss and friendship. Characters get second chances and redemption arcs, but they also must face the consequences of their actions, including seeing other people hurt because of their decisions. No one is without fault. No one is free from criticism.

Basically, The 100 has everything. If you’re not watching it, you’re missing a show with diversity, representation, a compelling plot, great characters, and well-written relationships. Thankfully, it has already been renewed for a third season, but think of the possibilities a show like this could have with an even bigger audience. If you’re not watching, consider starting, and if you are watching, force everyone and your grandmother to watch it. While it may not be for everyone (very few things are), I’m sure there are a lot of people who would love it if they only gave it a chance.

The 100 airs Wednesday nights at 9pm on the CW.

TOPICS the 100The CW