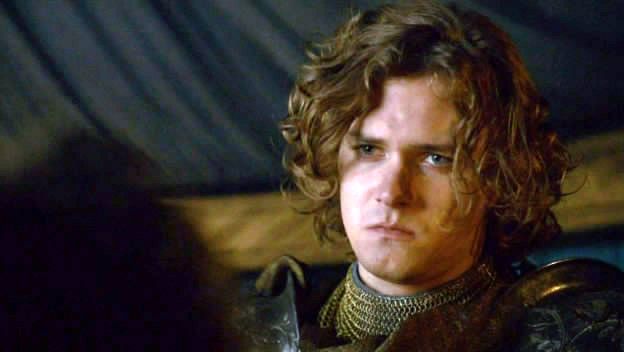 WARNINGS:
The following article contains spoilers through the fifth book in George R. R. Martin’s Song of Ice & Fire series (A Dance with Dragons) and through season four of HBO’s Game of Thrones. Additionally, there is some *minor* speculation regarding the future of a supporting character.

Dear Geekiary,
I have a question about Game of Thrones – the TV show and the books. I haven’t read the books, but I heard that Loras battles Stannis to take Lord Renly’s revenge, and gets injured in the process. I wanted to ask, why do you think the TV show hasn’t shown that side of Loras yet? Is it not time in TV show canon? Why hasn’t he done anything yet if he indeed went to war for Renly against Stannis in the books?

Well Anon, there are a couple different ways I can answer your question. The short version is no, it’s not yet time in TV show canon. In the novels, Loras Tyrell’s assault on Dragonstone is first mentioned in A Feast for Crows – a story line that the show is just beginning to explore in season five, as it happens quite a while after Stannis has left his seat to sail north and assist the Night’s Watch. (As a reference, we saw Stannis arrive at The Wall to help battle the wildlings in season 4, episode 9.)

I think it’s important to mention that in the books, Loras actually doesn’t go to fight Stannis directly – as I said, Loras goes to Dragonstone to take the castle; he knows that Stannis is long gone from that place. We also don’t “see” Loras’s attack and subsequent injuries firsthand; the tale is relayed to readers via Cersei, who hears the news from one of her [assumed] minions. So while I may not subscribe to them, theories do exist that Loras’s condition was exaggerated one way or the other (as in, he’s actually dead; or on the other hand, he’s alive and well, perhaps only mildly injured).

The long version, if you’re interested, involves a bit more speculation and quite a few more spoilers.

Basically, at this point in time readers don’t really know what’s going on with Loras. He stormed Dragonstone, he was gravely injured “by quarrels, maces, and burning oil”, and Cersei heard that Loras was actually dying of his wounds. But why did he go to Dragonstone in the first place? Well, yeah, he was still seeking revenge against Stannis for Renly’s death, but Stannis isn’t at Dragonstone. In fact, that island was most recently under siege from Paxter Redwyne’s fleet… but Redwyne had been begging to return to the Reach to defend it from the reaving Ironborn.

Cersei actually leveraged Paxter Redwyne’s request with Loras Tyrell’s desire for revenge and his recklessness to manipulate Loras into making for Dragonstone. (And yes, I’m sure it helped that Highgarden is in the Reach, so Loras knew that he was also basically helping out his family by taking this task of assaulting Dragonstone from Redwyne.)

Unfortunately, Game of Thrones has all but cut the Ironborn story – at least for now – and other than passing mentions of the Arbor and its wine, the show hasn’t put any time into introducing the Redwynes. Meanwhile, the writers have beaten Loras Tyrell’s storyline into their version of submission, making the character into barely more than a pretty face who gets thrown out as a match for any single woman in need of a husband, no matter how unfitting that woman may be for him ::cough::Cersei::cough:: 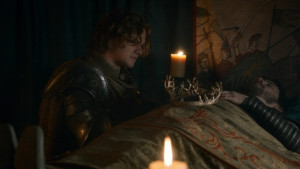 Could I see show!Loras popping in on Dragonstone to gain some glory and notoriety? Absolutely. But I feel that at this point, if the show writers send him there at all it would be practically nonsensical for his reasoning to be avenging Renly’s death. We’re talking about a character who, in the novels, mourns his dead lover and insists that “When the sun has set, no candle can replace it”. Loras joins the Kingsguard because he loved Renly so much that he can’t imagine being with anyone else; “taking the white” is an honorable way for him to live out his life (and the chance to protect his sister when she becomes Queen is of course an added bonus). 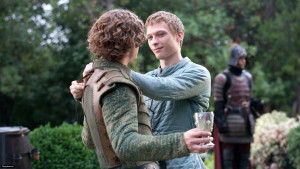 In HBO’s Game of Thrones, however, Renly is barely cold in his grave before Loras is off having trysts with other men – and giving away important, secret information in the process. Yeah, book!Loras may be reckless, even a bit hot-headed at times (burning oil pun, anyone?)… but I think even he would shudder to see what the show has done to his character.

1 thought on “Dear Geekiary: I have a question about Game of Thrones…”