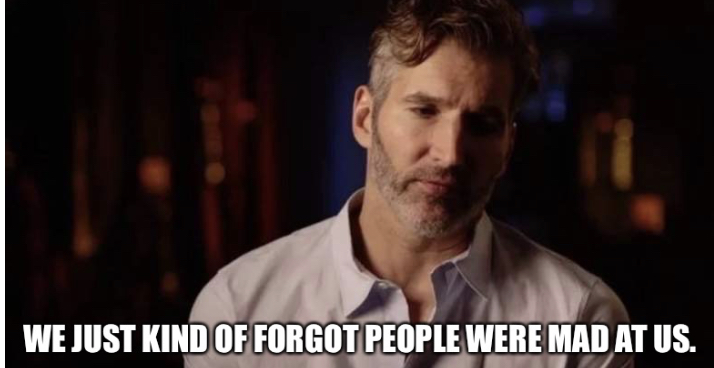 Game of Thrones showrunners David Benioff and D. B. Weiss, known as ‘D&D’ to fans, are having an absolutely terrible, horrible, and very bad week.

It all started Saturday at the Austin Film Festival, where Benioff and Weiss were giving a panel about their experiences as screenwriters. The duo has notoriously laid low after the final season of Game of Thrones, pulling out of the official SDCC panel just days before the con. In one interview, they were quoted as saying their plan for the finale was to be “very drunk and very far from the Internet.” So their presence at this panel was notable to begin with simply for coming out into the world and interacting with the public.

Perhaps they thought enough time had passed from the finale just four months ago that the fandom ire would have waned a bit. Perhaps they’d remained so isolated they weren’t aware of just how much ire the final season got, or they possibly didn’t think a crowd of prospective filmmakers would live-tweet the whole affair since they were ostensibly filmmakers and not a ‘fan’ audience. Thankfully, Twitter user @ForArya was there to give us a play by play of events. And boy, it was a mess.

I guess they just sort of forgot people were mad at them.

The entire thread begins here, and it’s worth scrolling through the entire thing to see how poorly they read the room. In some situations, a self-deprecating attitude could have played off nicely. Struggling writers could find inspiration when seeing successful writers exhibit some of the same sort of impostor syndrome that they have. If these wildly successful people had self-doubts, maybe I, too, can be successful!

But Benioff and Weiss are the wrong people to play the self-deprecation angle. In the eyes of many fans, they ran an extraordinarily successful series into the ground at the end with rushed and sloppy writing. Hearing that they had no idea what they were doing from the start, but were given an insanely large budget and handed the keys to a prolific writer’s life work didn’t sit well with the audience. The increasingly pointed questions about their process and lack of perspective during the panel highlight just how upsetting their answers were to those in attendance.

Even more shocking, they admitted to not having a writer’s room, which explains so SO much about the series. Women in the panel were particularly vocal about the lack of perspective for the scripts due to this oversight, but Benioff and Weiss seemed to brush off the criticism and make excuses for this decision. They stated that they made being on set during the difficult shoots a requirement for writers, which apparently turned a lot of writers off from joining them. It seems like an intentional move on their part to shut down collaboration, despite HBO encouraging them to do so.

Word about this panel spread quickly across the Internet, reaffirming many fans’ belief that the writing was a crucial problem with the series, and that this deficit was largely covered up by the incredible acting, design, and music. We suspected this, but now it’s confirmed.

But Game of Thrones is over, and the notorious duo has moved on to Star Wars. What’s done is done. It’s time for another fandom to deal with their horrific incompetence.

Late Monday night news came out that Benioff and Weiss were no longer attached to the upcoming Star Wars trilogy. The phrasing of this announcement was very careful to avoid framing it as though they were fired, so I’m going to just quote the first source that began reporting on this for context. The announcement came via Deadline:

Benioff and Weiss were supposed to usher in the post-Skywalker era of the Star Wars brand with a 2022 new-start story that would stake out a new frontier for the era-defining cinema brand created by George Lucas. The Emmy-winning pair cited their historic deal with Netflix. They said their enthusiasm for Star Wars remains boundless but, regrettably, their schedule is full.

So the official line is that they were too busy with Netflix to do Star Wars.

This could very well be true. There are a number of reasons that they would choose to dump the highly popular franchise in favor of Netflix. Perhaps Netflix is paying them more. I’ve seen their deal reported to be around $250 million with Netflix, but I couldn’t find any quotes about how much Disney was paying them for Star Wars. Perhaps they just aren’t a fan of genre projects overall. Their Austin Film Festival panel seemed to pointedly make note that they wanted to minimize the fantasy elements of Game of Thrones to be more appealing to a larger audience.

But as believable as either of these reasons may be for why they chose Netflix over Star Wars, fans are still going to speculate that there may be a deeper and more drama-filled reason for the split. Back in May, I wrote an article pleading with Disney to save us from D&D’s take on Star Wars and, while I’m certain Disney didn’t see my particular article, I wasn’t alone in this sentiment. Maybe someone with more influence had their voices heard by those with power over at Disney, resulting in the split we see today. Their writing was horrifically sloppy during the last season and I’m certain Disney noticed the backlash against it even if they didn’t outright agree that it was terrible.

Other fans speculate that Saturday’s panel may have set this off and, while I find that idea hilarious, I’m not sure things can move that quickly. They likely already signed contracts (though some news outlets speculate it could have just been a handshake deal) when the announcement was made, and Disney lawyers would likely have to pick through them to make sure the split wouldn’t result in any nasty lawsuits that Disney could lose. I think two days is a bit too quick for something like that to happen. But still, I do enjoy this theory regardless of how plausible it is. Imagine if some random person live-tweeting their terrible panel led to them being axed from one of the most prestigious contracts a writer could get in just two days’ time? Hilarious.

At the end of the day, they won’t be taking part in one of the biggest franchises in modern cinema. Whether it was their choice or not, that’s just the facts. Now D&D can focus full time on whatever mysterious Netflix thing is coming down the pipeline. And besides, their legacy will live on over at HBO with all those new spin-offs…

One of the new spin-offs, a series focusing on the Long Night, has been axed. In a way, this one makes me sad. I was looking forward to this part of Westerosi history being explored, especially with someone other than D&D at the helm. While the casting left much to be desired, I was nonetheless excited to see it play out. However, this is still a bit of a blow to Benioff and Weiss’ legacy. This particular spin-off was much further along than most (it was the first to make it into production), yet it got kicked to the curb anyway.

What about the other spin-offs? Will they meet a similar fate? Will D&D lose all opportunities to brag about how they were the showrunners of the original Game of Thrones, which sparked a ton of spin-offs? In a way… I’m rooting against this one. I don’t care if they have bragging rights about spin-offs. I want more of this universe and I want them as far away from it as possible. This is a very bad day not just for their egos, but for me as a fan of the world as well.

I suppose that this week can’t be too terribly bad for them if you step back and look at the larger picture. At the end of the day, they are both millionaires and still have a nine-digit deal with Netflix. They have also been very pointed about avoiding online feedback (just see that thread from ForArya linked earlier in the article), so their egos may escape this unscathed. But still, it’s a nice bit of schadenfreude for fans who felt that incompetence was being rewarded.

At the very least, they can’t mess up Star Wars and had to face criticism in person. So for fans who have been stewing with anger for months after the catastrophe that was Season 8, it has been fabulous, incredible, super good, very awesome week.

Previous:“Batwoman” 1×4 Review: ‘Who Are You?”
Next: “Dead by Daylight: Nightmare Edition” Featuring ‘Stranger Things’ Gets December Retail Release!