The Gaslighting of Game of Thrones Critics 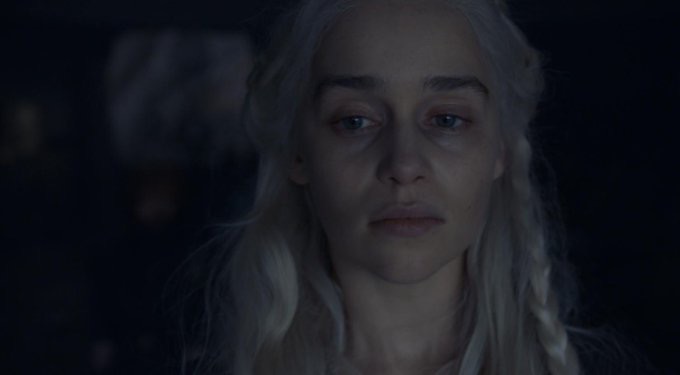 Game of Thrones critics have been getting a strange sort of pushback from their fellow fans that are enjoying how season 8 is playing out.  The pushback is comparable to gaslighting.

The points of contention regarding season 8 are plentiful from us Game of Thrones critics. I’ve written about the logical flaws of the season as well as the character assassination. Many others have written their own pieces highlighting the writing issues, both objective and subjective, and backed up their points with canon facts and film theory to strengthen their argument. And yet, somehow, people are ignoring these criticisms. They say we just don’t like that our favorite character won’t get the throne or accuse us of not paying attention. This is gaslighting, plain and simple.

Per Wikipedia, Gaslighting is defined as the following:

Gaslighting is a form of psychological manipulation that seeks to sow seeds of doubt in a targeted individual or in members of a targeted group, making them question their own memory, perception, and sanity. Using persistent denial, misdirection, contradiction, and lying, it attempts to destabilize the victim and delegitimize the victim’s belief.

Signs of gaslighting include:

The above point is one of the most common ways people have been challenging Game of Thrones critics.  A friend of mine recently posted an article that talked about how fans are upset with season 8, and a friend of theirs posted the following as a response:

Both my friend and I have been paying extremely close attention. They and their spouse are Game of Thrones cosplayers. I’ve written tens of thousands of words on the series, personally. We’ve both read the books and have had many in-depth discussions on it. And, most importantly, neither of us are under the assumption that we’ll get the ending that we wanted.

This same counter can be found in great volume on Twitter: 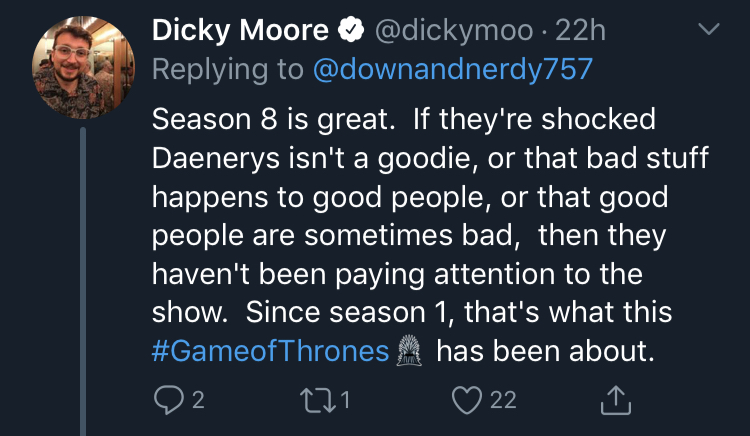 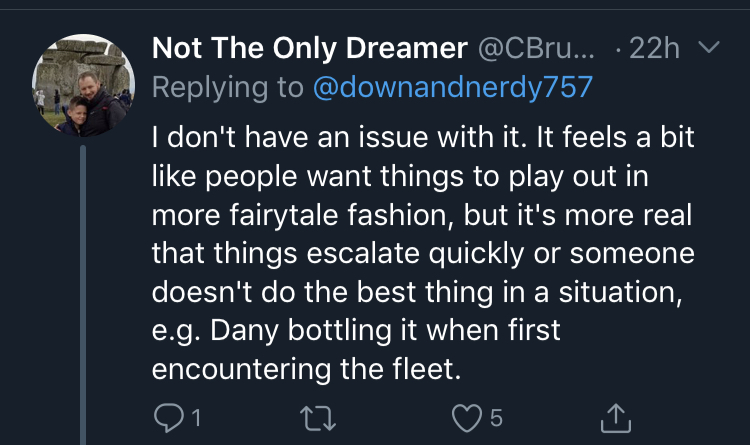 The same person in the point above discounted all the points we made. They didn’t even bother reading them. I know they didn’t read them because they responded way too fast to have absorbed the 2k+ word article I linked to. She posted this and vanished:

Another way people are discounting our information/arguments is by saying there are more important things to focus on, saying it’s “just a TV show” and we should do something better with our time. This in no way addresses the information, and it discounts any logical arguments we may have by stating that it doesn’t matter in the long run. The irony with this is that a lot of the people who present these arguments spend a great deal of time listening to podcasts and reading blogs just like we do, but we are the ones wasting our time, not them. 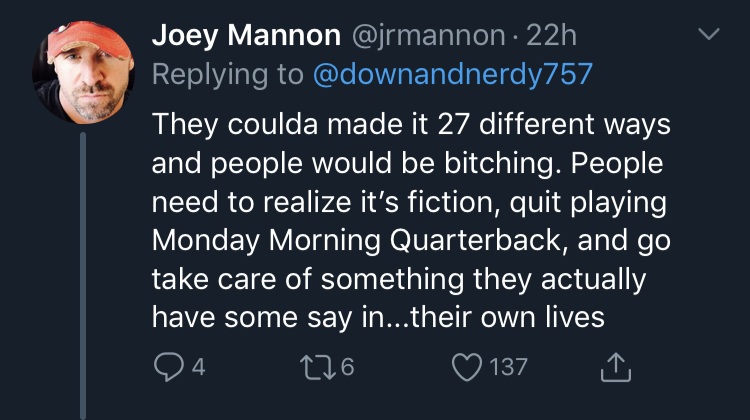 Verbal abuse, usually in the form of jokes

The verbal abuse against Game of Thrones critics is everywhere so it’s hard to pick out just one example. I just snagged this one picture from the sub r/NobodyWinsTheThrone (which is the team I’m actually on) that accuses people who are rooting for Daenerys of either supporting fascism or ignoring clues.

I’m on the team that this particular example came from, but I vehemently disagree. I’ve talked about the lack of supporting evidence for Daenerys’ turn already. Needless to say, I’m not defending fascism nor am I ignoring anything. I’ve laid out exactly why I think the clues for Mad Dany weren’t sufficient for the rapid speed in which she turned into a villain. Doesn’t matter, though. Like above, I must be ignoring things. Or I support fascism. 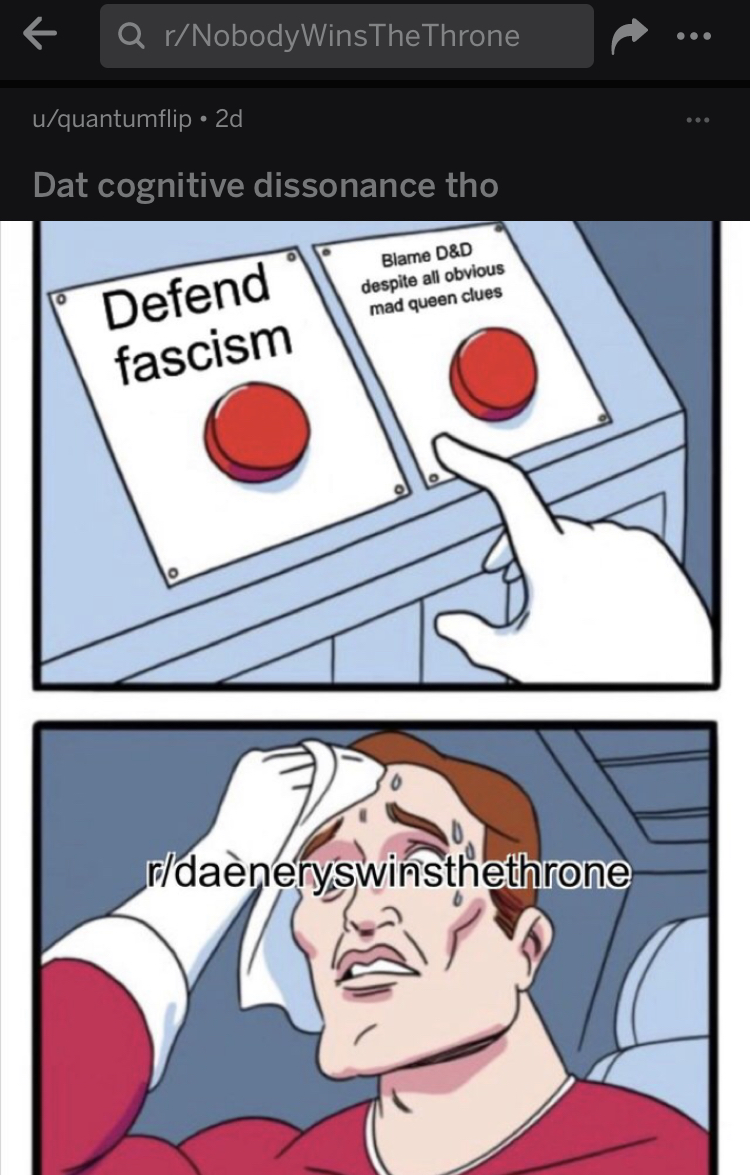 Trivializing the victim’s worth

A lot of us Game of Thrones critics have fairly diverse backgrounds when it comes to media criticism. Many of us have degrees in various media-related fields, run blogs or YouTube channels or Podcasts, have hosted panels on the topic, and participate in other fairly involved activities that highlight how serious we take this topic. And yet, as highlighted in two of the examples above, we are accused of not paying attention.

Another friend of mine, when I pointed out how involved I’ve been in critical analysis for the series and how my professional background relates to this type of criticism, sarcastically quipped that she’s proud of all of that, but proceeded to discount my credentials and loop back around to the “you aren’t paying attention” and “you just didn’t get your desired ending” accusations.

This has been so widespread you really only need to cruise some Game of Thrones subreddits for maybe five minutes to see this happening.  It doesn’t matter how qualified Game of Thrones critics are in regards to media analysis, our worth is called into question and we’re belittled.

Undermining victim by gradually weakening them and their thought process

I keep having “art is subjective” thrown at me over and over again. What’s really weird is that the opening line of one of my most critical articles is this:

Art is subjective, but logic is not. Game of Thrones season 8 has been objectively bad in regards to narrative logic and facts that we know about the fantasy world George RR Martin built for us.

Once I point that out, the goalposts get moved to something else, which I then refute. And then something else gets brought up and I refute that. And repeat, repeat, repeat. There is no end in sight. There is nothing I say that can convey my arguments because they don’t actually care about the arguments themselves, but just the fact that I have them in the first place.  And they will keep going until we’re too worn down to try anymore.

The other day, I spent a good four hours countering every single point until I was in tears. I was not in tears from the emotional toll that the show has put me under (though I’ve been there too), but I was in tears from the onslaught of attacks against the logical arguments I put forward only to have them ignored. The conversation moved onto something else that I then have to defend, which also results in that point being ignored. It’s been almost 24 hours since then and I’m still exhausted from it.

Us Game of Thrones critics are being gaslighted across the Internet. We’re being worn down, trivialized, made fun of, and have had our arguments completely ignored in favor of reframing our arguments in their favor. To those of you participating in this gaslighting, please recognize what you’re doing. We aren’t saying you can’t enjoy the show, but we are asking that you recognize that our criticisms are valid.  There are real flaws here. Liking flawed media is common, most of us do it, but it is undoubtedly flawed and we don’t deserve to be gaslighted like this.