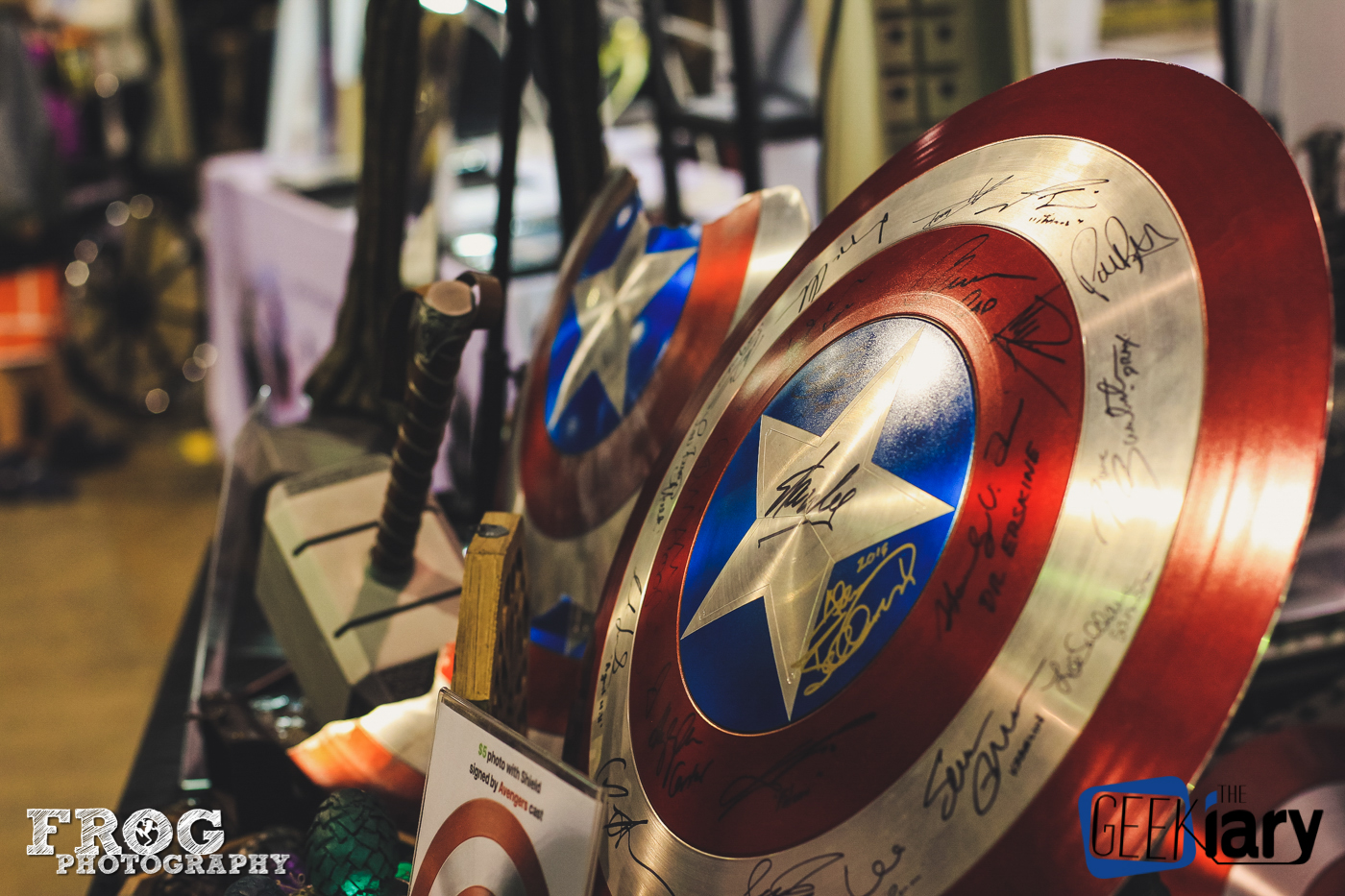 Mid-October, thousands of fellow geeks flew to Chicago, Illinois for the 2019 edition of Ace Comic Con Midwest to meet their favorite Marvel or Game of Thrones actors.

The line-up for the weekend was unprecedented. It’s unlike anything I have ever seen at convention before: Brie Larson (Captain Marvel), Chris Hemsworth (Thor), Tom Holland (Spider-Man), Jake Gyllenhaal (Spider-Man), Tessa Thompson (Thor Ragnarok), Gwendoline Christie (Game of Thrones), Kit Harington (Game of Thrones), Norman Reedus (The Walking Dead), Taron Egerton (Kingsman), Kiernan Shipka (Sabrina), and Ross Lynch (Sabrina). Usually, in order to see actors of this caliber, SDCC panels would be your only option and you’d have to line up 24 hours in advance for a chance to catch a glimpse of them in the enormous Hall H. Stephen Shamus and his team made this dream – because, really, who doesn’t dream of meeting Chris Hemsworth or Brie Larson – a possibility. This Midwest edition of Ace Comic Con saw 3 convention first-timers: Larson, Thompson, and Gyllenhaal. As expected, tickets for guests’ photo ops and autographs sold out within minutes of their release. 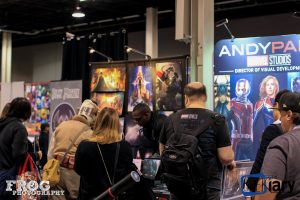 The organization of the con was pretty standard: a 3-day event with Friday being a shorter day with fewer guests to give attendees time to roam the exhibit hall and get used to the con layout. Attendees could pick their GA or VIP passes, wristbands and swag bags (for VIP only) ahead of the opening. To enter the convention, guests had to go through airport-style security portals to make sure both attendees and talent were safe. The floor was well laid out with enough space to walk around. Everything (photo op, panels, vendors, artists, activities) was in the same hall. The only thing I would improve is the queuing for panels: signage was missing and the long lines were running down the vendors’ area, blocking the flow from Artist Alley to the rest of the hall.

The vendors were pretty standard in my opinion. I didn’t buy anything that weekend, preferring to focus on Artist Alley. Ace Comic Con had a really good artist line up. Having invited celebrity guests whose characters exist in similar universes meant that artists could bring their more relevant works and sell more. I was really excited to meet Bosslogic, Brianne Garcia, and Andy Park, Marvel Studios’ Director of Visual Development. Meeting Andy is always a pleasure, and I made sure to pick his concept art for Black Widow and Wanda Vision. 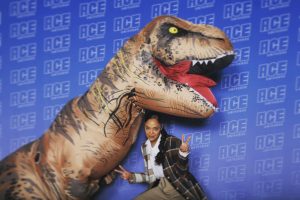 The photo ops and autographs had their own area within the exhibit hall. Celebs Ops was in charge of the photo ops. They are, along with Epic Photos, the best photo ops company out there, so I was very happy to see them at the con. As expected, they had a great organization and it was easy for all attendees to find out where to line up. Unlike most other companies, guests could download the HQ version of their op for free, which makes posting pictures directly to social media much faster. I had photo ops with Larson, Thompson, Hemsworth, Holland, and Gyllenhaal, and while there were some delays, everything ran smoothly and all of them happily posed with fans and seemed happy to be there. Shoutout to Tessa Thompson for losing it when she saw me arrive in my 2 meters-high dinosaur costume. 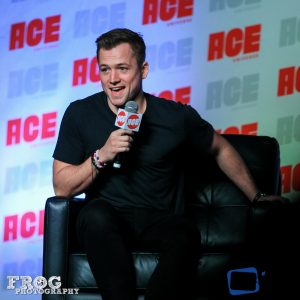 During the autographs, the talent was behind curtains. I was lucky enough to have scored a Brie Larson VIP back in early summer when she was announced, so I got to experience this set-up for the first time. I have to say, I quite enjoyed it. The encounter with the actor is a lot more intimate and feels less stressed/rushed. Despite being late, Larson still took the time to talk to every fan that had come to see her. Unfortunately, I got nervous and word-vomited for a good 2 minutes, so hopefully she’ll do another Ace convention and I can actually have a normal human conversation with her. Preferably one where I don’t internally face-palm when I remember it.

On Saturday, ops and autos were late, which delayed the panels in the afternoon. Some people complained, but, to be honest, anyone that has been to a convention knows that delays happen. All in all, I think everything got moved by about an hour, which is not too bad. Moreover, despite the delays every photo op and autograph ticket was honored. After the debacle that happened at the Walker Stalker convention last weekend, we can all appreciate the fact that no celebrity was over sold and every attendee got what they paid for every day.

All the guests had panels throughout the weekend. Entrance to the panels was included in the convention admission ticket so every attendee could get a glimpse of their favorite actor even if they could not secure or afford a photo or autograph. The panel section had enough room for everyone, and there 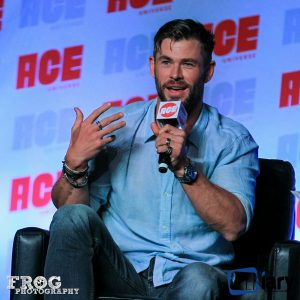 was a specific section for VIP ticket holders at the front of the stage. Ace Comic Con did not allow live audience questions for which I am grateful. Fans could send their questions ahead of time and the moderator chose some during the panel. To be honest, I like this format because 1. The moderators were A+ and knew their subject and 2. We avoided disasters like the time two fans insulted Anthony Mackie and Sebastian Stan at Ace Comic Con Seattle. While my favorite panels were the Brie Larson/Tessa Thompson and Gwendoline Christie panels, I was really surprised to see how funny and comfortable Chris Hemsworth was on stage. He’s got a great sense of humor. If you want to have a look, you can watch all the Ace Comic Con Midwest panels on the Ace Universe Facebook page.

One point that’s different from other cons: everyone working the Ace Comic Con is staff. There are no volunteers which, in my opinion, means more engagement as well as accountability. Both the Ace and Celebs Ops staff were great and worked hard to reduce photo ops/autographs conflicts all weekend. They also handed out water bottles in lines when sessions were delayed which was greatly appreciated by all of us. 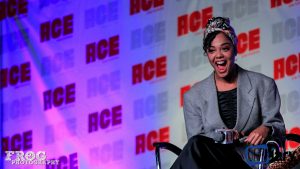 Ace Comic Con staff also differs in the sense that Stephen Shamus and his staff are quite active on social media, and they listen carefully to who people would like to meet. There is a Facebook group for attendees that Ace staff reads often. It’s a great resource for tips on how to score tickets, hotel recommendations, meet ups with other fans, announcements by Ace. They also developed an app where you can look up the schedule or the floor map.

Budget-wise, I am going to be honest, this is the most expensive convention I have ever attended. The admission ticket is fairly standard but booking such popular guests means that the price of the photo ops/autographs is higher than usual. To meet the top talent from Avengers, your wallet would get lighter by $550 for a VIP ticket (includes 3 days VIP admission, a photo, an autograph) or by $200 for a photo op or autograph. For the most popular actors, autograph tickets could only be won via a lottery system so if you really wanted to meet the actor, buying a VIP would be your best chance. I enjoyed the advantage of the VIP ticket: 30 mins early entrance, swag bag (one Funko pop, an Ace Comic Con blanket, avengers socks, picture holder, a pin, a travel tag, and hand sanitizer), 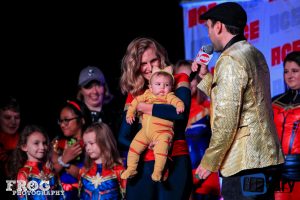 fewer lines, reserved seating at the front of the stage for the panel of the actor whose VIP you have.

Ace has not yet announced the location of their next convention so be on the lookout. I had a great time and I enjoy a well-organized convention, so I would definitely go to another Ace con. As it is very much a celebrity guests-oriented convention (unlike ECCC for example), the line up would have to be one I am ready to spend my dollars on. Judging by past Ace cons, I have no worry that Ace Comic Con can deliver.