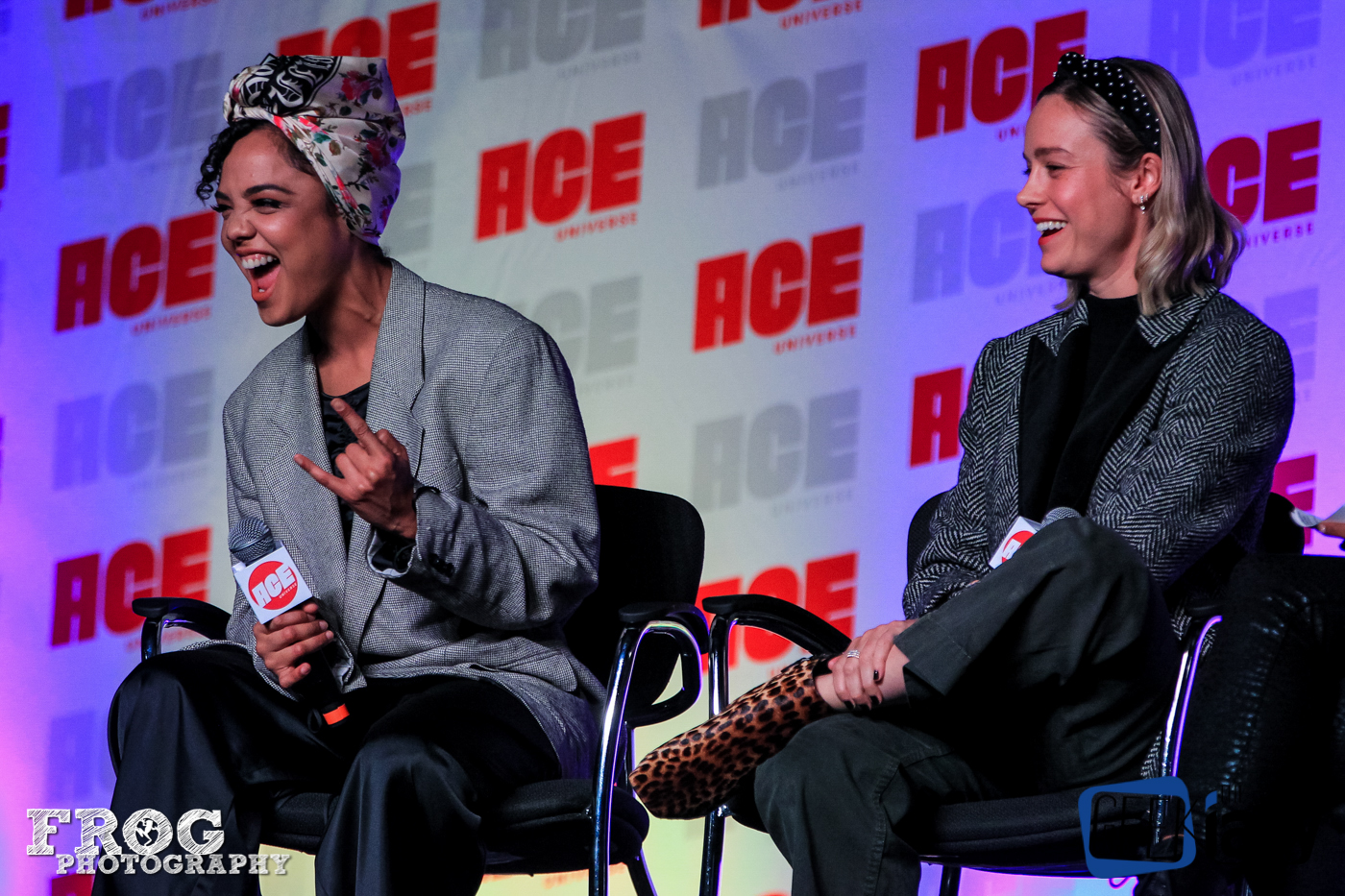 One of the most anticipated panels at Ace Comic Con Midwest last weekend was the “Conversation with Captain Marvel & Valkyrie”, respectively Brie Larson and Tessa Thompson.

Ace Comic Con Midwest was the first convention for both Larson and Thompson and they were both as delighted to be there as the attendees were to listen to them. Both were in great spirit, joking with each other and the audience. Below are several selected moments of their panel.

Their first words at the panel, setting up the tone for the next 30 minutes
Larson: We’re here to ship, y’all! [laugh] [referencing ValCarol, the ship for Captain Marvel & Valkyrie]
Thompson: Brie is my real life queen in general. If it becomes canon, that’s cool, too… [laugh]

On role models when they were growing up
Larson: Mine have always been pop stars. I love the divas so much.
Thompson: Prince and David Bowie. Basically anyone that dresses weird. Those are always my heroes, still are my heroes. 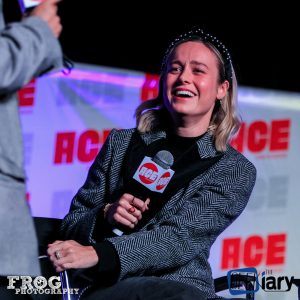 How their roles have impacted them personally or professionally (i.e. Thompson’s role in Creed having an disability)
Thompson: With Creed, I play a character that knows eventually she is going to lose a significant part of her hearing and I think, for me, it is something that I didn’t consider enough. I went through life with this idea that most people hear. If I want to say “excuse me” to someone that I’m behind, I would say “excuse me” just assuming that they would hear me. So that experience of working on that character made me just more curious about what people are going through in general. I feel like we live in a time where sometimes, we are not curious enough about the other and compassionate enough. I think that was something that that role helped me see in myself for sure.
Larson: There’re little pieces from every character that I have learned something from. Part of the beauty of getting to play these characters, it means you get very close to them. You get very close to the subject matter, so whether it was learning about foster care in Short Term 12 or learning about women that are kidnapped or abused from Room, female strength and Captain Marvel or right now, Just Mercy which tells more about our justice system and the racial imbalance that’s happening there. So there’s so much to learn, and it’s one of the things I love the most about our job, is that we get to learn.

On how it feels to be superheroes
Thompson: The thing that really makes any of these characters superheroes is when they have to face their own fears. There’s a lot of talk about sort of strong female characters but to me, playing Valkyrie, her strength is really when she’s able to be vulnerable, when she’s able to say like “hey, all my sisters died and that sucks and I drink a lot because of it and I don’t know why I’m here anymore”. I feel like a lot of us feel that way sometimes where we don’t know what we’re doing, if we’re strong enough, and if we can do the things that we want to do. For me, I feel like that’s what makes these characters really human in a way, is that they can sort of face their fears, that they can find community, that they can learn how to trust other people and lean on them. That’s what makes them, you know, awesome.

Last Friday was National Coming Out Day, Thompson talks about Valkyrie being the first LGBTQ woman of color superhero in mainstream movies
Thompson: It feels heroic to me, all the people that are coming out when they are inside of communities or when they are inside of families where that’s really challenging. The past two days have been really moving for me, because I’ve gotten to take so many photographs with folks with their pride flags or with their bi flags. One woman today told me that she was gonna use the photograph to come out and we just hugged each other for such a long time. I just want to say to all the folks out there, if you are coming out, if you have, I see you. If you have reasons why you’re not ready, I see you, too. You are loved, you are supported, and I hope that we can get to the space where – I feel so proud to get to play Valkyrie in this way – but I hope we can get to the space where we see so much representation that we don’t have to congratulate anybody, because we know that it just exists and it’s not going away. I feel like I see that more and more, but you guys are heroic to me. 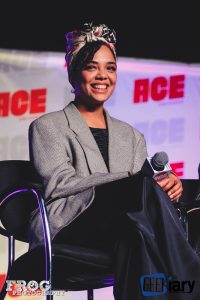 Larson on the relationship between her directorial work (Unicorn Store) and her work as a performer
Larson: They both kind of flow into one another, because ultimately [my interest] is in the process. It’s in the experience of the process, which is part of why the two of us got close forming Time’s Up. We’re interested in what that process looks like and how we can better work as a team, how we can create more safety which ultimately leads to more honest vulnerable performances and work. At this time when I feel like we’re so open and we’re growing in what that representation looks like on screen, to make sure that our sets support that. Having spent most of my life on sets, all of that experience leading to directing and being able to hold space for my actors and my crew. I learned so much, because when you’re an actor, you’re not included in the pre-production or the post process. Now that I have that understanding, it’s completely shifted even the work that I do in production, because I have a deeper understanding of what it takes to get to that day on set and also how I can better serve my directors so that when they’re in the editing room they’ve got more colors to paint with.

Following the traction for a Marvel A-Force movie, Thompson and Larson talk about what they would like to see in the MCU for their characters
Thompson: Not just because Valkyrie would like to hang out with some of the beautiful, strong, intelligent, fantastic women in the MCU; she would, platonically, in a team-building way. I just want to work together as a team, us women, doing things in a film or two.
Larson: That day with all the women together [the all-female Avengers scene in Endgame] felt real good. I will say, it was hard to keep a secret because it was just one of those things you want to be, “I had the coolest day ever!” and people are like, “What were you doing in Atlanta?” and I’m like, “I’m just vacationing”. That is what we want; we want to see females working together, ideally in their own film. We really have been saying this a lot, but the more people talk about it and say that they are behind that and are interested in that, the higher likelihood there is that that could happen. People are listening. 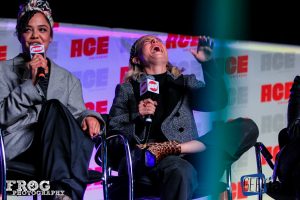 On what they would say to their younger selves (Larson mentioned her 2000s bangs)
Thompson: We are living in a time, if you look at TV and film, where there’s the most representation that we’ve ever seen and that’s so exciting. I think maybe I would have told my younger self not to wait for that to exist and to create it. I would say that to anybody out there that has an idea or feels like they have something to say and they don’t see it. They feel like maybe it can’t exist. If you tell it, then it exists, so I would probably say that to my younger self – “Don’t wait for anybody to give you permission to tell your story.” It’s so cool now, with the internet, you can really take agency and do that.

The last question of the panel basically broke lesbian Twitter on Saturday and transcribing it would not do it just justice so click here to go watch it (watch till the end, trust me).

The full panel is available on Ace Universe Facebook page.

Previous:Ace Comic Con: A Conversation With Gwendoline Christie
Next: Big Mouth at NYCC 2019: Disclosure as a Musical?!?