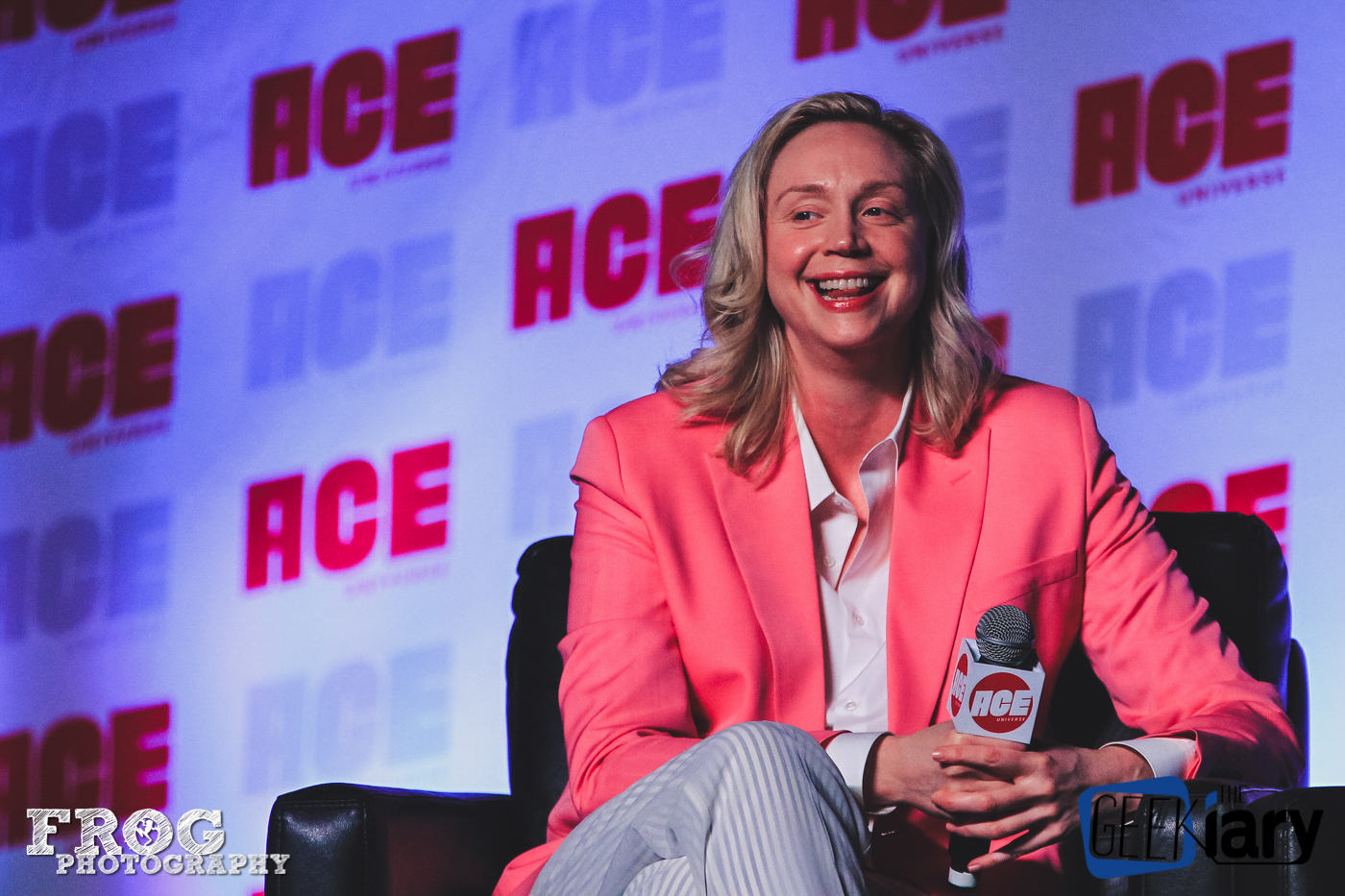 Last Saturday, Gwendoline Christie opened the stage at Ace Comic Con Midwest. Due to her roles in Games of Thrones and Star Wars, her panel had quite the turn-out.

Gwendoline Christie has played incredible roles from Brienne of Tarth in Game of Thrones to Captain Phasma in Star Wars so I was really looking forward to this panel, and Christie did not disappoint. She spoke in such way that you could not leave the panel without feeling like your spirit had been lifted up. To be honest, her entire panel was inspiring, but I have managed to select several moments that really stood out for me.

About her roles
They mean something to me, and I think what we found is that they mean something within popular culture. That’s really why I persevere in trying to do this job. Those characters spoke to me in a very profound way and in a way that I didn’t expect them to speak to anyone else because of what we’ve been fed in mainstream media, which have been from a very particular – and I’m gonna say it – patriarchal perspective. We hadn’t had a lot of diversity. We hadn’t heard a variety of women’s stories. I found these characters that spoke to me on many different levels, and I just wanted to communicate them and communicate what it said to me. That’s about joy to me. That’s my absolute state of bliss, is to be in service of an idea greater than myself and doing something that I feel is really vital as a female character, whether it’s changing perceptions about the way women look or whether it’s being a badass with a sword. 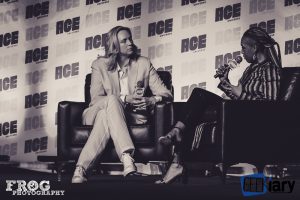 On being a role model and inspiration for women in general but particularly for taller women because there is this idea of the patriarchy out there that creates what a mold is supposed to look like.
I think we’re seeing an awakening in society, and I think that’s really vital. The Internet has given us a forum where we can make our voices heard and what we’re hearing is that people want to see themselves represented in the stories that are told. And because we also live in a world where so much of our information comes from a television or some kind of device or from a phone – for a lot of people that’s their main source of information – we need to see a realistic depiction of our world. People can only really respond to what they’re given, and if we’re fed one thing, how can you be expected to gather a strength if you identify with something outside of that we’re seeing? We’re seeing a lot of demonstrations at the moment. Most recently in Washington, there was a demonstration about trans rights. The brilliant performer and activist Justin Vivian Bond was recently arrested, and I would like to say, “Congratulations and well done, Vivian,” and to all of those people who demonstrated. I think we just need to have a wider representation of the people in our world, and it’s really hard if you’re fed something that says you’re not included.

Sometimes, no matter how big or how small, you have to make a leap of faith. You have to say, “It doesn’t matter if no one believes in me, I think that this is right.” And then slowly perhaps other people start to respond to that and an idea can gather steam. That can help to change the world. I know it sounds idealistic, but it’s true. It takes a deep breath and it takes a moment of courage and a moment to also say I am relevant. I deserve to exist. I exist and therefore I deserve my place in the world. It’s that moment of taking a breath and taking that step. I know it’s so hard. I know how cripplingly hard and difficult it is, but it can literally start with the smallest thing. Like how hard it is for all of us – even something simple like lifting up your eyes and looking someone in the eye and saying “hello” can feel really difficult and challenging. But if you start there who knows what you can possibly achieve.

About her Emmy nomination and most rewarding part of the journey
Life is very difficult for lots of people in the world and a career in the Arts is difficult. It’s hard also when we have those kind of archetypes that we feel excluded from. I’ve been open about the fact that I was told no a lot, but so many actors are told no. But I never really saw why so much emphasis would be placed on a group of random elements that come together and form the way where we look and were born. I didn’t understand why any judgment process would ever be made on that because we have no control over it. We only have the control over our actions and the choices that we make, so what are you gonna do if a lot of people are telling you no, other than perhaps be bloody minded and say, “Yes, actually. Yes, this is what I want to do and I believe I have something to say and I believe it’s something worthwhile and I’m prepared to work really really hard.”

If you’re told no constantly, you can start to believe it, particularly when you don’t see representations of yourself or someone you identify around you in the world, in the media, in your entertainment. It’s true that confidence comes from being given a chance. I’m hugely lucky that some people have given me a chance. With regards to the Emmy nomination, the reason I did it was as a testament to the character and what I believe the character of Brienne of Tarth represents. I was very lucky to play that part, and I believe she represents a woman outside of the patriarchy who lives life on her own terms, who’s doing what she can to excel in her chosen field. And I also worked very hard. I just wanted the possibility of the opportunity and I wanted the possibility to have better job opportunities. The greatest thing that’s come out of it is that people have told me they’ve been inspired by it. Genuinely, the greatest thing is that if you can inspire someone to take action for their own lives or for something they believe in then you have done something of your job. 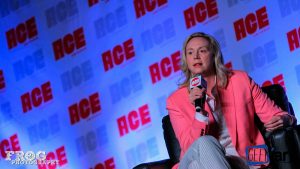 On whether her character on Game of Thrones was done justice in the final season
I’d have to say that I did [believe it was done justice]. I did because I love that Brienne got to have this sexual experience, her first sexual experience [Christie cheers with the crowd]. I love that she got to have something she desired, that she wanted to have. I love that she elected to have that experience, that she undertook it. It was her choice. I loved that her storyline for the final season wasn’t defined by that. How Brienne of Tarth ends up is: she gets the promotion she’s always wanted and is alive. I love that about her. I love that it didn’t tear her down. The fact that she had that experience with Jaime Lannister and it didn’t live on, it didn’t demolish her, it didn’t break her down. She went through a human experience and she experienced a part of the wide variety of human emotions. But she achieves what she wants, she actually achieves her dreams and she becomes Lord Commander of the Kingsguard. She’s made a Knight on her own terms, so yes, I was delighted.

On wearing armor in Game of Thrones and Star Wars
There are those two roles I’ve played that have had armor in a majorly featured role. I just see it as clothes. I think that if someone chooses to wear that, then they have a really intense desire to protect themselves. They also have an iron will because it’s a challenge.

In Star Wars, it was the idea of a woman wearing a suit of armor that was genderless shouldn’t have felt new but was. Actually, the idea that a woman could fight in combat and not have her physical shape delineated felt really exciting to me. It was really ringing new and it was. It shouldn’t have been, but it was, because I would imagine that to wear armor delineating the shape of your breasts would not be very practical.

The full panel is available on Ace Universe Facebook page.