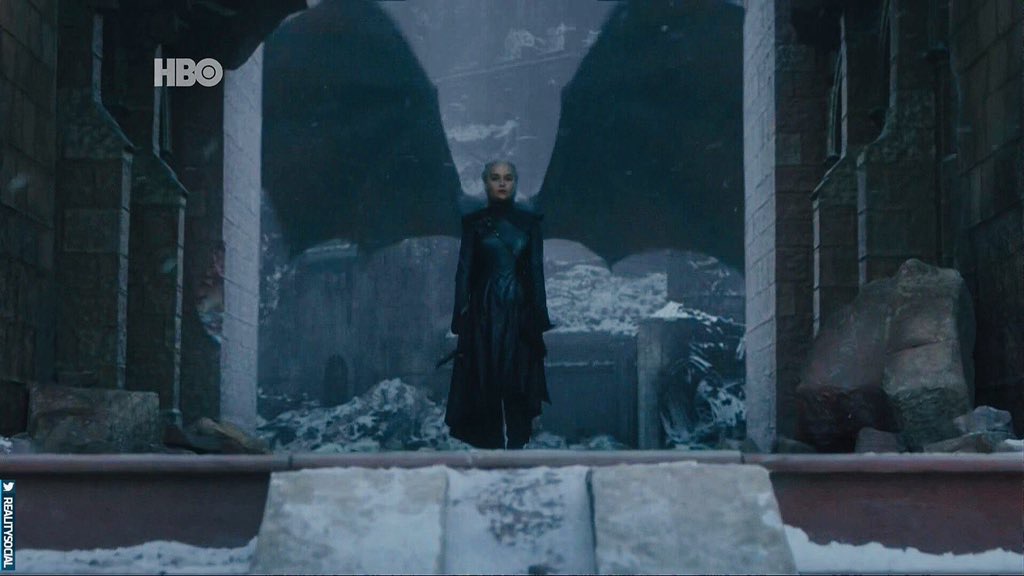 My expectations for ‘The Iron Throne’ were incredibly low, so they were easily exceeded. In many ways, I got what I wanted. But I’m not feeling the satisfaction that the people pushing back on critics keep saying I should be feeling.

Some people may be surprised to find that I didn’t hate ‘The Iron Throne’ completely.  I’ve been harsh on the last couple episodes, yes, but it was always the way they were going about things that bothered me, and not where we eventually ended up.  I’ve been rooting for the iron throne to be melted by either dragon fire or wild fire for a while now.  As far as the narrative themes of the show are concerned, it made the most sense.  And that’s exactly what we got.  I cheered out loud, which is not something I expected to do during the episode considering my immense disappointment the past two weeks. 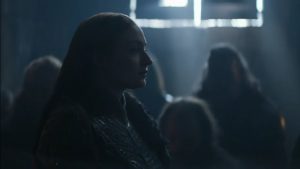 Likewise, I’ve been rooting for Sansa to take the North as an independent Kingdom all the way since 2013.  This is my longest running desire and I’m glad it came to fruition, but I’m not happy that the plot made me almost hate Sansa in order for this to happen.  Let me be clear, I adore Sansa.  But her and Arya’s reactions to Daenerys this season have been extreme and almost feel petty considering she saved the North from destruction from the Army of the Dead.

Maybe given some actual backing in the text it won’t feel so damn petty, but we didn’t get the benefit of seeing internal monologue for their justification for hating the person who saved them.  We are just meant to assume it makes sense because Northerners are fiercely independent, and that’s it.  But they are also honorable, and the way they treated Daenerys didn’t feel honorable.  Knowing the reputation of the North isn’t enough justification for this.  We needed more.

So I won.  Kind of.  My girl Sansa gets to wear a crown, the North is independent, and the Iron Throne has been melted.  Despite hitting all these points, I don’t feel a sense of relief or any real satisfaction.  Based on the push back against critics being whiners for ‘not getting what they want,’ shouldn’t I be overjoyed that I got the ending I’ve been rooting for?  Well, I did get my desired ending.  And I still don’t feel too good about it.

Perhaps something the people constantly pushing back on critics need to realize is that our criticism hasn’t really been about the conclusion, but rather the rushed and sloppy journey it took to get here.  But they won’t listen to that bit of criticism because they’d rather gaslight us and make us question the validity of our criticism. I expect similar push back here, completely ignoring all the things I like about the series and the fact that I technically got the ending I wanted. 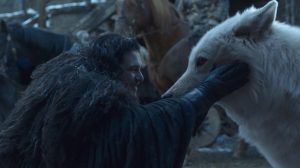 But before I get into the stuff that truly left me unsatisfied all the way through (because so far it’s just the journey and not the conclusion), I want to touch on one last good bit from ‘The Iron Throne’: Ghost got some pets.  Yay!

All things told, I think Jon being sent to the Wall again is a satisfying conclusion for him.  The Wall itself doesn’t make too much sense anymore.  The Night King has been defeated and we’re on good terms with the Free Folk now.  So is there really even a Night’s Watch left to send Jon in exile to?  Judging by the fact that he left Castle Black and went north of The Wall, perhaps not?  But we aren’t really told anything definitive.  It also doesn’t make much sense that they’d stick to exiling him after the Unsullied left considering they were the ones imposing a sentence on him in the first place.  They’re gone, man.  You all can do whatever you want to do now.

Despite all these gaps in narrative logic, I still think Jon will be happiest up north of the Wall with the Free Folk.  The conclusion for him is satisfying, but the journey that got us here absolutely isn’t.  There’s too much lack of justification for sending him there and too much pain over the Daenerys story for me to feel good about it, even though ultimately it’s a good ending for him.

But hey, this ending gave us this killer meme from Reddit’s r/FreeFolk and I’ve honestly been laughing about it for about 12 hours solid now. 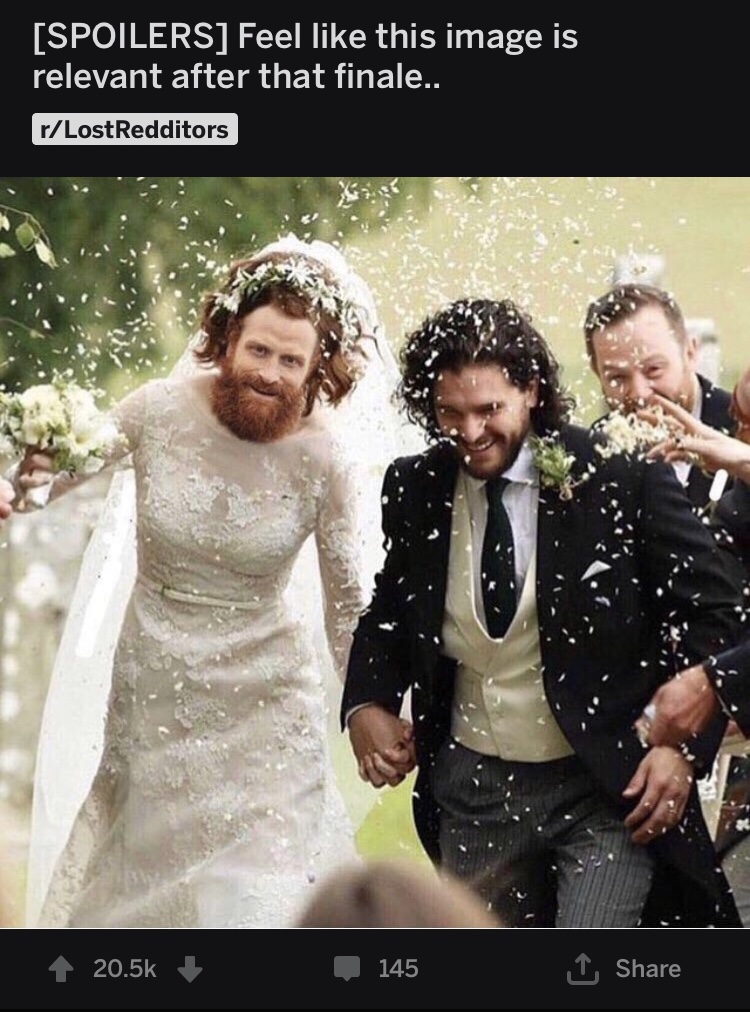 Bring on the Tormund/Jon fanfic and fanart! I hope they have a long and happy life together north of the Wall with Ghost and their fellow Free Folk.  Honestly, it’s a surprisingly happy ending!  Who would have guessed anyone would find happiness in this mess?

So now that I’ve talked about the conclusions I liked and how I still don’t feel comfortable with the lack of canon material supporting them, let’s talk about the main ending I didn’t like: Daenerys.  This entire season did Daenerys dirty.  Obviously I’m a fan of Daenerys so this is an instance where people will throw the ‘you just didn’t like the ending’ excuse my way, in which case I’d like to redirect you to the 700 words above this paragraph for why you’re wrong on that front.  In this case I both hated the conclusion and the journey.  And I talked at great length about how Daenerys’ turn didn’t make sense given what we’ve seen so far in my review of ‘The Bells‘ already, so I’m not going to spend a lot of time rehashing it here.

There’s also a stark double standard with what people consider extreme actions from Daenerys.  I had the incredible opportunity to chat with a BBC reporter about the women of Game of Thrones, so I’m going to quote myself from the Game of Thrones: How the women of Westeros took centre stage article:

“Male leaders like Jon Snow and Tyrion Lannister have executed people and devised plans that led to thousands of deaths (The Battle of the Blackwater). The Baratheon brothers waged bloody wars for a shot at the throne.

“When Daenerys acted, she was deemed mad, power-hungry and violent.”

Give that article a read, because the other people who took part were insightful and had a lot of incredible things to say about the women on the show.  It was incredibly fun getting to take part in that piece.

But back on the general topic of the double standards placed on Daenerys, there’s also this tweet from last night:

IDK. “Daenerys’ cold reaction to the murder of her abusive brother foreshadowed her turn to madness” is weird analysis of a show where Tyrion strangled his girlfriend to death and we’re supposed to see him as a lovable hero.

It was painful to see the destruction of Daenerys, but not painful in the way that the Red Wedding or the execution of Ned Stark was painful.  Those had strong narrative backing and were heart breaking in a way that has defined George RR Martin’s style.  And I think Daenerys’ turn could be that, too, if it’s given the chance to develop at a natural pace and if it isn’t thrown together in sloppy attempt to get to the end of the series as soon as possible.

I’m not entirely sure if I’ll ever like this conclusion for Daenerys, but if I’m given a logical path to it, I can see myself being less angered by it at the very least.  And really, that would be on brand for the series. 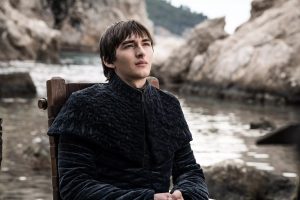 I’m also baffled by Bran being elected as King.  There’s no more Iron Throne, so I guess the wheel has been broken technically.  And Bran can’t have kids (I hope they aren’t implying paraplegics in general can’t have kids, because that’s inaccurate, but okay) so there will be no line of succession for now.  And it looks like they are taking steps towards Democracy, even if Sam’s suggestion of a true democracy was shot down with uproarious laughter (and ouch that moment was cringe).  So it’s interesting.  I guess.

However, the justification for Bran’s rule, like so many other things in this messy rushed conclusion, was severely lacking.  Just a few episodes ago he rejected the title of King in the North because he “wasn’t Bran anymore,” and now he’s totally cool being called Bran here and being put in charge of the Six Kingdoms.  And speaking of the Six Kingdoms, if the North is allowed to break off, I’m fairly certain Dorne and the Iron Islands will want to break off too, so his control of the Six Kingdoms feels rather tenuous.   It just doesn’t feel like a strong or logical conclusion.  It doesn’t feel like it’s going to hold for long.

But again, maybe it’ll feel more logical with George RR Martin’s set up for it all.  Maybe it will somehow make sense and we’ll be given a reason within the text for why Dorne and the Iron Islands will stay loyal and why Bran rejected one title but was willing to accept another.  And hey, can we get some justification for why he just sits there when Arya says that nobody knows what’s west of Westeros when he very clearly does since he knows everything?  The books have been better about setting up limitations for greenseers, so I’m sure that’ll make sense.  But we haven’t done that much of a deep dive into the limits of his powers here and it’s assumed he is essentially all knowing… except when he isn’t for plot reasons.

And on that brief note, Arya’s conclusion generally makes sense (greenseer limitations not withstanding), but I still have the same bitter feeling towards her as I do about Sansa.  And that’s incredibly unfortunate because she’s one of my favorite characters.  The Starks were also done dirty, despite them pretty much winning across the board.  They won, but they came off as incredibly petty while doing so.

So over all, I’m not as upset with the episode as I expected, but I had set my expectations as low as they could possibly go.  I expected to get nothing I wanted, but instead I got almost all of what I was hoping for.  But it was a sloppy and rushed way of getting there.  It’s not the worst ending ever, but my criticism has never been about the ending, but rather the journey.  And hopefully George RR Martin will give us the journey that the show deprived us of.