Game of Thrones 8×4 Review: The Last of the Starks 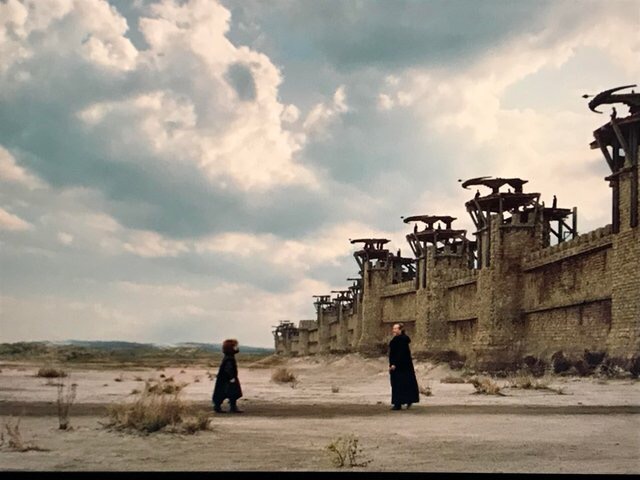 Game of Thrones Episode 71 “The Last of the Starks”: Breaker of Ships, Destroyer of Character Arcs, Withholder of Direwolf Pets. Let’s just pretend the show ended at ‘The Long Night’.

It’s hard to put into words just how terrible ‘The Last of the Starks’ was, and I’m fairly experienced with calling out how terrible this show can be at times. I don’t hold back with this show, and yet I’m finding myself at a complete loss for how to channel my rage into a productive piece. But I guess I’ll start with what angered me the most: Ghost deserved a good head pat before Jon Snow ditched him. Seriously, Jon, pet your damn dog. 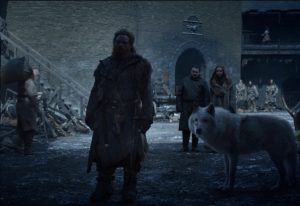 This may sound like a silly place to start my rage, but Ghost has been getting neglected for two seasons already. We finally got him back only for him to get sent into battle, lose an ear, then get ditched without so much as a nice pat on the head. There are only two Stark direwolves left, only one of which is with their respective Stark, and it was a crappy way to drop the character who is such a strong symbol of House Stark. Ghost deserves better.

The writers might have been aiming to leverage that symbolism. Jon is leaving behind his Stark heritage, heading to King’s Landing, maybe even deciding to make an uncharacteristic play for the throne. Maybe he couldn’t bring himself to say goodbye to Ghost like he did with Sam and Tormund. Maybe he had to make the farewell cold and distant in order to sever that tie, but frankly, I don’t care. Pet your damn dog, Jon.

The lack of head pats for Ghost isn’t the only grievous sin “The Last of the Starks” committed. There’s also the complete character assassination of Jaime. The development we’ve had for 8 seasons is getting tossed in the garbage and I’m furious. The sex scene between him and Brienne was incredible and I was thoroughly enjoying this relationship finally coming to fruition, but then they had to go and ruin it by having him break her heart and leave. This show has a habit of being soul crushing, but that was a particularly bitter move that they really could have done without. Have we not been broken enough? They had to crush Brienne too just because they could?

Once more I’m going to attempt to play Devil’s Advocate with the plot (and the show doesn’t deserve that, honestly). Perhaps he needed to break her heart in order to go down to King’s Landing and be the one to kill Cersei. Perhaps he’s not really betraying the North as it’s currently being presented, but needed her to believe that’s what he was doing. I’ve predicted that he’ll die in the process of killing Cersei for quite some time and these actions line up. I’d consider this plot twist highly likely. But, like the lack of head pats for Ghost, I don’t care about the potential justification. He didn’t need to crush Brienne like that. There’s no excuse. Find another way.

Playing Devil’s Advocate for this writing team is exhausting, and I’m not going to do it anymore. They don’t deserve the benefit of the doubt. 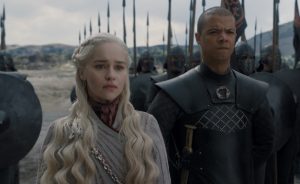 At this point, it’s fairly clear that Daenerys is going to be triggered into turning into the “Mad Queen.” Prior to ‘The Last of the Starks,’ I thought that idea was awful. She’s shown herself to be a compassionate ruler, earning the loyalty of those whom she has freed and assisted as she moved across Essos. She was a Queen who fought for the less fortunate among society, so the ‘Mad Queen’ scenario is preposterous given what we know of her character. She’s not mad.

But now? Now I can see it. And I’m kind of rooting for it. As soon as the episode ended, I shouted “BURN THEM ALL” at the screen. It was a shock even to myself that’d I’d gotten to this point, but I’m ready to throw in the towel and watch Westeros burn.

Her father didn’t start off mad either. It was triggered by his capture during the Defiance of Duskendale (which isn’t mentioned on the show, unfortunately). Before he was subjected to physical and physiological torture, he was also quite benevolent. Then he was pushed over the edge and it all went to hell. While there’s really no justification for killing innocent civilians, there’s at least an explanation for how he got to that point.  And now, with half her army destroyed, two of her three dragons dead, and her two closest advisors gone, I think Daenerys is at that point too. And I hope she burns the entire Red Keep to the ground.

I’m going to back up here and acknowledge that yes, there are tens of thousands of innocent people currently in the Red Keep. And yes, this is the exact type of behavior that got King Aerys II murdered and the Targaryens ousted from power. Narratively I shouldn’t be rooting for this if I enjoy Daenerys as a character. I should want her to remain peaceful and let the innocent civilians live. I should want her to prove herself benevolent to gain the trust of Westeros. But, as I’ve said twice in this review, I don’t care.  I’m done playing the game and rooting for anyone.  I’m done caring about characters making the right moves politically or being diplomatic.

This won’t be the ending we get, though. The throne will remain. Daenerys will die. Jon will be King. The writing is on the wall for this ending and I hate it. Burn them all.