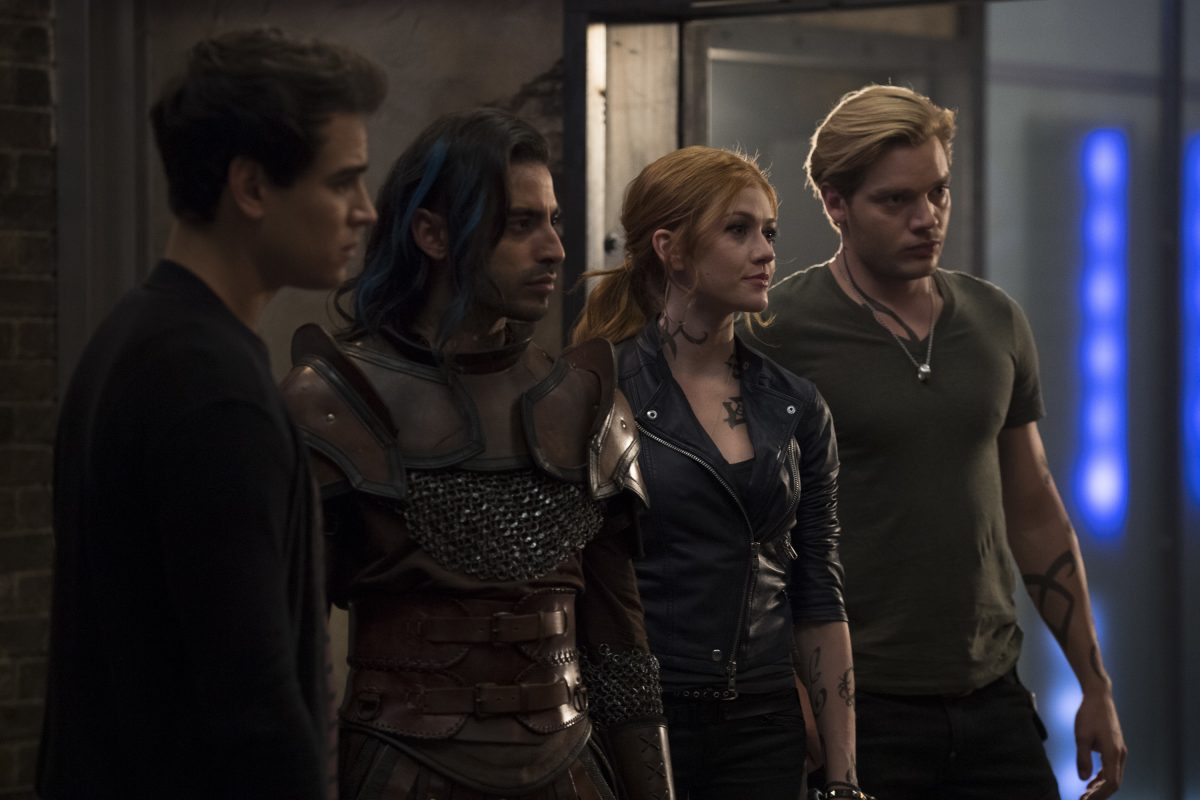 The day is here. The super-sized Shadowhunters series finale – double episodes “Alliance” and “All Good Things…” – closes the show by finally taking care of Jonathan, the specter that’s been hanging over our Shadowhunters’ heads since season 2.

“Alliance”, the first half of the Shadowhunters series finale, is spent almost entirely in Edom, as everyone tries to come up with a way to save Magnus from Lilith. Izzy convinces Meliorn to send her there, as the debris from Glorious exploding has infected her blood with Heavenly Fire. The others, meanwhile, must rely on a quick-thinking Clary, who concocts a cockamamie plan to ally Shadowhunters and Downworlders by binding them with a special rune. I always wondered, considering how useful an ability that is, why Clary wasn’t just constantly inventing new runes. Turns out we find out why later! 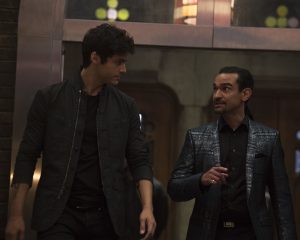 Shadowhunters has always had moments of levity, but I don’t think I’ve ever been quite so amused as I was when I saw Alec, Clary, and Jace dealing with the side effects of their Downworlder bonds. Alec being amazed at magic pouring out of his hands and Clary’s disgust at realizing that she would have to drink blood were great, but honestly, Jace not being able to lie was quite possibly the best thing I’ve ever seen. Meliorn giddily asking Jace repeated questions (“On a scale of 1 to 10, how handsome do you find me?”) and Jace almost gushing about Simon to Izzy were high points of the entire season; I would like to shake hands with whoever had that idea.

Less amusing were anything having to do with Jonathan and the Seelie Queen. Is it me, or did the Seelie Queen cozying up to Jonathan come out of nowhere? Regardless, I’m basically completely over Jonathan as a villain. There were plenty of opportunities to establish him as a force to be reckoned with, and instead he was a whiny man-child who was creepily obsessed with his sister. He didn’t come across as dangerous until “City of Glass”, and by then it was too late for me to care. The fact that he is the final big bad makes this all the worse.

“Alliance” also introduced the beginnings of a Luke plot that absolutely could not go anywhere in the short amount of time there was left. I know that season 3 was largely in the can when the cancellation order came down, so there wasn’t a whole lot they could do, but that just makes me angrier that this is the last episode. Luke was criminally underused all season, and they finally gave him something interesting to do just in time for the show to end forever. I am very intrigued by the idea of him not only being a Shadowhunter again, but also being a Praeter spy.

“All Good Things…” started showing our three main couples in three scenes that show varying degrees of intimacy. A newly kindled romance between Izzy and Simon was the most risque, but I absolutely adored the little moment where Magnus watches Alec sleep. In fact, the first five or so minutes of the episode had me smiling like a lunatic. I loved the two of them bickering as they planned their wedding. It can come as no surprise to anyone reading this review that I am a huge fan of their relationship; it’s so refreshing to see a queer relationship end happily.

Their wedding was absolutely perfect – what a huge difference between this one and Alec’s first wedding! Everyone was so happy, and the guests consisted of all kinds – Seelie, vampire, warlock, Shadowhunter. The fact that Robert walked Alec down the aisle and Maryse walked Magnus just goes to show how much everyone has changed. It was great to see former enemies smile as Magnus and Alec got married; I never thought I would like Lorenzo, but after he was so patient with Alec and risked so much to save Magnus in “Alliance”, I found myself wishing we had gotten to see them team up more often. 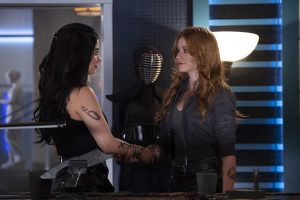 Romance isn’t the only thing that put a smile on my face. Alec asking Jace to be his best man (again), Clary and Izzy tearfully asking each other to be her Parabatai, and Maryse being so ridiculously excited for the Malec wedding were all scenes that were well done. These core relationships have endured so much, and it’s great seeing how they’ve matured over the seasons. I’m so happy seeing our mains so happy.

But, as the title implies, it can’t last. First, Clary is visited by her mother, but her mother is only there with a message from the angels, warning Clary that her ability to make runes has angered the angels, and that if she continues to use it, they will take away her powers. I actually squealed when I saw Jocelyn appear, but the fact that she was literally there just to scold Clary for using an ability the angels gave to her is ridiculous. If they didn’t want her to use it, they shouldn’t have given it to her. And using her mother to do so? That’s just cruel.

Second, there’s still the small matter of Jonathan. “If looks could kill” is no longer just a phrase to Jonathan, who is now able to drain people of life with just a look. He starts his rampage with the Seelie Queen and continues on to hit various Institutes across the world, killing Shadowhunters and mundanes in order to send Clary a message that everything that ever happened is all her fault. On the plus side, Robert and Max make an appearance trying to defend the Los Angeles Institute. On the down side, you know, lots of people died. 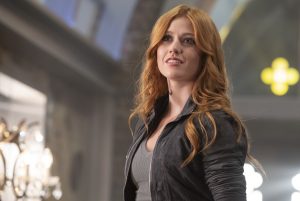 Clary finally takes him down in a rather anticlimactic showdown. Despite the fact that she has tried to talk him down numerous times throughout the series, it finally works, and as they embrace, she creates a rune that kills him somehow – even knowing that she is sacrificing her life as a Shadowhunter to do so. In retrospect, this was foreshadowed in “Alliance” when she and Simon are discussing what their lives have become and wondering if they would go back to their mundane lives if given the chance. And of course Clary, who wouldn’t change a thing, is slowly robbed of her powers and even her memories. It was heartbreaking watching her stumble out of the Institute, her runes vanishing from her skin, until she eventually forgets everything.

It’s a series finale, so we have to have a mini-epilogue. A year in the future, and things are very different in the Shadow World. Downworlders and Shadowhunters now work together, led by Alec the Inquisitor and Magnus the High Warlock of Alicante. Magnus and Alec are still very much in love, and so are Izzy – now head of the New York Institute – and Simon, who is finally publishing his and Clary’s graphic novel. For that matter, Luke and Maryse are still together, Luke (apparently now unable to grow a beard) working with Alec to strengthen the alliance with Downworlders. Maia, who was sadly absent for the majority of the finale as she went home to take care of personal matters, has refurbished the Jade Wolf and is turning it into a restaurant all Downworlders can enjoy. These are changes that they can all be proud of.

But much of this rings hollow, as Clary is absent. I am honestly surprised and kind of annoyed that everyone literally walked into Hell to save Magnus but it seems like they were content to just let Clary slip out of their lives. I’m sure a lot happened in the year we didn’t see – and Jace and Simon are obviously not thrilled with things – but it still feels empty, that everyone is out there living their best lives…only Clary doesn’t remember anyone.

The ending scene of the Shadowhunters series finale sparks hope, though. Jace, who keeps constant tabs on Clary, goes to one of her art shows, and she spots him. “You can see me?” he asks, calling back to the very first episode. Not only does she see him, she remembers his name. The final song is upbeat and hopeful, and you can’t help but think that somehow, some way, Clary will be a Shadowhunter again.

The Shadowhunters series finale was everything I wanted it to be. The villains seemed inconsequential – both Lilith and Jonathan taken down with minimal fuss, once it came down to it – and the focus was on the characters and their lives. It’s a happy ending – or at least a happy-ish ending – on a show where happy endings were few and far between. Every character has grown and achieved something, no matter how small. Everyone is still friends (sort of).

Shadowhunters as a show had its ups and downs, but I genuinely enjoyed the ride.

Have you seen the Shadowhunters series finale? What did you think?