“City of Glass” is actually a quite good season finale. It’s action-packed with raised stakes – not everyone survives – and ties up many of the season’s plotlines. But it would make a terrible series finale because of that cliffhanger, which is why I’m glad we still have the two-and-a-half hour finale to look forward to.

Considering that obtaining the Morningstar Sword was Jonathan’s entire purpose, I really wish this season had spent some time on that plot instead of dealing with whatever incestuous weirdness was going on between Jonathan and Clary. I know it’s in the source material, but honestly, considering everything they changed in the television adaptation, this is one thing that should have been adjusted. It’s just creepy and largely unnecessary. I mean, if it turns out that, like, Jonathan has wings, I really think that should have been the focus of the season. “City of Glass” would have been the last episode of the season, and it was basically the only episode where Jonathan felt like a formidable opponent.

And of course Clary thinks she can still reason with Jonathan. Give it up, sweetie, that ship has sailed. It’s stabby time now.

I think I may be offended that Clary is somehow a better fighter than Izzy despite the fact that Izzy has been training her entire life and Clary has not. However, I am glad that it was Simon’s influence that made Clary hesitate long enough for Jace to stab her with Glorious and free her of Jonathan’s influence. Clary and Simon’s relationship is one that has taken a backseat this season so it’s nice to see it acknowledged in such a big way.

Speaking of Simon’s relationships, I am pleased and surprised that the flirtation between Izzy and Simon lasted all season and developed naturally, rather than being rushed just because. It puts more weight into the relationship; I was legitimately disappointed when they didn’t kiss after he helped her pull the shrapnel out of her back. 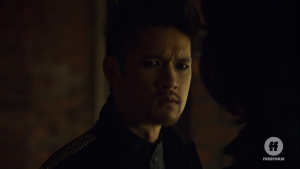 I actually really love how much Maryse loves her children. I never thought I’d like her as a character after season 1 but she has really grown on me. I’m a big fan of her meddling ways now that they’re working in my favor in “City of Glass”, as she immediately went to find Magnus when she found out he and Alec had broken up. I am a little surprised that Magnus discovered the truth so quickly; I thought for sure they would drag that out longer. That said, I literally cheered when Magnus showed up in Alicante, and his and Alec’s reunion was deeply heartfelt (though it would have packed more of an emotional punch if their breakup had lasted a bit longer) and everything I’ve come to expect from the two of them.

And yes, I was extremely giddy during the proposal scene, although I couldn’t help but go, “Um, there are, like, demons attacking.” Leave it to Malec to have the world’s worst timing. (I would have never lasted months with that cliffhanger. Thankfully we only have to wait a week!)

I never really cared for Jordan, but he was much better this season. He’s wronged Maia in the past but he more than made up for it, saving her life, ultimately, at the cost of his own. I genuinely felt for Maia when she returned to the fire with their food and found that he had died; his death hit me harder than I expected it to, even though I knew it was coming. Perhaps it was Maia’s heartbreak that did me in. I’m worried about her now. Yeah, her “slow motion illuminated by the fire” strut was badass, but it’s clear she’s hurting. And she doesn’t really have anyone to turn to with Luke caught up in the Praetor. (Side note: Hey, Bat! I’d hoped you weren’t dead but considering we haven’t seen you literally all season, I couldn’t be too sure. Seriously, where was this dude?)

I wish the show wasn’t ending! There is still so much that can be explored, and they were obviously setting up future storylines in this episode that will probably not get dealt with. I got some serious shady vibes from the Praetor during their interactions with Luke. They’re clearly up to something shady and they wand the Heavenly Fire serum for something.

All in all, as I said, “City of Glass” would have made an excellent season finale, and I am seriously glad that they made the decision when they cancelled the show to give us a proper ending for the series instead of ending on a cliffhanger. Sadly, I don’t think there’s going to be enough time to answer all my burning questions, but I should hopefully get enough closure to be satisfied.

Have you seen “City of Glass”? What did you think?