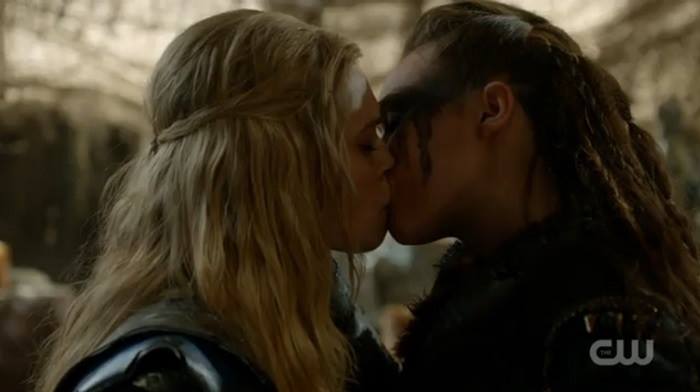 Ladies and gentlemen, Clarke Griffin is bisexual! On last night’s episode of The 100, she and Lexa shared a [mutually consensual] kiss, and I feel like starting this review talking about anything else would be ridiculous. Earlier this week a promo featuring the kiss made the rounds and fandom exploded. I was waiting until the episode aired to comment so that I could see the context, because I learned a long time ago not to believe in promos. Promos lie. This one in particular, however, did not. Clarke kissed a girl, and she liked it. The 100 cares not for your ideas of binary sexuality.

First off, let me say that I am one hundred percent on board with bi!Clarke. I’m on board for bi!everybody, to be honest. It only increases the amount of awesome ships that I could be shipping, and on this show I basically ship everyone with everyone else. It’s that kind of show. Creator Jason Rothenberg has said before that the world of The 100 is one in which sexuality is fluid. This moment between Clarke and Lexa has been building for a while, and truth be told, I am torn.

You see, I’m not entirely sure that Lexa is a good influence on Clarke. But after watching “Bodyguard of Lies”, I realized that I was being pretty insulting to Clarke for assuming that Lexa would have any influence on her. In fact, the reverse seems to be true. In the past, I have not liked the direction that Clarke was going, and that was primarily due to Lexa. However, last night’s episode proved that Clarke does not intend to be swayed by her. I still don’t know if the two of them together is a good idea (I don’t think they bring out the best in each other), but since Clarke is still mourning Finn, we’ll cross that bridge when we come to it. 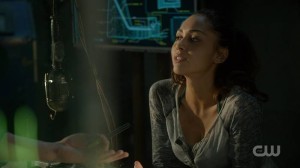 Speaking of still mourning Finn, Raven featured more prominently in “Bodyguard of Lies” than she has in the past several episodes. Most of it was her being her usual genius self, but she appeared to be moving on from Finn. I initially attributed her hesitation with Wick to body issues with her leg – until the next morning. Grief is a killer, mourning is a process, and I don’t fault Raven at all for feeling unsure about taking those first timid steps. Nor do I blame Wick for his reaction. I quite like the two of them together, and I don’t want to spend the next few episodes with them embroiled in mutual misunderstandings. They’re both too smart for that, but I do wonder if the guilt Raven is most likely feeling for sleeping with Wick will be compounded once she learns that Bellamy is now basically alone in Mount Weather.

Meanwhile, Bellamy proved his fabulousness yet again by not only locating the source of the acid fog and (seemingly) shutting it down, but also by blowing the whole thing to bits once he realized he was being deceived. I don’t know if he knows yet that his radio has been cut off, but with only two episodes left, and the Grounder army on the move, we won’t have to wait much longer to find out his fate.

I love Bellamy, and in the past it’s been shown that he’s not the best at planning. That’s why I like him being in Mount Weather – I constantly worry about his safety, as The 100 has no problems killing off main characters, but now he has the opportunity to shine. He has been incredibly resourceful, and everything he does is further proof that he is not the same man who came to the ground. 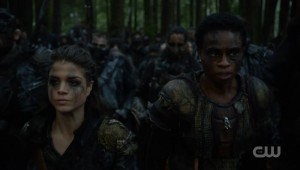 The Blake sibling I’m most curious about, however, is Octavia. Octavia is severely underestimated and deserves to be showcased more, but I’ll take what I can get. In last night’s episode, Octavia confronted Clarke with the truth about the missile strike and almost ended up dead for it. It’s clear that she doesn’t much care for Clarke’s methods. Then Indra revealed that she knew the truth as well, and Octavia seemed torn on the issue. She clearly respects Indra, and Indra agrees with the actions taken by Clarke and Lexa, yet Octavia is willing to sever ties with Clarke because of it. Octavia is arguably the Sky Person who suffered the most under the strict regime of the Ark’s Council, so it will be interesting to see where she goes from here.

As for Jaha and Murphy’s desert wanderings, I’m not sure what else to say that. I’ve mentioned before that Jaha is being presented as a Moses-like figure, but to what end, I don’t know. I think the goal is to introduce yet another society, one like Mount Weather, but also not. It’s clear that whoever (or whatever) lives in the City of Light has not only electricity but technology. So what are they doing with it? Also, I sincerely hope that the water they’re crossing isn’t salt water, because they should be dead or severely dehydrated by now.

After last week, I said I was feeling hopeful about where this is all headed. I’m still optimistic, but now I’m becoming a little more wary. I have a feeling we may get the result we want, but in a way we don’t expect.