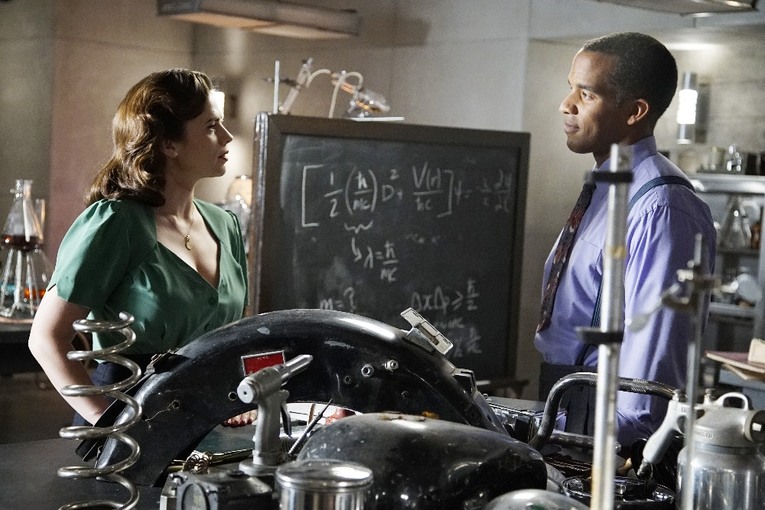 Gosh I love this show. I know I say that every week, but every week it brings so much joy into my life. But just because I love it doesn’t mean I can’t recognise its flaws. Like it’s great that they made an effort to diversify Agent Carter, but I’m a little less impressed that “diversify” continues to be introducing a black man – probably as a potential love interest for your female lead (see: Agents of S.H.I.E.L.D, Jessica Jones). It would have SO AMAZING to see Peggy’s feminism intersect with a WOC from the same time. 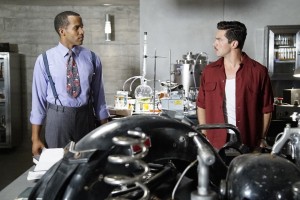 That said, I really do love Jason Wilkes. He’s a great addition to the show and the tension between Reggie Austin and Hayley Atwell is steaming! I didn’t even bother to pretend Wilkes wasn’t coming back last week, but I was worried they would draw out his supposed death for more than one episode. Nope, he’s back; unfortunately he’s invisible and intangible, which is a nice nod to his comic book namesake but also sadly sidelines him for much of the action.

Howard Stark is always a joy, especially his genuine and continued respect for Peggy. He just loves her so much, and Jarvis. Plus he always adds some theatricality to the world of Agent Carter. Not that this show needs more theatricality since its move to the west coast, but he just takes things to a whole new level! The studio backlot – with a nice shoutout to Marvel comic Kid Colt – was beautiful, especially the part where Howard tells Peggy and Jarvis to get out of the shot and they step backwards awkwardly. That was THE joke of the episode.

Special shout out to this exchange, which was not subtle but still very cutting:

Howard: You want to play a sassy beer wench?

Peggy: I’d rather be the cowboy.

Howard: I like it. I don’t think the audience is ready yet.

Peggy: But they’re ready for a movie based on a comic book? Sounds like a dreadful idea!

The other plus about episodes that have Howard Stark in them is that he brings with him an army of impeccably dressed women. Every outfit in the scene at the Arena Club was fabulous. Especially Peggy’s. Unfortunately while Howard always has an entourage of women around him, not many of them get a speaking role. This episode was a step backwards in regards to the number of women. It scrapes by the Bechdel test with a conversation between Peggy and Whitney Frost, but this episode really felt the lack of Ana and Rose. 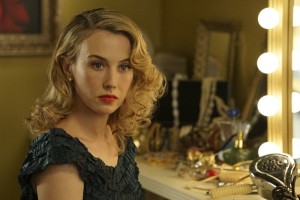 Whitney Frost is a fantastic addition. Her struggle with agism in Hollywood, her secret past as a super scientist, her need to resort to emotional manipulation to get anything from her husband. She’s just a great character and a fascinating villain; I genuinely cannot wait to see what they do with her. Plus watching her suck that creepy director into her body after he touched her Darkforce scar was terrifying. It was legitimately scary and that’s something this show has always lacked, a little genuine horror.

Finally the worst part of this season continues to be everything Thompson does. Does anyone even care that he’s having a crisis of faith? I sure don’t. The only time he’s worth anything is when Peggy’s insulting him or punching him, which is always entertaining.