Supernatural 11×11 Review: Into the Mystic 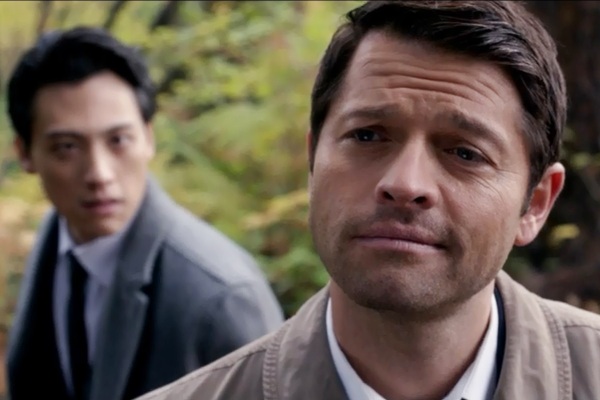 I must admit I’m quite conflicted by the recent turn of events on the show.  On the one hand, I’m excited to see Misha Collins stretch his acting chops.  On the other, I hate seeing Cas abused.  I’m also not over the last time Cas got possessed by something and then disintegrated into a puddle of black goo and presumed dead for most of the season.  The last two episodes have also jerked me around emotionally.  In my last (apparently quite controversial?) review I enjoyed the set design of the cage and everything about Rowena, but the rest of the episode was a complete failure in my book.  Then last week we got some interesting plot and stellar acting all around, but they ended up killing one of the few recurring women on the show (and the woman with the record for most appearances, I might add). And let’s face it, this show does not have a good track record with how it treats its women (please read the linked article before saying “men die too!” okay?), so that alone put me back into a really cranky mood.  I’ve got trust issues with this show, guys.  And I’m not sure if I’m more excited or scared about what’s happening here. 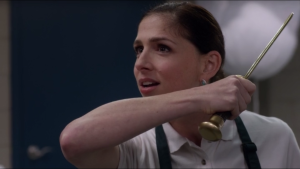 Despite the fact that they killed the longest recurring woman on the show last week, this episode actually had some incredible diversity.  We start out with an incredibly badass woman who basically sacrificed herself in an attempt to save her husband and daughter.  One of the main characters is a deaf woman and sign language is used in the episode.  She’s also a badass hunter and on a mission to avenge the death of her parents by tracking down the banshee.  Can we add her to Wayward Daughters, please?  And then we have Mildred, an elderly woman, also completely badass, who is dripping with self confidence and joy.  She was absolutely wonderful.  Hell, make her a Wayward Daughter too. Wayward Grandmother?

But let’s back up and talk about Eileen, the deaf woman, for just a moment.  Her story closely parallels the Winchesters, right down to having Men of Letters heritage.  Her and Sam even bonded over their desires to become lawyers and their need for revenge against the monsters who took their parents from them.  I not only want Eileen to come back, but I want her and Sam to bond more.  Sam deserves happiness and there were just so many things right with this pairing that I can’t help but ship it a little bit.  Typically I don’t ship heterosexual pairings as I like my women to be fierce independent characters who don’t exist to be paired with a male character (or I prefer them to be lesbians, but that’s beside the point here).  In this case, however, I am definitely rooting for Sam/Eileen.  Is there a ship name for this yet?  There needs to be one. 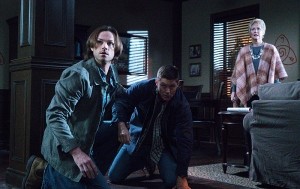 The part of the episode that conflicted me the most was Castiel.  Misha’s acting blew me away.  As Lucifer, he got to use his more natural voice.  When he was Lucifer pretending to be Cas, he dropped back down into his deeper voice, but it wasn’t quite right.  His mannerisms were also just so slightly ‘off’ (though he still got all up in Dean’s personal space).  So far, his acting is beating out my fear that this could go horribly wrong, but in the back of my mind I remember what happened with the Leviathans.  I remember how it took my favorite character away from me for an entire season and I’m terrified that that will happen again.  These two competing emotions inside me can’t quite come to a compromise, so I’m basically forcing myself to be cautiously optimistic as this story plays out.  Maybe it’ll be better this time.  Maybe we’ll get amazing acting from Misha, and get to keep Castiel around after this arc is done.  I’m praying to Chuck that this is the case.

Overall, I actually quite enjoyed this episode.  It was a wonderful reminder about why I stick it out when things get so abysmal that I’m tempted to jump ship, with or without Castiel.  Despite the massive flaws from this season, this episode has proven that the show I fell in love with is still there, and the things that bother me about this show can be changed.  We can have diversity.  We can show off Misha’s acting without eliminating Castiel entirely.  We can give Sam some happiness, even if only for a moment.  Thank you, Supernatural.  I really needed this episode.