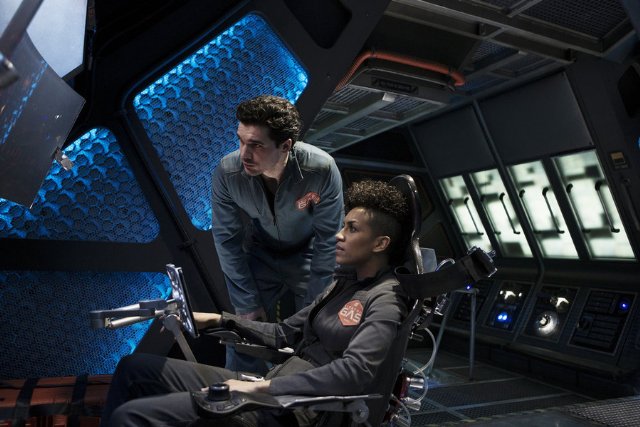 We finally had some major convergence this week on The Expanse. The episode started out a bit slow, but as always with this show, had an amazing payoff and some stunning visuals along the way. Even though we ended with a ton of new questions, “Salvage” definitely supplied some answers. And finally, just in time for next week’s season finale, we are seeing the storylines come together and our characters teaming up.

Who else found themselves in the Amos camp this week? Just me? I don’t know what it was, but our Roci brute seemed to soften a bit, and even acknowledged Holden’s leadership by the end of the episode. I loved getting some screen-time between Holden and Naomi–they have a realistic chemistry. Film and television have a tendency sometimes to force the female into coupling with another male, and although it would seem natural for Holden and Naomi to be shown that way, they are co-workers: friendly and cooperative. They get emotional and sentimental with each other, but it isn’t sexual, and it is most certainly platonic. Having no idea what their relationship is like in the books, I sincerely hope that their relationship continues down this path, because I adore them as “just” friends.

So the bio-weapon was re-introduced to us, and the Roci crew, and it was a bit terrifying. I like that the crew quickly realized that it was a dangerous and likely a weapon. Sometimes in Science Fiction there are too drawn-out conclusions that make the viewers lose credibility in the characters, so it was satisfying that it happened so quickly. I do wish we had even more answers, but obviously this is a series, so I cannot be disappointed when I don’t get everything I want in the first season. It seems clear, however, that the weapon feeds off energy, and that is how it’s triggered. I am anticipating a lot of darkness upcoming.

The visual effects this week were incredible; they always are, but this episode hit it out of the ballpark. Probably the most impressive part for me was being able to see the footage from the drone while inspecting the Anubis. I loved seeing all of the different stations and ships, and Eros was cool! It definitely felt like a completely different place; it had a different vibe than anywhere else we have visited. It does seem like kind of a rough place. It is, after all, the murder capital of the Solar System.

Speaking of Eros, the entire scen 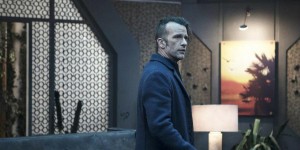 e at the Blue Falcon was intense. The way that the scene was directed made the tension unbearable; we all knew that something was going to happen, but when and who was involved were variables that kept me on the edge of my seat. It was incredibly well-done, and suspense is difficult to pull off in a single scene with little to no dialogue. I am so glad that Miller is going to join our crew; he seems to be well-suited to help them, and will (hopefully) save Holden’s skin. He is also surprisingly good detective, and such good luck that he showed up when he did. Unfortunately for Miller, Julie is dead. I was completely shocked. Even though the character forced the stories to converge, I really figured that she would be alive and provide more answers. I guess I thought she would be an important character for us to engage with, but it was her actions that were important.

The Earth story is starting to pick up a bit, but really only as it pertains to Holden. I was really hoping that we would know more about Chrisjen and her motives by now, but hopefully everything will become more clear in the season finale and into subsequent seasons.

I felt “Salvage” was a good penultimate episode since everything is starting to really tie together. I cannot wait for the two-hour season finale next week!