Many fans have been decrying that season 11 is the worst season to date.  I disagree.  You can’t top how terrible season 7 was, but episodes like this make it hard to refer to it as even remotely “good”. The plot holes were so big I could drive an Impala through it; I often wonder what the script supervisors are actually doing most of the time.  Not only were the inconsistencies jarring, but the weird Amara sexuality issues are still chugging along, making me rethink the show’s supposed shift on female representation.  No, this isn’t the worst season.  But man, it’s not remotely good. 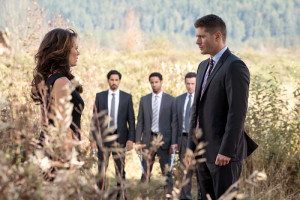 I almost feel bad about my issues with Amara.  She could have been an interesting villain if it wasn’t tainted with the weird age issue and the dubiously consensual (ugh, non-consensual, really) relationship with Dean.  The idea of an all-powerful creature with abilities equivalent to God is super intriguing, but the romantic relationship between Dean and Amara, when just a few short episodes ago she was a child, is something I cannot get past.  Furthermore, Dean didn’t ask to be partnered with her.  Any romantic or sexual advances she makes on him lack his consent.  Hell, he even flat out said “no”.  At best, he’s attracted to her by supernatural means, which makes his feelings false.  At worse, he doesn’t actually feel anything and she’s just throwing herself on him repeatedly despite him saying no.

I know people’s first thought when they read my criticism of Amara will be that I’m opposed to her because she ‘gets in the way of a fictional ship.’  No.  I’m a Destiel shipper, and I don’t hide that fact.  But I adored the sweet relationship between Dean and Jo, and I enjoy what could have been between him and Lisa (though I wish Lisa would have been fleshed out a tad more).  In fact, I adore new women on Supernatural in general and appreciate efforts to have permanent female characters on the show.  This is why I feel guilty about my anger about her.  She could have been good.  But alas, she’s a complete train wreck and makes me extremely uncomfortable.

But let’s be real, we’ve complained enough about Amara on this website.  And it wasn’t even remotely the worst thing about this episode.  The entire premise was flawed.  The point of the episode was to break into The Cage, as though that were some impossible task.  Castiel got into it at the end of season 5, but the angel was nowhere to be found in the episode.  If Castiel was going to refuse, at least make that explicit on screen.  Hell, they could have simply included a throwaway line from Dean about it and this plot hole would have been sealed up.  Instead, this is a giant plot hole.  Where’s the angel, anyway?  Probably watching season 8 on Netflix and reminiscing about better seasons.

Another plot hole that drove me up the wall was the inclusion of Mark Pellegrino as the representation of Lucifer.  In Sam’s flashback it makes sense.  Sam has to have some sort of mental representation of him besides a multi-dimension wavelength of celestial intent.  But in person?  That doesn’t make any sense whatsoever.  But honestly, I don’t know how this plot hole could be closed up.  You can’t exactly have Sam have a conversation with Lucifer’s true form, either.  Maybe have him possess Adam’s body?  And where is Adam anyway?  Did we really forget about him that much?!  No really, WHERE IS ADAM?!  And where is Michael?  Even if Adam’s poor body was burned to ash, his angelic self should still be kicking around.

Here, let me fix this plot hole with a five second fix: Rowena’s spell created a visual representation of Lucifer and what we saw in that cage wasn’t remotely accurate to what’s actually there.  Boom.  Done.  Why couldn’t the writers have fixed it this easily? I don’t know.

While 95% of this episode was terrible, I actually did enjoy the scenes between Sam and Lucifer (plot hole not withstanding).  I thought the visuals of the cage and Hell were eerie and well done.  They were simple, but we don’t really need complexity with Hell.  The minimal red ambiance and occasional flashes of otherworldly lightening were enough to get the point across.  It set the scene beautifully.

As a final note, I love Rowena.  Seriously.  This show can have a ton of problems, but Ruth Connell is a bright shining star in all the madness. I’m glad she exists.

I have further thoughts on the season as a whole, but myself and several other fans are working on a midseason roundtable to discuss everything in context.  We hope to have it up by the weekend, but there’s a lot to analyze after these nine episodes, so we may need some time to digest it.  We’ll be talking in depth about Amara, the representation on women on the show, that Hellish cliffhanger, and much much more.  Stay tuned!

30 thoughts on “Supernatural 11×9 Review: O Brother Where Art Thou?”