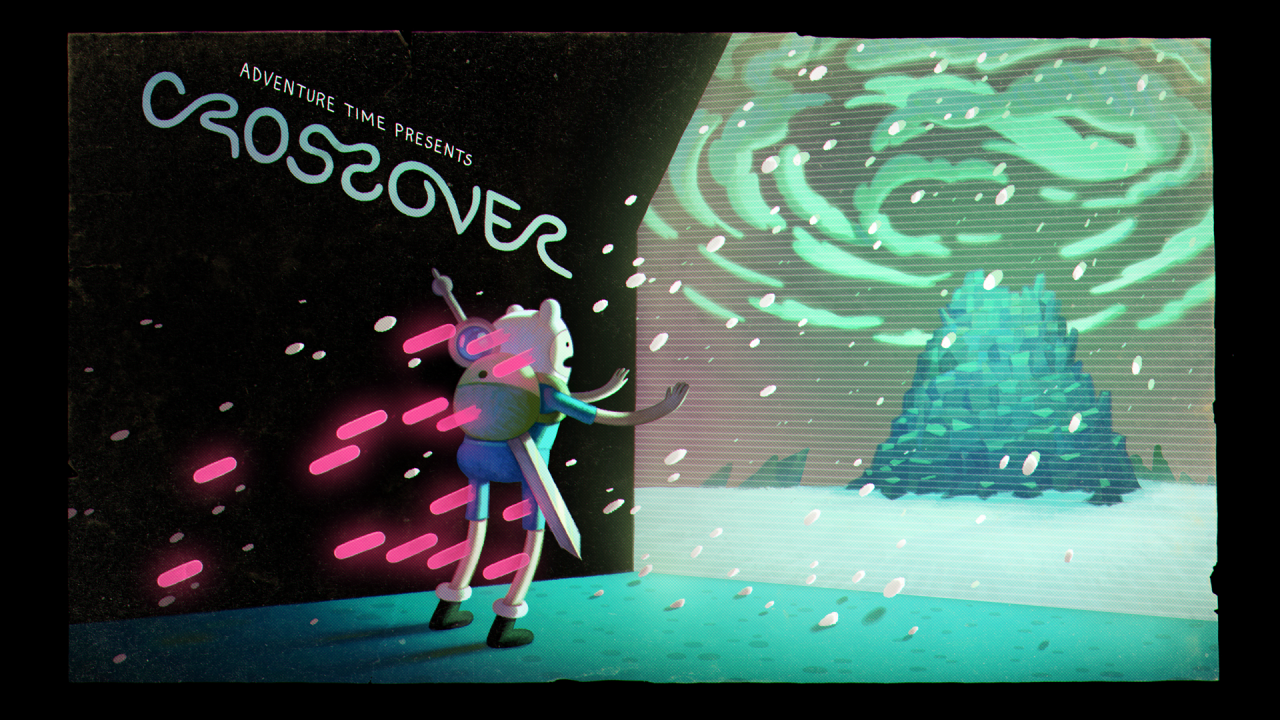 Before the promos for this episode of Adventure Time aired, the fandom was speculating wildly as to what the titular crossover would be – Uncle Grandpa, Steven Universe, maybe even Rick and Morty?

Instead, we got an interdimensional romp, and the “crossover” was within Adventure Time itself – the alternate universe Ice Finn that was seen during the incredible two part season 5 opener, “Finn the Human” and “Jake the Dog.”

It’s been seasons since we’ve seen our old pal the Lich (outside of Sweet P), and he did not disappoint as the villain in “Crossover.” Throughout this episode, he morphs from a Jake-hybrid, to a muscle bound monstrosity, to a six-armed eldritch horror. Getting reminded of his ultimate plan to destroy the multiverse by assembling the Princess Gems also raises questions regarding Betty’s actions from two episodes back  in “King’s Ransom,” where she did a mysterious something to the Ice King’s crown.

I am quite fond of Prismo’s design and character so it was great to see him participate in an adventure with Finn and Jake once more. His lines are some of my favorite examples of Adventure Time’s quirky dialect; from this episode: “It could defs be catastrophic to the architecture of these realities,” “I am losing my pix over this biz!” “By proxy, y’all two will be in the dip too.” This kind of dialogue is not only giggle-worthy, it’s also sneaking in vocabulary lessons for its target audience.

Prismo’s presence usually means a lore-heavy episode, and “Crossover” was no exception, with appearances from Finn’s grass sword arm, alternate universe Billy (named Bobby), the Enchiridion, the aforementioned Lich, and the enigmatic Finn Sword getting to speak. There were also a comically heavy-handed few lines about the ominous and heretofore unknown boss of Prismo. It’s nice to know that in a show like Adventure Time, their Chekov’s guns will most definitely go off in the future, more often than not in satisfying ways.

Which isn’t to say they don’t make their viewers wait for the good stuff – at the end of this episode, Finn watches through Prismo’s iMovie-like interdimensional screen as de-iced Finn embraces his mother and father. He rubs forlornly at the arm he lost trying to stop his father from leaving during season six’s finale “The Comet”. While it seems like Martin’s part in Finn’s tale was wrapped up during that storyline, Finn’s mother has been a mystery almost since the beginning of this show. We can hope that “Crossover’s” final moments were a hint that Finn will learn more about her soon.

Jesse Moynihan is a storyboarding regular for Adventure Time, who was also one half of the team who boarded “The Comet,” lending a satisfying and thematically parallel sense of continuity between both episodes. Sam Alden, the other half of the team for “Crossover,” is Moynihan’s new partner on the show. If this episode is any indication his future with the program looks bright indeed.

There was a moment in this episode where things look bleak and Jake yells: “Finn! I love you. Just in case we eat it fighting this guy” and Finn easily and earnestly replies that he loves Jake too. For a sword-swinging surface-level boy hero archetype, I am always enamored with how readily Finn rejects the trappings of toxic masculinity. Even Ice Finn, under the influence of the Lich and the madness of the Ice Crown, ultimately just wants to be friends and help people.

The ongoing narrative of this series is less linear than other similar shows, but I cannot appreciate enough that even in a jampacked episode like this one, they take the time to make fart jokes. Never change, Adventure Time.

Previous:“Rise of the Tomb Raider – Baba Yaga: The Temple of the Witch” Game Review
Next: The 100 3×02 Review: Wanheda, Part Two