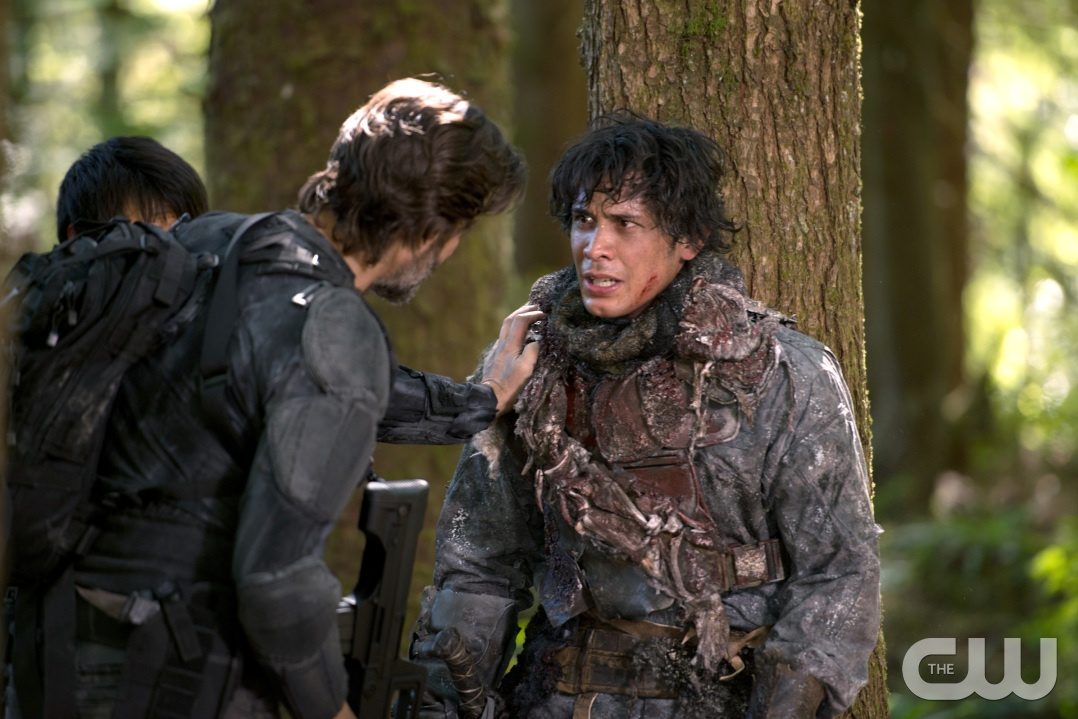 Last night’s episode of The 100 may as well have been called “Reunion”, since we had so many of them.

Monty was reunited with his mother (I’ll get to that, I swear), and Clarke was reunited with both Bellamy and Lexa, both of which had less than optimal results. I wasn’t expecting both reunions so soon in the season, but that’s The 100, always surprising. Clarke and Bellamy’s meeting felt a little anticlimactic, especially after everything he risked to get to her. As someone who has been anxiously waiting for the two of them to find each other again, I was thrilled with their reactions when he found her in the cave (and that he kept trying to find her even while wounded). But overall, I found it to be over way too quickly, and ended up with her still captive and him stabbed. (I know not all of you ship them, but check out this delightful parallel between Bellamy and Clarke’s reunion and the climax of Tangled).

Clarke coming face to face with Lexa once more was a bit of a shock – for both Clarke and, I think, the audience. For the entire episode, Clarke was a prisoner of Roan, from the Ice Nation. He had captured Clarke in order to bargain for return to his people after having been banished for as yet unknown reasons. However, when they finally arrived at their destination, it turns out that Roan had a deal to bring Clarke to Lexa and not to the Ice Nation queen. The Ice Nation is going to war, and Lexa needs Clarke’s help. Clarke responds to this request by spitting in Lexa’s face, clearly not over the events of Mount Weather and Lexa’s betrayal. Lexa seemed shaken by Clarke’s response, and I have to wonder 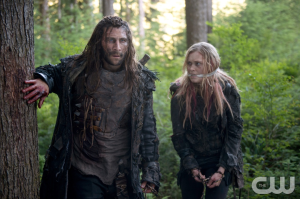 what she expected. Perhaps she hoped that Clarke would realize Lexa was just trying to save her people, but I think Clarke feels – and I tend to agree – that Lexa’s behavior in securing her bargain with Cage was a little too underhanded. Lexa seems to be a person who goes back on her deals, as evidenced by her treatment of Roan (who is the Ice Nation’s prince!), and it may take a long while before Clarke is willing or able to trust her again.

I found myself wondering, what about Indra? At the beginning of the episode, Indra is searching for Clarke alongside Bellamy, Kane, and Monty (I thought Miller was there too, was I just hallucinating?). Later, when they hear the war drums, she leaves to warn Lexa of the impending attack by Ice Nation. When Clarke is brought before Lexa at the end, Indra is by her side. Did Indra know that Lexa had made a deal with Roan to bring her Clarke? If so, why was Indra on the search-and-rescue party with the Arkers? I’m very confused.

Last week, Lincoln was very resolved that the Arkers should stop venturing to Mount Weather for supplies so often, as it looked bad to their Grounder allies. In “Wanheda, Part Two”, he changed his tune as soon as someone he cared about was in danger. Nyko appeared out of nowhere, riding a horse and gravely injured, demanding to be taken to Abby. Unfortunately, he has a blood type that is so magical that it can’t even accept donations from people who are universal donors, so they take him to Mount Weather to treat him in their medical facilities. After they save him, he sagely states that it is people, not places, that are evil. Octavia does not seem happy about his decision, worried about the tentative peace they have with the Grounders. That coupled with the recent news that Ricky Whittle (Lincoln) has been casts in Starz’s new American Gods has many people wondering if we should be worrying for Lincoln’s fate. 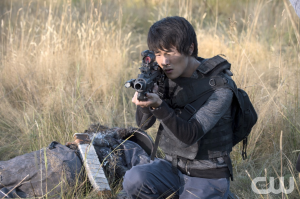 Speaking of Mount Weather, our new friend from Farm Station, Pike, seems to be very determined that the Arkers take control of the now-abandoned facility. He and the people from his section of the Ark had a very rough couple of months after landing, as their piece fell into Ice Nation territory. Apparently everything that happened to the 100 was a picnic compared to what these people went through, some of which we learned when Monty’s mother tried to explain to Monty what happened to his dad. Did anyone else get the feeling that there is something they’re not telling us about that? I very much got a “we’re hiding something” vibe from the entire situation, especially Mama Green’s insistence that all Papa Green wanted to do was find Monty.

Jasper needs to step back and look at his life, look at his choices. Why do they continue taking him anywhere when he’s proven to be at least semi-unhinged? Why especially would they take him to Mount Weather, when they know how he’s going to react to it? Abby’s claim that he needs to face his feelings just seemed like a weak attempt to have him along so he could be part of the story. Also, grief is strange and often makes people irrational, but Jasper acting like no one on the ground has ever lost anyone except him is rubbing me the wrong way. They have all known people that died. His snarling, “Your daughter killed him, too,” when Abby tried to bring up Finn was too over the top for me. We get it, Jasper. You can stop now.

And, as usual, I have absolutely no idea what’s going on with Jaha and A.L.I.E. and the City of Light. Is the City of Light something achieved through mediation? Is it similar to the Doctor Who episodes “Silence in the Library” and “Forests of the Dead”, where people’s consciousnesses were downloaded and then placed in a virtual world for safekeeping? Is he brainwashing people? What is happening?

What did you think of “Wanheda, Part Two”? Do you have any theories about the still mysterious City of Light? Did Lexa and Clarke’s reunion go the way you imagined it? Are Pike and Monty’s mother hiding something? What is up with Nyko’s sudden appearance? Let us know in the comments!