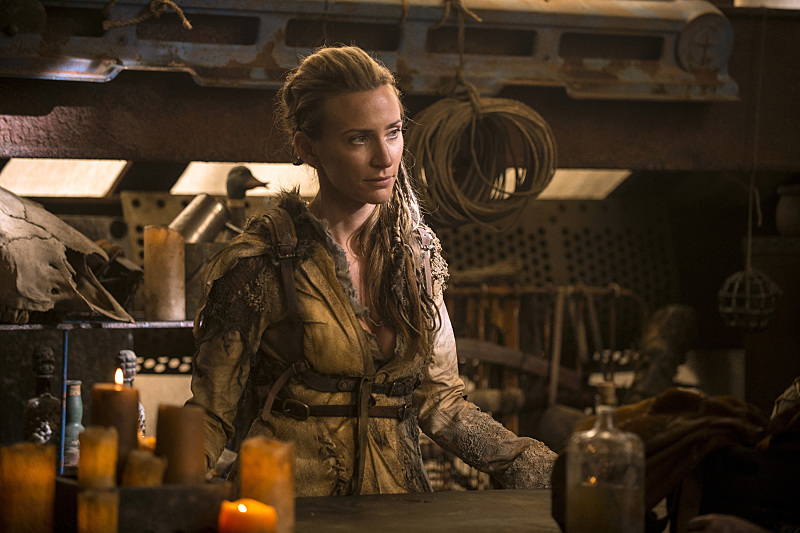 The first thought I had upon finishing the season three premiere of The 100 is how this show’s visuals continue to astound me…as does the acting, especially considering how shoddy the writing can be at times.

I was intrigued by the fact that “Wanheda: Part One” opened with Murphy, who was a fairly important but not exactly main character in the first two seasons. Unfortunately, despite some stellar theatricals on the part of Richard Harmon, this first scene fell flat with me. The montage of him going crazy felt awkward more often than not, likely because it wasn’t until the very end of it that we knew how long he had been there. And for the door to open right after he almost committed suicide? Even though we find out almost immediately that Alie and Jaha were pulling the strings there all along, the timing was still more than a little eyeroll-inducing (though to be fair, The 100 does that kind of a lot). As was the fact that it turns out the “City of Light” apparently isn’t a physical place, something that Jaha seems to have simply accepted.

And when Jaha gave Murphy that chip, I found myself rooting for Murphy to continue shoving him off, even despite the stupid “Pain, hate, envy…those are the ABC’s of me” line in response to Jaha telling him what a magical “place” the City of Light is. Of course the moment Emori shows up Murphy jumps on the boat – at least in the literal, physical sense – which pushed me back toward my original “ugh, WTF Murphy” mindset from when I was watching season one.

Back in the new “Sky People” settlement, which has been christened “Arkadia”, it was interesting to see that Lincoln seems to be becoming part of things there, teaching people to fight and even receiving what I think I’ll refer to as his Arkadia letterman’s jacket. That said, throughout the episode no one really listens to his advice – Lincoln tells Bellamy he probably shouldn’t push the mapping thing into Sector 7 just yet; Bellamy ignores him. Later Lincoln tells Abby that it’s too soon to go back to Mount Weather for more supplies; though she has yet to ignore him, it’s pretty clear she will. So I’m kind of with Octavia regarding Lincoln’s “belonging” to Arkadia – that is, he doesn’t. Not really. 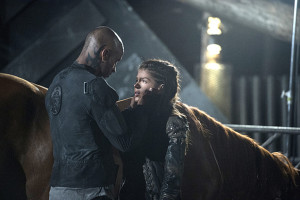 Speaking of Octavia, it’s both interesting and frustrating to see how far she’s still taking her Grounder obsession, still riding a horse while everyone else rides in a vehicle, scorning Lincoln’s Arkadia letterman’s jacket, making snarky comments when he speaks to her in the Grounder language, even still sleeping outside on the ground. She was persona non grata on the Ark but the Grounders wouldn’t take her either, and she clearly still cares about Lincoln…so where is this going? Hopefully that all gets figured out soon.

Meanwhile Jasper is still a total mess over Maya. Even now I’m torn about how I feel regarding Clarke’s (and I guess Monty’s) decision to kill all the people in Mount Weather, and I understand that Jasper truly cared for Maya, but his current state as constant troublemaker was a bit over the top throughout the entire episode. The fact that they brought him on their little expedition at all just screamed “he’s going to screw this up”…and hey, guess what, he did! Now several members of the Ice Nation are dead and that does not bode well for this whole tenuous peace they’ve somehow held on to for several months. Not only that, Jasper later attacks [I mean] Shawn Mendes simply for playing a piano that came from Mount Weather. Sure, he was replaying a crappier version of the awesome Violent Femmes song “Add It Up”, which they were listening to on their expedition earlier, but come on, Jasper…hold it together a little better than that!

Right after the confrontation with the people from Ice Nation, Kane radioed Bellamy and said they needed to come to Sector 4. Earlier in “Wanheda: Part One” Kane got a three-click signal on a secure channel and went to meet someone. That someone was obviously Indra, and when Bellamy and Monty arrived to collect them we were finally given our first information about Clarke – that being that “everyone” is hunting her because she is “Wanheda”, the Commander of Death, and the Queen of Ice Nation wants Clarke’s “powers”. 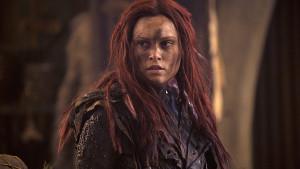 Speaking of Clarke, whoa red hair (at least for right now; who hasn’t seen those promo images where she’s blonde?)! And whoa killing a panther! And whoa not trusting anyone ohhhh wait Niylah tells one simple lie for her and next thing we know they’re in bed together.

Don’t get me wrong, that scene was hot and I love that The 100 is exploring Clarke’s bisexuality…but am I alone in being a bit concerned at how forced this situation seemed to be? Yes, we know that Clarke has visited this trading post several times, but the fact that she walked in and at first didn’t even trust the drink Niylah offered her, and then did such a quick 180 that led right to sex just felt like weak writing, a “let’s throw in sex for the sake of sex” situation. And if that’s not what this was, then they still didn’t do a very good job of showing any sort of prior attraction between Clarke and Niylah, or any history between them beyond brief, basic trade talk.

Of course there were some catch-up bits as well – we learned that Raven is still having major problems with her hip but doesn’t want to do anything about it, that Abby isn’t doing the best job of being both Chancellor and doctor, and then there was that quick shout out to the Ark residents who were having their contraceptive implants removed. Other than the fact that I thought they were trying too hard by using the same Violent Femmes song for Shawn Mendes’ cameo, the little ending montage was pretty great – we see that life is sort of moving on in Arkadia, at least for some, though of course we also got a shot of Lincoln joining Octavia in sleeping outside, Clarke waking up from a nightmare and leaving Niylah’s bed, while Jaha and Murphy’s boat trawls across the water and Bellamy, Monty, Kane, and Indra drive toward Niylah’s trading post in hopes of finding Clarke.

To be honest I think they could have ended it there, but what’s The 100 without a cliffhanger…or two? Instead “Wanheda: Part One” wrapped up with the Arkadia vehicle caught between two felled trees and Clarke captured by Roan as she tried to sneak away from the trading post. But hey, I have to admit…they left me wanting more and missing the days when I was binge-watching seasons one and two and didn’t have to wait a week between episodes.

What did you think of the season three premiere? Did it live up to your expectations? Where do you think things will go in next week’s “Wanheda: Part Two”? Tell us in the comments!