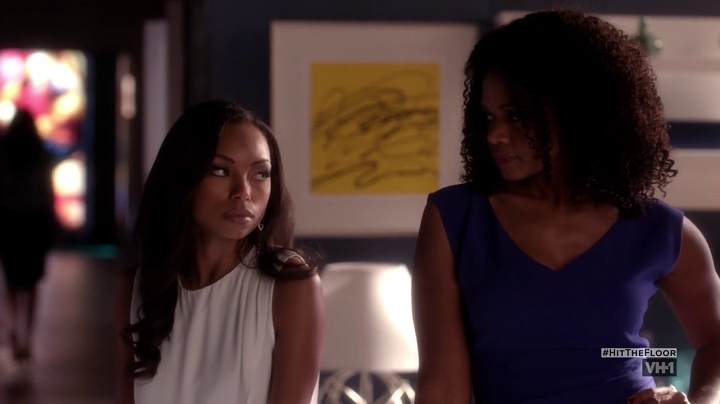 Hit the Floor upped the ante even more from the fast-paced premiere in this season’s second episode ‘Blocked’.

I have no idea how Season 3 is going to end. But with the way the plot is moving in Hit the Floor, I’m going to die very week because of all the suspense, and Zude feels! A lot happened in Hit the Floor Season 3 episode 2 ‘Blocked’, and it was made clear that characters will do anything possible to get the Devils under their control. Even though it was Sloane (Kimberly Elise) who set the League after Lionel in order to force a sale, preparing herself to testify against Oscar Kincade put her in danger this week. The moment the ‘supposed’ bodyguard came on screen I knew something was wrong. Coach Davenport doesn’t strike me as a character who would hire a bodyguard for Sloane without telling her. Sloane is one of my favorite characters on the show and I hope she finds a way get out of the mess. The one thing I liked about her predicament was the message that Oscar was still dangerous, even from behind bars.

Jelena (Logan Browning) shared some very strong scenes with her mother. The acting was on point throughout the scenes and I loved the raw emotion the actresses conveyed. There’s a lot of emotional baggage in the Howard household and though Jelena and her mother didn’t hug it out in the end, they did seem to come to an understanding.

Coming to Ahsha (Taylour Paige), the girl can’t seem to get a break. She’s clearly stuck between Derek and German. Her scene with her friends Kyle and Raquel, though comedic, made me realize that I’m Team Ahsha. Right now, her happiness is what matters to me. She needs to break away from both male love interests in her life.

She needs to dump German because he’s a murderer, and Derek because he’s clearly borderline obsessed with her. One might argue that Derek loves her, but for me, manipulating Ahsha’s life to make her his is not love. The moment he told Lionel he wanted Ahsha back to being a Devil Girl I found myself disapprovingly shaking my head. Even Lionel called him out on being too attached to her. Derek is doing everything in his power to keep Ahsha a part of his life, and that’s not going to end well for anyone.

Now it is time to talk about the reason for my inevitable demise by the hands of Hit the Floor. A new character named Lucas (Jonathan Bennett of Mean Girls fame) joined the show as Zero’s new agent. He immediately started flirting with Jude, and Lionel urged Jude to flirt back so they could close Derek’s deal. Jude’s adorably awkward side came out when he tried to flirt with Lucas. He indeed has ‘zero’ game.

While Jude found a potential love interest that wasn’t afraid of dating in public, Zero wasn’t having any of it. He sabotaged their interactions and kept coming on to Jude.

I mentioned TV screens exploding if the two touched each other, and touched they did even if it was for a second. After breaking off Jude’s conversation with Lucas, Zero reached out to pay the bill, touched Jude’s hand in the process, and I died! 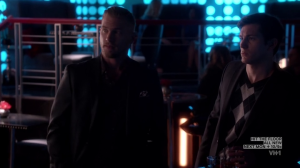 Zero is still into Jude and seeing him with other men clearly makes him jealous. But what Zero doesn’t understand is that Jude wants to live an open life. Jude more or less poured his heart out in front of Lucas. Zero was the first man Jude ever loved, and Zero not giving Jude what he wants is tearing him apart from the inside. I want Zude to be together, but I don’t think that will be possible unless Zero becomes open about his feelings for Jude. A closeted life is something that Jude isn’t interested in even if it means he can go back to being with Zero again.

Zero, being the handsome devil that he is, also talked to Coach Davenport about becoming Captain. While Davenport didn’t buy his sob story (I mean, who would? It’s Zero!), he did decide to make Zero Captain of the team. I wonder how that’ll work out with Derek willing to sign the contract with Lionel.

Zero also found out about Jelena and Terrence’s plan to buy the Devils and take it away from the Kincades. Will Zero go and tell Jude about it? I think so, because right now Zero seems willing to do anything to get Jude back.  He looks like someone who’ll fight everyone in sight if they mean to bring harm to Jude. But do you know what Zero won’t do right now?  Go out on a date with Jude to a public place. Oh! These two will be the death of me.

Before I end my review, I have to mention the dance number during the Devil Girls’ calendar shoot. It was well-choreographed and sexy. I wanted more!

Quote of the Week: “”I was in love with him before I knew what love was.” – Jude

What did you think of this week’s episode of Hit the Floor? Can Zude work things out? What is wrong with Raquel? Will Kyle be able to stop the movie from being made? Will Ahsha ever be without manipulative men in her life? Let us know!

Previous:‘Destiel’ Book to be Pulled from North American Market