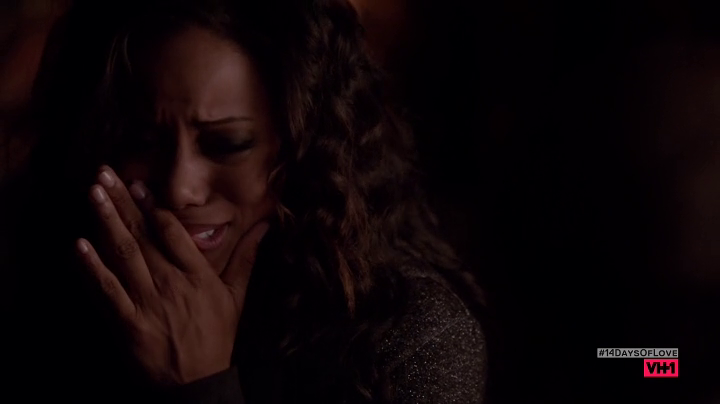 This week’s episode of Hit the Floor – ‘Good D’ – was full of shocking surprises. Ahsha’s world spins out of control, and Jude and Zero start a new chapter in their relationship.

The moment Zero found out about Terrence and Jelena (Logan Browning) planning to buy the Devils, I wanted him to tell Jude. He did tell him this week in Hit the Floor, but it came across as something he did to get Jude back. Both characters are socially inept in their own way. Jude (Brent Antonello) thinks too much about relationships and Zero (Adam Senn) has trouble revealing his true emotions. I will definitely be talking about all the Zude in ‘Good D’ but first let’s get the rest of the things out of our way.

Oscar really has it out for Sloane (Kimberly Elise). Even hiring a professional bodyguard isn’t enough to protect her. With a scene showing her practicing how to fire a gun, I think she’ll be using it soon on someone. She does end up getting police protection, but I think something bad is still going to happen. Oscar is doing everything in his power to get out of jail.

After hearing the news from Zero, Jude immediately told Lionel (Jodi Lyn O’Keefe) about Jelena’s plans. I don’t know about you all, but I like seeing such a cutthroat Lionel. She didn’t waste a second in making her next move. She shone the spotlight on Ahsha (Taylour Paige), and also focused on Zero. In order to make herself look like the best thing to ever happen to the Devils, she also decided to make the opening to the first game the biggest event yet. Lionel’s plan worked, with help from Derek, and she kept control of the Devils. Even having Coach Pete on their side couldn’t help Terrence and Jelena. I don’t think Jelena is going to let this one go easily, and I’m looking forward to seeing what she does next.

We also got a look into Terrence and Jelena’s relationship. The Jelena that Terrence knows is not the Jelena that the rest of the world knows and hates. You can tell that they both care deeply for each other, and Jelena won’t let anyone hurt Terrence. However, now Terrence’s best friend Derek is against him, so that might cause a rift in their relationship.

With the spotlight now on Ahsha, it immediately brought her closer to Derek and, surprising no one, they hooked up! It was a very intimately shot scene, with an extended clip that shows more of the goods. But I knew Ahsha was going to feel bad afterwards, and she did. She even decided to tell German about it. But before she could, German got into a car accident. While I get German is stressed out, revealing to Ahsha that he killed Olivia came as a surprise to me. I wasn’t expecting it to happen this soon. I thought someone else would realize what German had done rather than him telling Ahsha.

Things are not looking good for Ahsha right now. She has Derek after her, she found out that her current boyfriend is a murderer, and Jelena is out to sabotage her every move. I half expected Ahsha to physically attack Jelena when she ruined her initial plans for the dance number. But Ahsha kept her cool, and I have to say that the whole performance was wonderful. I liked the use of basketballs, the whistle, and the chairs. The team behind Hit the Floor’s dance choreography deserves all the praise they get.

Kyle and Raquel provided comedic relief in a very shock heavy episode. While Kyle is trying her hardest to make the worst movie ever, I think it is going to end up being a success.

Now let’s talk about Zude. The scene where Zero told Jude that he loved him was full of feels. Jude even said he loved Zero back. The smile that Zero gave Jude during that moment was swoon worthy. It had the power to set everything right in the world. But before the angels could descend from the Heavens and shine Holy Light on those two, Jude told Zero that love wasn’t enough for him. He didn’t want to be Zero’s secret anymore. I literally felt my heart sink when Jude drove away from Zero. How could Jude say such a thing to his husband? And I think angels contemplated exacting revenge on writer James LaRosa for committing such an evil deed. 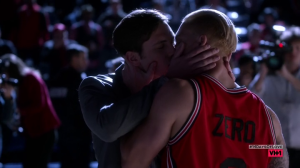 And to make things even worse Jude hooked up with Lucas, they had sex, and the world didn’t make sense to me anymore. Numerous thoughts raced to mind. Why was all of this happening in a single episode? Why was I being put through such turmoil? Which sins of my forefathers was I being punished for?

But then something miraculous happened near the end of the episode. Lucas revealed his true colors, and told Zero that Jude was an emotional mess. I wanted Zero to punch Lucas in the face. Jude is not an emotional mess! He is a puppy that needs love. Is that too much to ask for?

While Jude waited for Lucas after the game to go on another date with him, Zero came up to him and they kissed! He kissed Jude in front of everyone, and angels remembered how to sing again!

Now, before I continue fanboying about Zude, this is Hit the Floor I am talking about. Even if Zude has become public, you can expect a whole new set of obstacles already becoming a part of their lives. The media is going to go after Zero, and I don’t think he’ll take well to the kind of the media attention he’ll be attracting because he’s in love with another man. But I have faith in the power of love they both share. I know that they will overcome everything, even if the journey puts the viewers through an emotional wringer.

Quote of the Week: “I don’t imagine.” – Jelena to all her haters.

What did you think of this week’s episode of Hit the Floor? What will Ahsha do now that she knows that German killed Olivia? When will Jude and Zero marry each other, adopt kids, and run the Devils together? Let us know!

Previous:‘The Magicians’ Gets Renewed for a Second Season by Syfy!
Next: FEELINGS… with Captive Prince Author C.S. Pacat