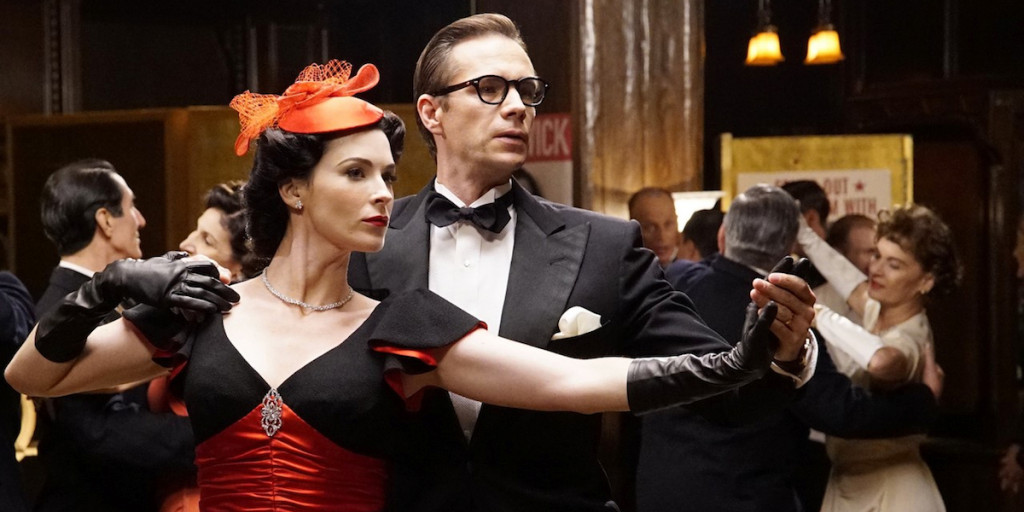 After a slightly lackluster effort last week, Marvel’s Agent Carter is mostly back on form with two epic episodes this week.

The return of Dottie was always going to inject some excitement back into this series, but there was a chance that an old villain could out shadow this season’s big bad. Not so. Last week it looked like Whitney Frost might have turned into a cartoon caricature, but “Life Of The Party” and “ Monsters” showed she’s just as terrifying as ever.

“Life Of The Party” uses something that Hollywood usually magically forgets about – injury. Last week Peggy was speared through with an iron rod, but instead of recovering miraculously in a short amount of time, she was forced to work around her injury. Her inability to perform, and the fact that they can’t trust anyone at the SSR, forced her to turn to an enemy for help. Dottie and Peggy’s relationship is beautiful. They’re not on the same side, but there’s a mutual respect there that is common between male characters but not often seen in female relationships.

Peggy’s injury also led to a great exchange between her and Sousa. Not the almost kiss, because that was as unnecessary and awkward as every part of their romance has been this season. But the discussion about his body not doing what he wants it to, and learning to understand and acknowledge his limits. That’s the kind of stuff I can get behind.

Maybe I missed something. I know that not everyone ships the same thing and this show can’t dedicate enough time to romance to flesh it out completely, but I can’t work out why they’ve treated Peggy and Daniel’s relationship like it’s this tragic lost love. Season 1 ended with Peggy calling Sousa on the fact that he put her on a pedestal so he didn’t see her as a person. It was super powerful, one of the BEST moments of series. Then Season 2 starts and they’re acting like Peggy’s always been into Sousa. I just don’t get it, and it’s taking valuable time from relationships that I actually care about – like Peggy and Jarvis.

The romance subplot did lead to a lovely exchange between Jarvis and Peggy, though, so I can’t hate on it too bad. Dr. Thunderstruck is still great, but his moments didn’t involve Peggy at all. The scenes between him and Ana bonding over being left behind as they people they love run towards danger were delightful. And the exchange between Wilkes and Whitney Frost was brilliantly brutal. I can’t wait to see what those two get up to together next week.

Really though, it’s the women that steal the show. The middle of this season has been a little male-heavy for my tastes, and I’ll admit I got a little bored. After this week’s double ep featuring some fantastic moments from Peggy, Dottie, Ana Jarvis, and Whitney Frost, it’s pretty easy to see why those episodes fell a little flat.

Last week, Whitney Frost lost a little bit of her edge when she was foiled rather easily by Peggy and her team of misfits. She also seemed to lose focus, coming across as simply insane rather than menacing. This week, though, she was back on form and super scary. The scene where she uses the dark matter to devour half of the Council and her own husband after he turned on her was genuinely horrifying. Then again when she interrogated Dottie – who proved earlier that she was not going to be broken by torture. The way we saw Dottie’s strength and then showed that Whitney was stronger was a fantastic way to show that Whitney is not someone to be trifled with.

Whitney’s final act of violence was the perfect way to cement her as a proper villain. She didn’t use her power; this wasn’t accidental or a science experiment. She shot Ana Jarvis – who finally got some actual character development this week – when she didn’t have to. She was willing to kill an innocent woman to get her way, in spite of all her talk about doing it for those that are downtrodden. Whitney Frost is a real life bad guy and I love her. As long as they don’t waste too much time on the boring awkward romances, this season’s finale is shaping up to be an adventure.